Somehow it’s taken us until September to get around to our second stint of the Weardale Way (see, The Weardale Way, Day 1).  This week’s walk from Westgate to Eastgate seems a bit of an odd one as we don’t see the River Wear at all, once we have crossed it from our parking place at Westgate.  Our route lies across the fells to the village of Rookhope, then down Rookhope Burn to where it joins the River Wear. This is a very old stomping ground for me; a tributary of Rookhope Burn was one of Martyn’s field sites for his PhD and we unwittingly spent the weekend after the Chernobyl nuclear disaster, in April 1986, camped on the fells above Rookhope while he sampled the water at regular intervals.

Though the map above shows the Weardale Way going along the A689 for a short distance, our OS map took us up the Westgate to Rookhope road for the first mile or so.  The double arrows on the road told us what to expect though the photo really doesn’t show the 1 in 5 gradient in all its glory!

Though the landscape is beautiful, there is evidence of its industrial past everywhere – spoil heaps, quarries and lime kilns – and we spend much of the morning walking along an old waggonway. Some of the limestone quarried here was transported to Consett steelworks but some must also have been used as a flux in smelting the lead ore produced closer to home. 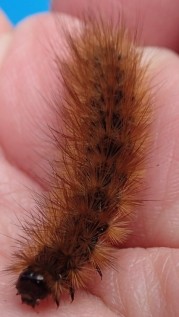 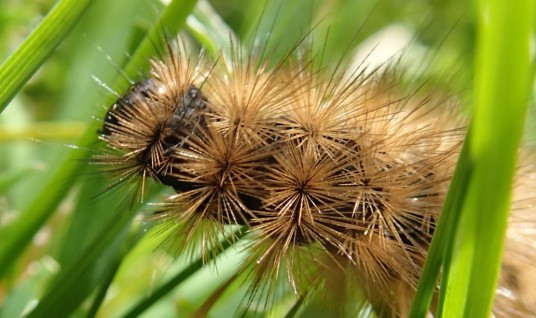 Not all the local industry is a thing of the past – the huge Heights quarry, where limestone for aggregate is still being excavated, is well hidden from the road below but cuts a huge gash in the hillside. For anyone with a passing interest in the geology of the area it exposes a long sequence of sedimentary rocks, of Carboniferous age, from the ‘Great Limestone’ at the base to layers of shale and sandstone nearer the surface – the result of fluctuating environmental conditions when the North Pennines had a tropical location that’s hard to imagine today!

From here the path contours round the hill until we are overlooking Rookhope valley and we enjoy our sandwiches in the shelter of a ruined barn.  The walk down to Rookhope village is uneventful, apart from the field above Smailsburn farm where a very large bull is watching over his cows and calves.  It’s warm out of the wind and the last of the knapweed flowers are full of sleepy male bees enjoying their last nectar, alongside a few Red admiral butterflies.

Modern day Rookhope village is an amalgam of two adjacent medieval settlements which gave their names to Boltsburn and Stotsfield lead and fluorspar mines.  Lead has been mined informally in the North Pennines since at least the 12th Century but these two mines, which opened in the mid 19th Century, took things to a new level.  By the early 20th Century price of lead had dropped and the mineral fluorspar, often found associated with lead ore, had become the more important product.  It is used as a flux in steel making, in the production of fluoride for water and toothpaste and was used to manufacture the chlorofluorocarbons used as aerosol propellants and refrigerants before we knew their effects on the ozone layer.

Dropping into Rookhope village the path takes us through some very bare ground around the old Bolt’s Burn mine workings.  There was an ore-washing plant here and it looks as though the remaining spoil heaps have just been scraped off the surface.  I suspect the revegetation process might be botanically interesting but that’s something to look at another day.

From Rookhope itself we walk down the road a little way and then across a footbridge into the field on the east side of the burn.  What looks at first to be another waggonway across the field turns out to be a stone tunnel running under the field – maybe a mill race of some sort, though there seem to be no buildings close by?

A little further down, in the woods, we come across ruins including the remains of a structure which has clearly housed a large wheel – I’m not sure whether this was a mine engine house or the site of a water wheel. Both disused mines and abandoned quarries are marked on the map and water power was certainly used to power the bellows of the lead smelt mills. There are not so many plants in flower now but the old meadow areas still have plenty of Tormentil, Devil’s-bit scabious and harebells to enjoy and Goldfinches are feasting on thistle seed heads. 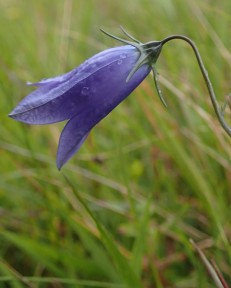 It’s not far from here to the end of our walk at Eastgate though, as so often when we were walking Hadrian’s wall last summer, the pub is closed and we have to wait for our cup of tea. We’d dropped my bike here on our way up the valley earlier (have I learned nothing from last year? ) so I set off back to Westgate to collect the car – a mercifully short ride this time, across the ends of our loop, though more uphill than I’d noticed in the car!