The great wall of Hadrian, Day 5

Ed deigned to join us for Thursday’s walk along Hadrian’s wall, from Brocolitia to Port Gate, despite it lacking the drama of the last Great Wall he visited.  We didn’t escape the standard Chinese hand gesture in photos though!   It was great to find the Corbridge Coffee Company van in the car park again. 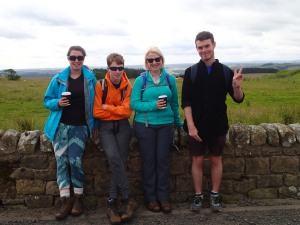 Although today’s end point was around 40 m lower than our starting point, it was far from the gentle downhill amble some of us had been expecting – the first three miles or so are downhill to Chesters fort and Chollerford, on the river North Tyne, but then the path climbs steeply up towards St Oswald’s church on the east side of the river.  I’d forgotten how much up and down there is in this section is when I volunteered to drop off my bike at Port Gate and cycle back to pick up the car from Brocolitia after our walk!

The first section along the wall and vallum from Brocolitia is gentle enough and I enjoy some different flowers – Betony, amongst others.

We walk along a reconstructed section of the wall as we drop gently down towards the North Tyne at Chollerford and the fields are full of golden barley. 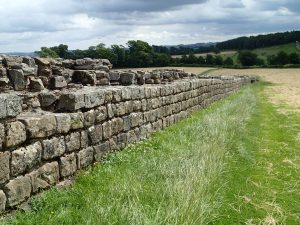 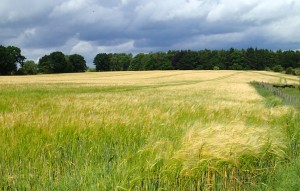 The boys are getting hungry by this time but the heifers in the field are a little too interested when Ed stops for a snack. 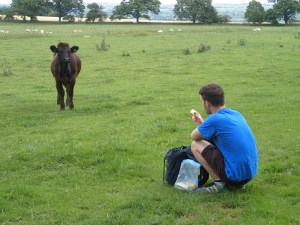 The (big) children are tempted to try and catch some of the many moths and butterflies we see, though that mostly proves easier said than done.…. 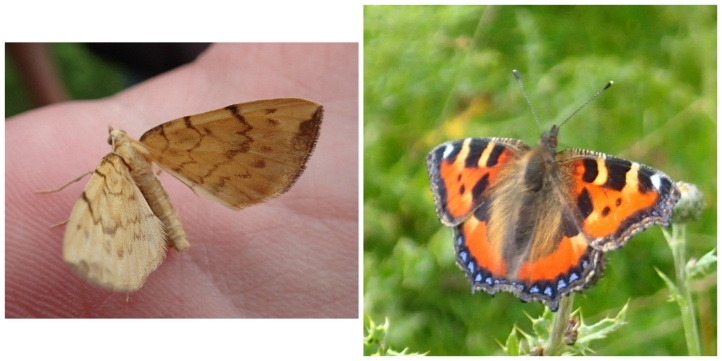 We pass some beautiful houses as we drop down through Walwick towards Chesters – we are particularly taken by one with two huge trampolines in the garden and another with stone lions guarding the gate and a box labyrinth! 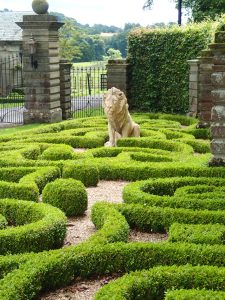 The picnic benches and toilets at Chesters fort are very welcome though Ed and Susannah’s thoughts have turned to fried egg sandwiches, for some reason, so we end up stopping at the tearoom half a mile further down the road for them to have ‘second lunch’. 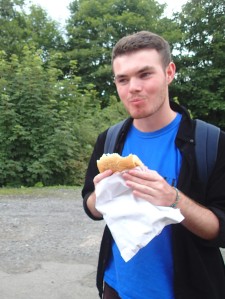 We cross the North Tyne at Chollerford and stop on the bridge to watch fish leaping the weir and the heron poised there waiting for anything small enough to catch.

It’s getting warm by this stage and the pull uphill to St Oswald’s Church and farm feels like hard work.

I’m intrigued by a particularly large, and ancient looking, oak tree by the path. A rough estimate gives it an enormous girth of nine meters.  This gives it an age of somewhere around 850 years old, according to the Woodland Trust’s ready reckoner! 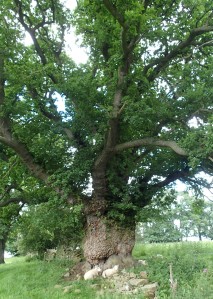 Once we are home, I am able to identify the tree on the Woodland Trust’s interactive map of ancient trees.  It is tree number 23487, with an official girth of 7.76 m which means it is actually more like 650 years old.  This still means it has been around since 1350, when Edward III was on the throne and the Black Death was ravaging England!

We bemoan the fact that St Oswald’s tearoom has now closed, and press on to Post Gate, where the A68 crosses the wall.  Robert finds plenty of squeaky gates to encourage us to move a little faster and plenty of baled hay to clamber on – more appealing than today’s trig points, for some reason. 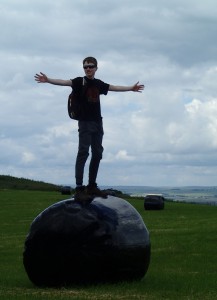 From here it is mostly gently downhill.  The vegetation has changed again, back to more heathland plants. 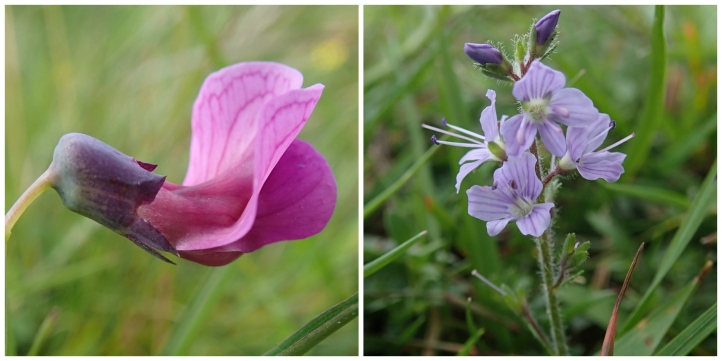 The other interesting thing we come across is a spider in an almost spherical web – I’ve no idea what it is. 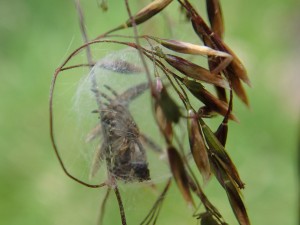 Some patches of woodland provide welcome shade but the last patch we walk through has been felled recently.  It’s intriguing to see that the wood sorrel leaves which looked so healthy under my sycamore tree last week (see Sycamore in summer) are folded up like umbrellas on the open ground.  Their sensitive photosynthetic machinery is being overwhelmed by the high levels of light so the leaves need to minimise the surface area exposed to the sun.  Cells in the hinge areas are sensitive to blue light and turgor pressure changes here cause the leaves to fold down.  This can be reversed when light levels drop again.  I suspect these particular plants will not survive long in such an exposed position, but there will probably be a spectacular show of opportunist foxgloves to replace them next summer. 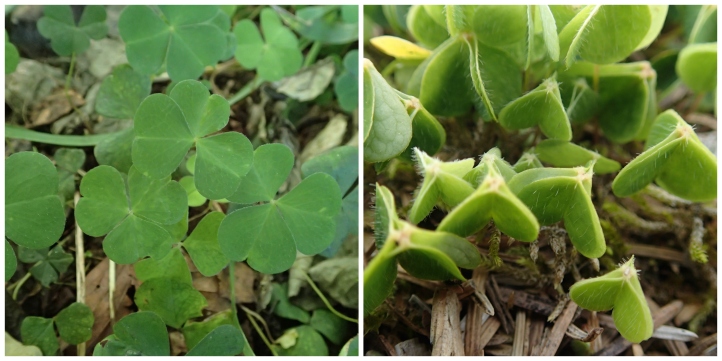 We are glad to arrive at The Errington Arms at Post Gate and I, for one, am really looking forward to a cold, if alcohol-free, beer.  Sadly, this is not to be – the pub is closed between three and six pm.  So, there is nothing for it but to get on my bike and high tail it back to Brocolitia to collect the car – the most energetic part of the day! 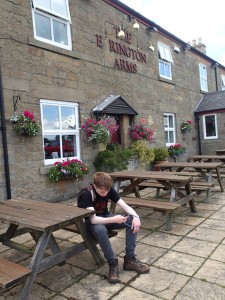 The next stage of our wall walk will have to wait until September now as I’m off to India in less than a week with ‘Rocks, Routes and Shoots’ to walk in rather more dramatic scenery – a hard life!