So who’d noticed that oaks have catkins?  Maybe the fact that they emerge more or less at the same time as the leaves distracts us.  Like many trees, oaks are wind pollinated, so don’t need showy flowers to attract insects – dangling catkins are perfect for dispersing clouds of lightweight pollen over long distances. In fact tree pollen, in general, is one of the biggest allergens for hay fever sufferers for this reason. 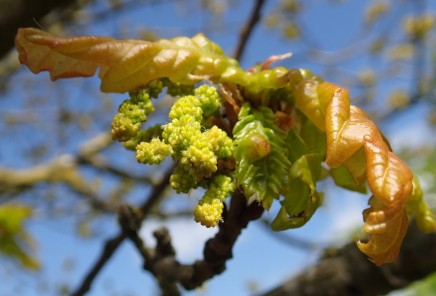 Oak catkins with flowers not quite open on May 9th

The male flowers in these catkins are about as simple as they can be – just a cluster of stamens and anthers which, when they split open (dehisce), reveal a brown interior.

Oak’s female flowers are even less conspicuous, located at the tips of branches. My tree has a girth of just 75 cm, so is only about 30 years old, and oaks don’t produce acorns until they are at least 40 years old so I wondered whether that meant the tree wouldn’t produce female flowers yet.  However, it seems that acorn production must fail further down the line as, at the tip of some branches, I can see minute pink flowers, just a couple of mm across. 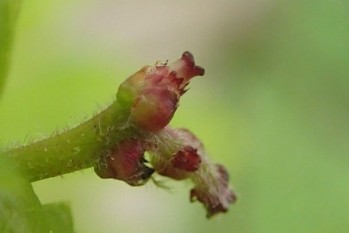 Much more obvious than the flowers, though, are the galls which stud the leaves and branches, looking like under-ripe redcurrants.  Thanks to Sue Antrobus, I now know that these are indeed currant galls, produced by the gall wasp Neuroterus quercusbaccarum.  They are produced on both the stamens of the male flowers and on leaves, depending on where the wasp lays her eggs. 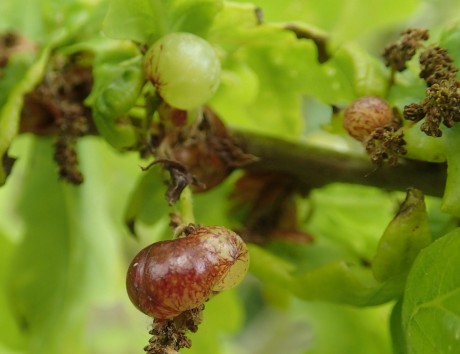 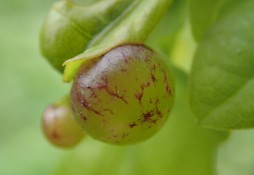 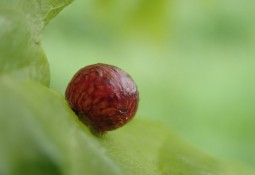 Over the last couple of weeks the oak leaves have lost their initial reddish hue and are now a beautiful fresh green.  The initial redness was due to anthocyanin pigments, which are thought to make the tender early leaves just that little bit less appealing to herbivores – they don’t seem to deter gall wasps though!