Cyprus one year on

Last April, we visited Cyprus on a family holiday and were sufficiently taken by the place, particularly the Tróödhos mountains, to think that it would make a very good place to run a field trip integrating ecology and geology in a warmer setting than Alnwick.  The geological formations in the image below correspond very closely to several of the seven botanical divisions into which Cyprus is usually divided so links are very apparent. 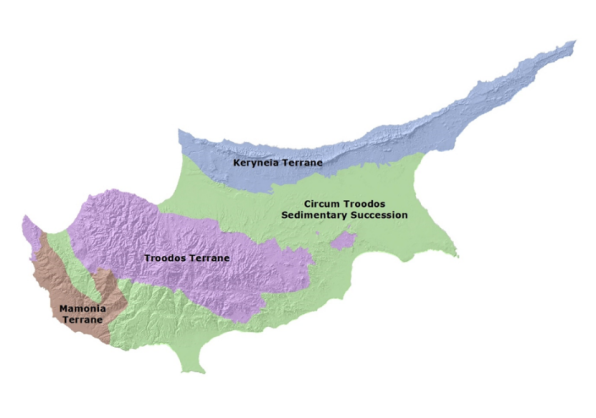 Region 1 is the Akamas peninsula, 2 the Troodos massif, 3 the Paphos and Limassol areas and 4 the Larnaka and Famagusta areas (mostly cultivated land). Regions 5, 6, 7 and 8 are in Northern Cyprus, occupied by Turkish since 1974 and include the Pentadaktylous mountains around Kyrenia.

Map from Illustrated Flora of Cyprus by Yiannis Christofides

With this in mind, John and I have just come back from a reconnaissance trip, our other halves coming along for the ride/providing logistical support. In just a week, it was impossible to cover everything Cyprus has to offer but we managed to visit five of the botanical regions, concentrating mostly on three; the Tróödhos mountains, the Pentadaktylous mountains and the Akamas peninsula.

But what a difference a year makes!  When we visited in April 2018, the lowland areas of Cyprus were hot and dry, with much of the spring vegetation already looking distinctly desiccated.  This year, after a cold, wet winter and early spring the vegetation on untilled ground around Paphos was lush, full of colour and audibly buzzing with pollinators.

We spent our first morning exploring Paphos Archaeological Park, marvelling again at the intricacy of the mosaics on the floors of Roman villas up to 1800 years old and enjoying the wide range of ‘weedy’ species growing around the site.

Part of a mosaic floor in the House of Dionysos, Kato Paphos

The area round Paphos is a mixed bag of relatively young sediments, in geological terms.  Plenty of colourful legumes amidst the riot of colour testify to the thin soil.

Trifolium argutum (the pink and white clover in the large photo above) has Near Threatened status in the IUCN Red list so just goes to show that a ‘weed’ is very much in the eye of the beholder!  There are other coastal specialists such as Limonium, with its distinctive white petals and purple sepals, too. 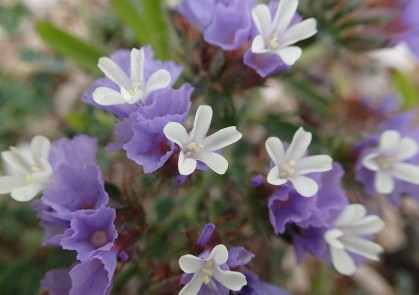 I have to be dragged away after finding 40 or so species in flower for us to head for the Tróödhos mountains which is supposed to be out first proper ecology destination!