We’re here! After a rather stressful journey to Heathrow (discovering the car MOT had run out, hiring a car, a 4.5 hour drive turning into a seven hour one because of road closures on the A1) we were all delighted to arrive at Chengdu airport in one piece. It turns out Sophie is even better at sleeping on planes than me and managed a solid eight hours of sleep on a ten hour flight, sleeping right through a very forgettable 11 pm dinner service!  We were even happier to find the taxi driver Ed had arranged to meet us at the airport and finally get into our AirBnB apartment, after some difficulties working out the number we were looking for.

First impression of Chengdu; the weird disjunct between the juxtaposition of the familiar and the completely strange.  Nearly everyone is dressed in western clothes, there are plenty of smart cars on the busy roads and we pass Bentley and Lincoln dealerships on the road into town from the airport. But we can’t read anything – the ubiquitous Mandarin pictograms are so completely unrecognisable that we have no idea what shops are selling or how to find the correct apartment in the block we are dropped outside.  The number of blocks of flats 40 or more stories high is something else – older four or five storey blocks, with roof gardens, are dwarfed by their neighbours. Ginkgo and other trees line many of the roads and there are bright patches of carpet bedding but, when we see these being planted, it is by groups of people including children, in traditional conical hats, who obviously don’t enjoy western levels of comfort.  My botany antennae are piqued when I realise that what look like pink lupins in the flower beds are serried ranks of foxgloves.

Ed finished work and arrived at our apartment within an hour or so of us and, after restorative cups of tea, we ventured out in search of dinner.  The driving is random – cars, bikes, electric mopeds share the same space and seem happy to cut any corners available.  No sooner had Ed assured us that, despite this, there are very few accidents when there was a loud bang as a taxi shunted into the back of a car at the next junction. Ed suggested a Sichuan hotpot with skewers for dinner, so we could choose what went into the pot, so we wandered around until we found a restaurant with the skewer pictogram, which he recognised (makes a certain amount of sense):

We picked a selection of vegetables (okra, pumpkin, Chinese asparagus, mushrooms and potato slices were popular), tofu and a few bits of meat (hotdog sausages) for Harry and the lady cooked them in a large pot of broth, before bringing them to our table in a bowl. 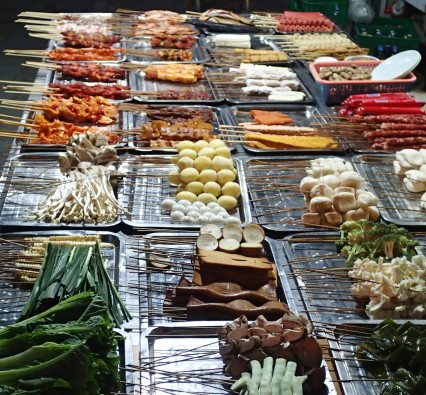 We each had a saucer of crushed peanuts and chilli flakes to dip our vegetables into and a bowl of boiled, sticky rice to take away the heat of the Sichuan peppers in the broth. 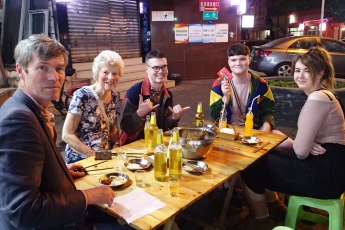 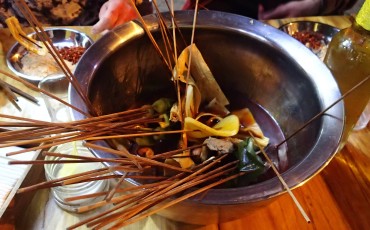 Ed recommended we try the brain but some of us baulked at this.  He also told us that some of the mushrooms we’d chosen are called ‘see you tomorrow’ mushrooms in Mandarin, for reasons I don’t feel I need to explain. The whole lot, with beer, cost around £15 for six of us!  I now know two pictograms – the one for skewers and the one for the noodles Ed suggested we had for breakfast – chopsticks resting on a bowl of noodles.

More oddness – after our dinner we walked one block further to find Starbucks, MacDonalds and a host of high-end clothes and jewellery shops lining the main street, Zongfu Road.  We stopped to buy ice creams for dessert and ate these walking back to the apartment before heading to bed for an early night.  10 pm Chengdu time is only 3 pm UK time but we’d had a long day!