So, this is the third of my series of monthly walks around more or less the same five mile route, looking for anything I can find in flower (see BSBI New Year plant hunt).  It has taken me a little longer to get this month’s walk in than expected, partly because much of the route was under up to a foot of snow at the beginning of March and I thought the vegetation might need some time to recover!  This afternoon we were promised mild weather, with sunny intervals, so it seemed an auspicious time for a walk.

Heading up towards Old Quarrington I saw many of the usual suspects – daisies, white dead-nettles and dandelions, all looking rather sorry for themselves.  Beneath the hedgerows, hedge bedstraw now covers the ground, starting its mad race up through the branches before hawthorn leaves block out all the light.

I soon realised there were decisions to be made about what should and shouldn’t be included in my list of species – how rigidly am I going to count only ‘wild’ flowers?  What about the naturalised snowdrops everywhere in the hedgerows and the young native trees planted alongside the new road?  I think the snowdrops should count, as they are so widespread, but the crocuses and the single daffodil I saw in flower seem too obviously planted to be included.

The vegetation beside the track above the farm has been cut down and the hedgerows flayed brutally since my last visit but I do spot my first coltsfoots of the day, sheltering in the ditch.

Coltsfoot has to be one of my favourite spring flowers for its sheer exuberance. The flowers seem to appear from nowhere, coming as they do before the large horseshoe-shaped leaves which give the plant its name.

There is even more standing water on the path into the nature reserve than last month and, in the end, I decided to skirt round the ponds – it is too wet to get closer and not much is going to be growing in these conditions. Added to this, the Exmoor ponies are still on site and seem much more curious than previously – adopting my classic botanist ‘bum in the air whilst looking for orchid rosettes’ pose doesn’t seem very wise! 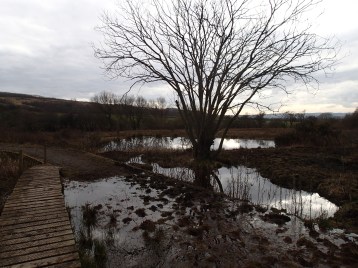 I’m intrigued to see the green algae in one puddle bubbling away and, when I get home, notice that the bubbles are acting as tiny lenses, allowing me to see individual filaments of algae.

One advantage of my detour is I find speedwell growing in the field alongside the reserve.  I’m supposed to be working out the floral formula for a speedwell flower as part of my Identiplant course, so dutifully take a small piece home. Sadly, by the time I get home, the flower has dropped off and I’m none the wiser about its structure though hopefully I’ll be able to find one closer to home before too long.

Coltsfoot is still the only flower on my favourite bit of scree above the ponds but more tiny rosettes are appearing.  The blue-grey colour of yellow wort leaves is distinctive, as is the shape of new Carline thistles leaves, but I’m not sure about this unusually-symmetrical one – watch this space! 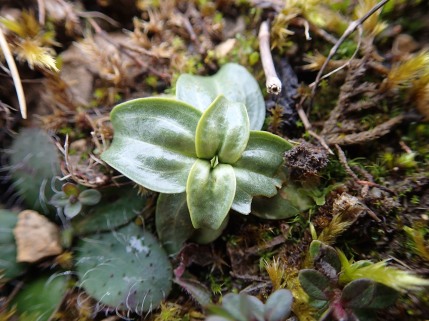 Perhaps surprisingly, something seems to be using the area to stash hazelnuts, judging by the broken shells and involucres lying around.

The leafy bracts or involucres which protect developing hazel nuts

As I walk back down through the reserve towards Coxhoe, last month’s hazel catkins are more or less over but the alder ones are just opening.

One thing that does give trees colour at this time of year is the abundant yellow lichen cladding many branches. This is probably Xanthoria parietina, which has increased dramatically over recent years.  I rather like the colour it brings but it is a sign of atmospheric pollution, thriving as it does in response to increased deposition of nitrates and ammonia, particularly along road verges.

As I reach the road up to Coxhoe landfill site, the settling ponds below it and their overflow look even more post-apocalyptic than usual.  The landfill site was once a limestone quarry, so I’m hoping the leachate is just the chalky water it looks like…

I’m saddened to see, as I walk back along the road to Bowburn, that diggers are moving in to the land opposite St Marys Terrace, earmarked for more new houses.  It may not be Greenbelt, but it’s definitely a greenfield site.  I’m wondering whether the hedge bounding the site, with its masses of naturalised snowdrops, will be left for everyone to enjoy or whether I should go and liberate some of the snowdrops one night – now is the perfect time, when they are still ‘in the green’.

At least the native woodland planted along the path down from the new section of the A688 towards home is starting to look more established and the pine trees there will soon be in flower.

I’m hoping we are finished now with the snow for this year, so spring can really get underway.   It’s beginning to sound like a familiar refrain, but I’m hoping for a rather more diverse list of plants in flower by April!