In my last blog (In praise of the Polygonaceae) I looked at some of the reasons we should love the Polygonaceae, but not all members of the family are quite so appealing.  The same heads full of nut-like seeds which make buckwheat a good raw material for flour also mean plants can spread rapidly across the countryside and many also spread by means of rhizomes – stems growing below the ground which send up new shoots. Trying to dig these out only results in fragments with rooting nodes being more widely distributed.

Travelling through Spiti and Lahual in August 2016 we saw the frothy white flowers of Persicaria wallichii (Himalayan knotweed) along roadsides everywhere.  We were not surprised, though not best pleased, to find it dominating the landscape in lower lying areas of the Valley of Flowers either. Pretty as it is, at up to 1 m tall, with 20 cm long leaves, the plants easily shade out smaller alpines and erode biodiversity.  Taken to North America as an ornamental plant, it has naturalised along the Pacific coast and is in danger of becoming an invasive weed there too. 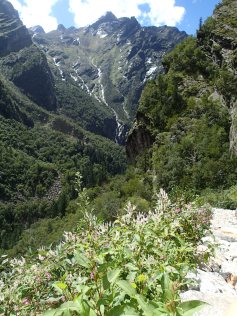 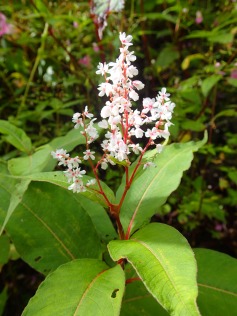 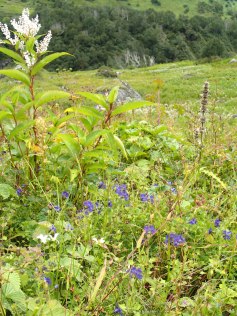 In Britain and many other countries Himalayan knotweed’s more easterly relative, Fallopia japonica, (Japanese knotweed) is already a serious invasive weed – one of the world’s 100 most invasive, species according to the IUCN. Looking at its autumn colours, its easy to see why Japanese knotweed was brought here as an ornamental plant, arriving at Kew Gardens in 1851.

However, with hollow, bamboo-like stems which can grow three to four metres tall, this rapidly-growing knotweed can quickly shade out its competitors and has spread widely throughout the UK.

Like Himalayan Balsam, Japanese knotweed spreads along river systems and roadsides, making use of the free transport offered, despite the fact that it does not produce fertile pollen and seeds in our climate.  Knotweed can tolerate a wide range of soil types and temperatures for vegetative growth and shoots up quickly from its deep network of rhizomes when cut back, making any attempt at eradication a Sisyphean task.  Shoots can easily break through hard structures such as walls in the built environment and, because the plant can regrow from tiny fragments of rhizome, the problem doesn’t end even if you can dig it all out.   Knotweed must be disposed of as controlled waste in the UK, which means you have to take it to a licensed landfill site.  Systemic herbicides such as glyphosphate can be effective, if used repeatedly when the plant is flowering in autumn, but great care has to be taken with any herbicide used near water. The costs of controlling knotweed are very high – it cost £70 million to clear just 10 acres of land for the London 2012 Olympic Park.

As landowners in the UK are under a legal obligation under the Wildlife and Countryside Act to prevent the spread of knotweed on to other’s land, having it on your own land can affect your ability to sell your house or, indeed, to get a mortgage on a property.  The Centre for Ecology and Hydrology has set up a citizen science programme to provide a nationwide risk rating for knotweed to try and help with this and there are trials going on to control the weed biologically.  A tiny insect called Aphalara itadori, one of the plant’s natural predators in Japan, feeds preferentially on the knotweed’s meristem and, in doing so, weakens the plant and prevents its regrowth.  Apparently, the young shoots are eaten as a foraged vegetable in Japan but the description of its stems as being like extremely sour rhubarb, even after soaking to remove some of the oxalic acid, doesn’t tempt me!

I have another Fallopia with similarly rampant growth in my own garden – F. baldschuanica, commonly known as Russian vine or, more revealingly, Mile-a-minute vine.  I planted it to provide a screen for my compost bins but it now uses the 10 m tall Swedish Whitebeam next to it as a climbing frame, scrambling right to the top and covering the tree in a froth of white blossom.  Although not generally seen as an invasive species, it doesn’t take much imagination to see how it could become one!