I’ve wondered about this before, but never really answered the question to my own satisfaction – why is it that at this time of year (March) so many of the plants we see in flower are monocotyledons or monocots for short?  Think of snowdrops, daffodils, irises, tulips and crocuses, for example. 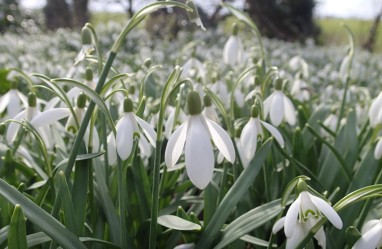 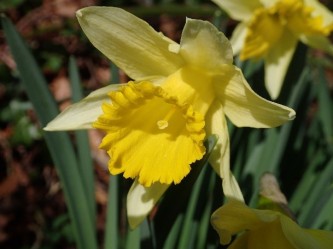 It was the same last Easter when we were in Uzbekistan, the source of some of our spring garden flowers – irises, lilies, tulips and star of Bethlehem.

For practical purposes, plant taxonomists traditionally divided the flowering plants (angiosperms) into two groups – monocots and dicots – on the basis of the number of embryonic leaves (cotyledons) inside their seeds.  Monocots, as the name suggests, have a single seed leaf, whilst dicots have two.  However, since the 1990s we have been able to use inherited differences in organisms’ DNA sequences as a kind of molecular clock to obtain information about their evolutionary relationships. If we assume that the rate at which changes occur in organisms’ genetic code stays the same over long periods of time (millenia), then the longer it is since two species separated from each other, the more differences there will be in the sequence of bases which makes up their genetic code.  We can use this information to produce a molecular phylogenetic tree, which may show new and surprising evolutionary relationships.

Such research has shown us that the dicots are not, in fact, a single group made up of all the descendants of a common ancestor but diverged from this ancestral line at different times.  Some, like Magnolia and its relatives and the so-called basal angiosperms (including water lilies, Nymphaea), diverged before the monocots, previously thought to be the oldest lineage. 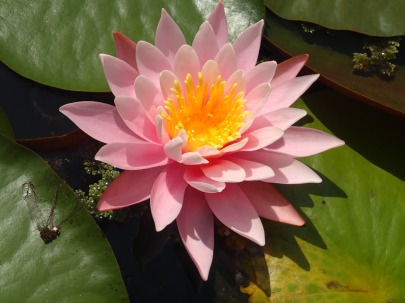 Cladogram showing the position of the monocots within the angiosperms, as of APG IV (2016)

Most of the species we’d previously have called dicots now fall in the eudicot category, though the separation of the five groups within the core angiosperms in the diagram above occurred over a relatively short timescale (around 4 million years) compared with angiosperm evolution in general.   However the term dicot is still used, sometimes, to mean anything that isn’t a monocot and that’s what I’m going to do here.

The monocots, in contrast, are a monophyletic lineage, comprising all the descendants of their common ancestor.  The group have a number of distinct morphological features, apart from the single seed leaf, which makes them fairly easy to spot; their leaves are usually long and thin, with veins running parallel to the edges rather than in a branching network, for example. Flower parts are in threes, or multiples thereof, rather than the fours and fives more typical of dicots.

Monocots also lack lateral meristems so can’t do secondary growth, which is the lateral growth that accompanies increase in height in dicot trees and other large perennial plants – more on the significance of this to come…

Orchids are the largest family of monocots but the grasses are the most economically important, including all our major cereal crops, sugar cane and bamboo.  The various palm trees, bananas and plantains, leeks, onions and garlic are all monocots, as are spices such as ginger, turmeric and cardamon. 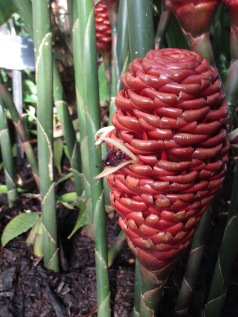 But maybe I’m barking up the wrong tree here – all the early-flowering monocots I’ve been thinking about are, apparently-coincidentally, perennial species which rely on underground storage organs. They mostly reproduce themselves vegetatively from bulbs or corms (both modified sections of underground stem) rather than relying on seeds.  Is this the key to their early flowering?  After all, that other early staple of British woodlands, the wood anemone, is not a monocot but does spread largely via underground rhizomes. 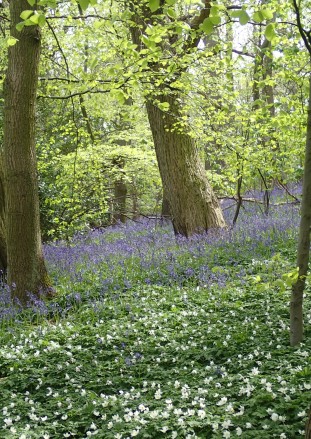 There are all kinds of reasons why plants which flower early might want to rely more on vegetative spread than on seed production – there are fewer insects around for pollination early in the year; the plant is getting less energy from the sun because light intensity is limited; temperatures are lower so all the reactions needed for growth take place more slowly.  Although we grow many of these species in our parks and gardens for spring colour, their natural habitat is often on a woodland floor where rapid completion of the growth cycle is necessary before the trees above completely block their light.  I thought about this a lot in 2016 when I followed the progress of a sycamore tree and its understorey through the year.

However, vegetative reproduction and monocots are not quite as unrelated as you might think. Root growth in monocots is affected by the same lack of lateral meristems as the stem – you will never see monocots with the gigantic primary tap root structure of our largest trees.  Instead, monocot root systems are forced to branch early and repeatedly to produce a wide network.  Some of these roots are actually adventitious roots, derived from the shoot.  Its easy to see how some of these undergound shoots develop into rhizomes, which often have an additional storage function – bulbs and corms are just specialised versions of these.

Bulbs and corms are short stems which develop underground with swollen leaf bases to store reserves whilst the plant is dormant and, because they are so much larger than seeds, allow new plants to grow rapidly in the spring.   So, I think I’m back where I started.  The real reason monocots seem to dominate our early flora is because of the way they reproduce but the fact that they do reproduce in this way is because of the way monocot roots develop!

Chase M.W. et al. (2016) An update of the Angiosperm Phylogeny Group classification for the orders and families of flowering plants: APG IV. Botanical Journal of the Linnean Society, 181, 1–20.