We knew today was going to be a long day and it was – another 19 or so miles, despite the Camino Ways schedule we’d borrowed saying it should be around 15. We left our treehouse around 8 am and joined the Camino soon after, heading up the hill out of the valley to St Maure de Touraine to buy breakfast pastries. Rosie picked up a slice of pizza for lunch too. It was cool until mid morning today and, despite new blisters, our feet were not too sore, so we made good progress through fields of ripening sunflowers and sorghum – our mystery cereal. Apparently sorghum is being widely grown in France as a fodder crop now because it’s more drought resistant than other cereals. 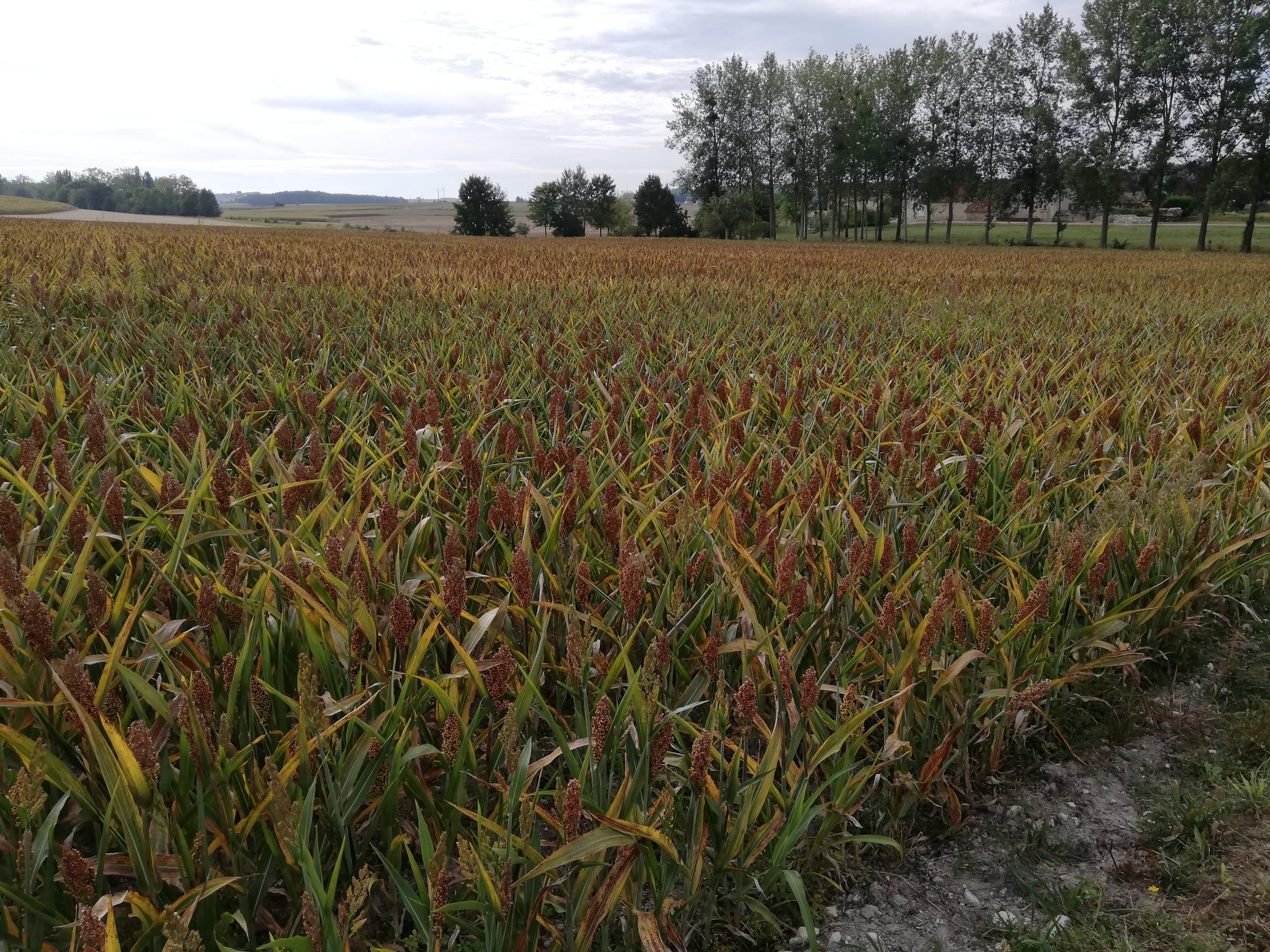 We left St Maure across the 12th century bridge which was the only route across the river Manse for medieval pilgrims and featured an integral, suspended water wheel. More roadside crosses and shrines have appeared to indicate we’re on a pilgrimage route.

Today’s path south zig-zagged back and forth across the main D910 road in a series of loops.  On the first of these loops we came across what’s marked on the map as a dolmen or neolithic burial chamber, from long before the earliest pilgrims.

The dolmen de la Pierre Fondue (or de Boumiers)
There is more livestock around too, evidenced by farmy smells as much as by what we see – most farmyards, like the chateaux, are behind solid stone walls. Maybe for protection for livestock and vegetable gardens against the wild boar still found the region? One farm had a  particularly goaty smell and we realised that the St Maure region has protected origin status for its goats’ cheese! 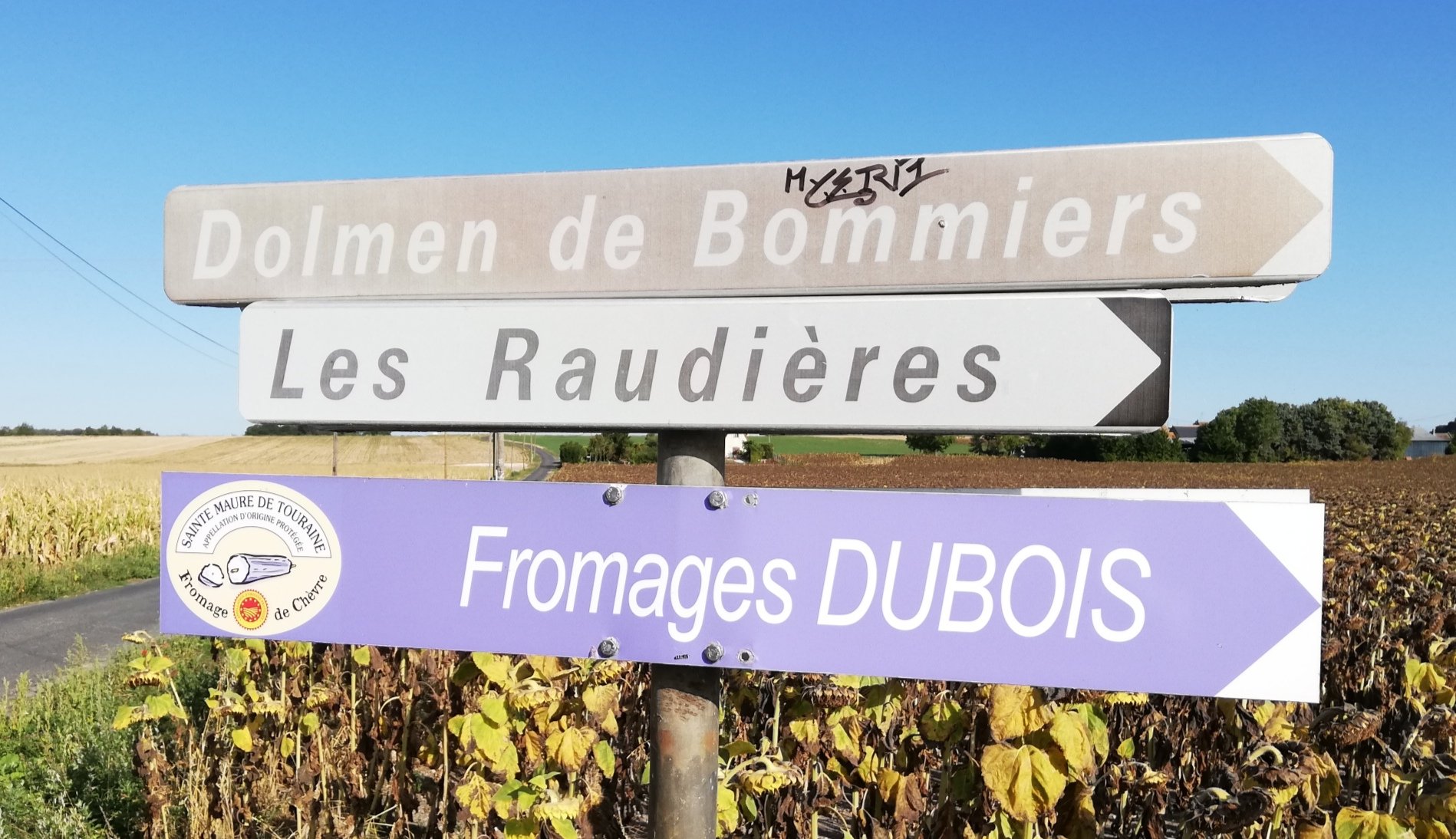 From here we headed to the hamlet of Drache and stopped for a sit down and cold drinks at the only Tabac in town – a slightly dodgy looking place where the chef was eating bread and cheese with wine at 11.30 am! However someone in the bar helpfully told us we could get our Credencios stamped at the town hall until noon so I trotted off to collect my first stamp since Orleans. I’m not going to have quite the collection I ended up with last time.

From Drache we headed on towards Port de Piles (Rosie liked the name) on the far side of the river Creuse, a tributary of the Loire. 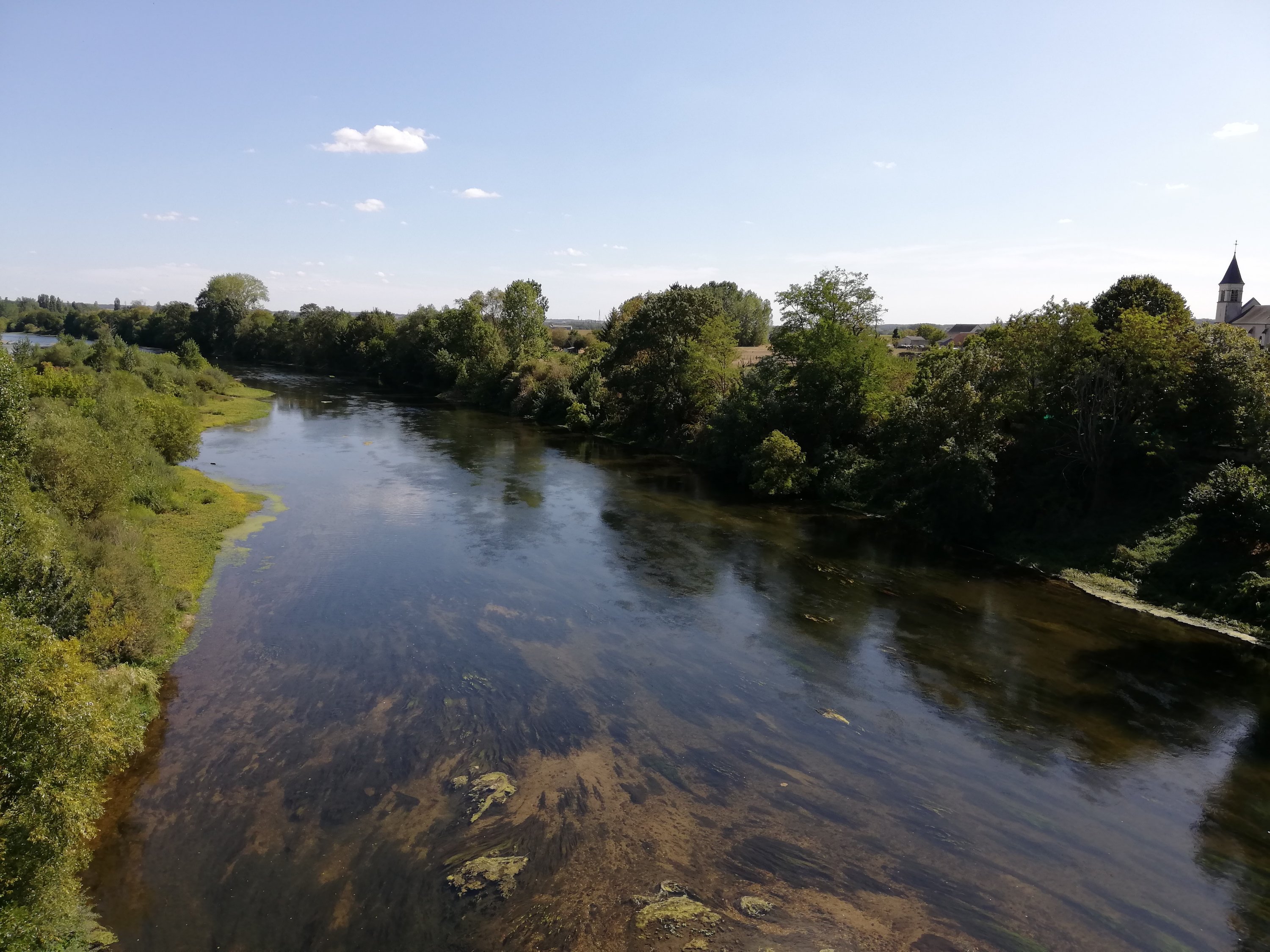 Unfortunately, the name was the most exciting thing about the village, which lacked both an open shop and anything resembling a picnic bench – we ended up sitting on the ground in the shade outside the church and eating what we’d brought with us for lunch. It was very hot by this time and we were keen to avoid the last loop of the day on the hill above Les Ormes so we plotted our own course, as close to parallel with the road as we could get. Apart from one incident where Google maps delivered us to a locked gate where we should have been able to cross the railway, that worked well. We suspect the route hasn’t been updated since the line was electrified and so, dear readers, you’ll be glad to hear that we went up and along to the next bridge rather than climbing the gate.

A long, hot walk along the road into Dange followed so we were very happy to reach our lovely-looking Airbnb. We were even more delighted when we realised our bathroom had a bath rather than just a shower and a choice of luxurious things to soak ourselves in – nothing better for tired legs and feet. The vegetarian pizzas and half bottle of Chinon wine at the local pizzeria were more than acceptable too.

Our Airbnb in Dange – the socks drying on the window ledge are the only thing lowering the tone!