I’m writing this sitting in our most adventurous Airbnb to date, a cosy treehouse 20 ft above the ground, with a compost toilet and a washing up bowl-come-sink which means it’ll be Glastonbury washes (i.e. wet wipes) for us tonight!The area around is equally special – a secluded valley full of troglodyte dwellings carved out of the limestone cliffs, many of which have been extended into distinctly des reses. We’re less than a mile from the A10 motorway as the crow flies but it’s another world. The surrounding trees are full of birds – jays, woodpeckers and treecreepers, amongst others. Our arboreal pad would make a fantastic spot to sit with binoculars. 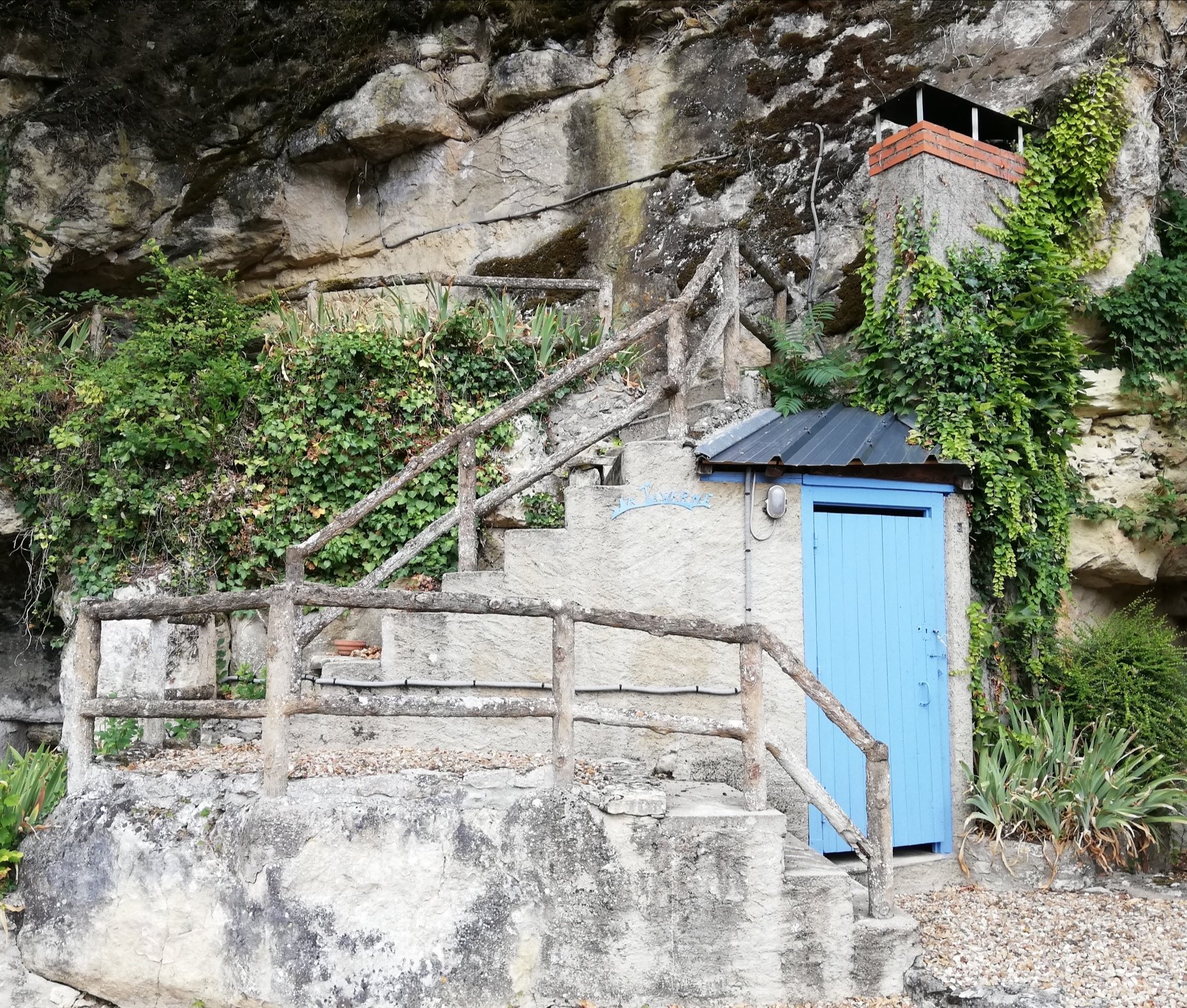 Last night’s lovely Airbnb was only a few metres from the Camino route but we wanted to head back into the village to pick up breakfast, as usual, from the Boulangerie/Patisserie. We resisted most of the chocolate for fear of it melting but I chose a ligot – a bit like a plaited pain au chocolate. All was going swimmingly and we picked up the Camino signs again until, on the outskirts of the village: Rosie, “Are you sure we’re going in the right direction?” Me, “Of course – I’m sure there’s more than one roundabout in Sorigny…. But maybe this is the same one we crossed yesterday…” An about turn and a km or so later we were back where we started and finally on our way, joining the Camino at what looks like a very old stone cross. Fortunately we had a shortish walk planned for today – only 12 miles – and Rosie’s blisters are finally starting to heal so she can enjoy the walk properly. 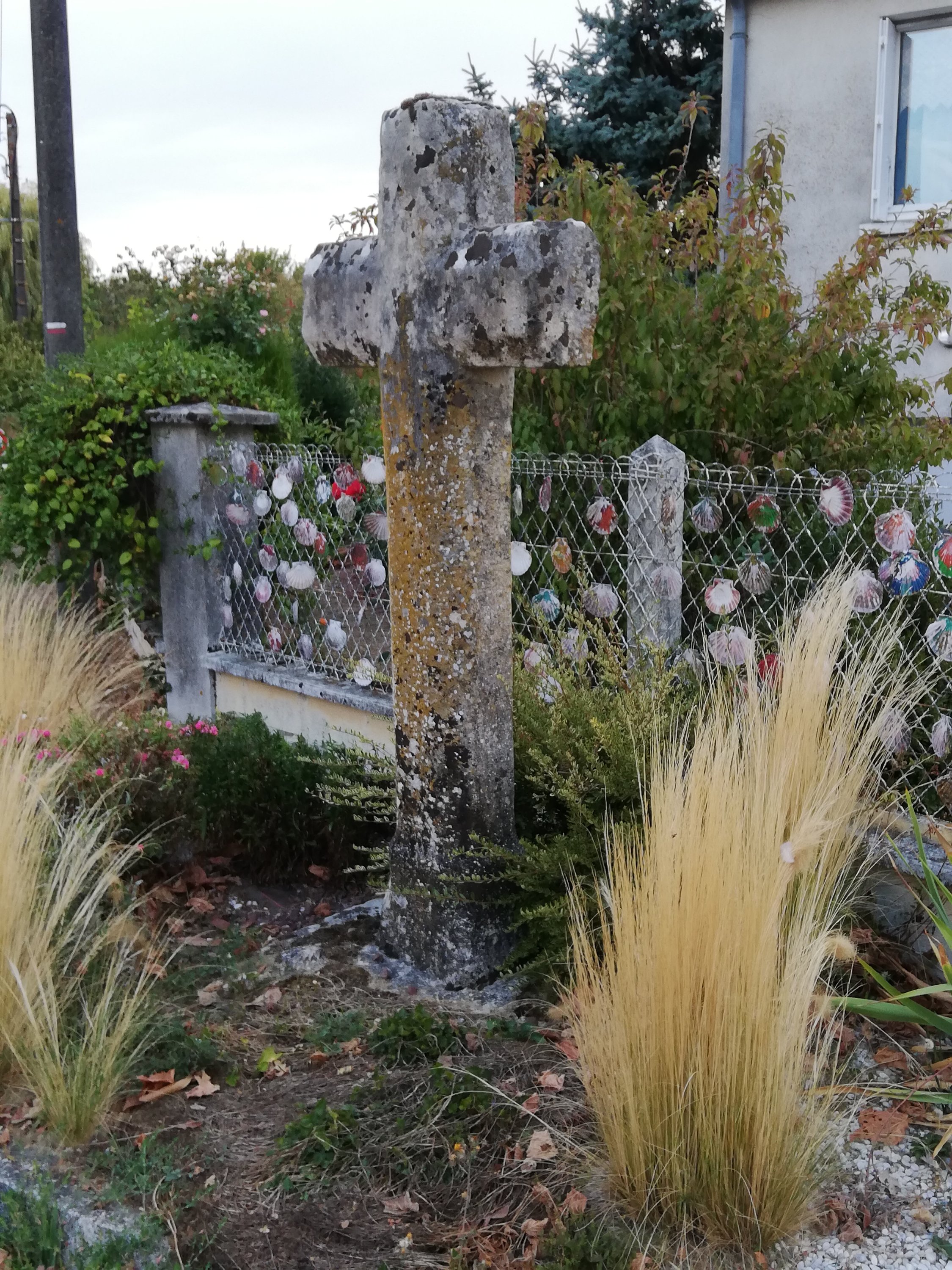 It was pleasantly cool and much of our way lay alongside, or through, dappled woodland. We saw a deer for the first time, gleaning from maize stubble – it bounded away into the woods on a well-worn path when it saw us. We’d planned to be at St Catherine de Fierbois in time to pick up both lunch and dinner as we knew there would be basic cooking facilities here and nowhere to go out and eat and just made it before the single shop shut for two hours at 12.30. Part of the delay was meeting our first genuine pilgrim of the trip, en route to Paris from Santiago and planning to go on to Rome and Jerusalem, carrying all his own camping stuff. We found out more about Alberto later when we came across the first pilgrim rest spot we’ve seen offered; a table and chairs, a bowl of rather overripe plums and an insulated box containing bottles of cold water. The ‘visitors book’ confirmed our suspicions than only half a dozen people a week are walking this part of the route at this time of year and also that Alberto, a pilgrim for peace, started walking in Valencia in June 2013. Either he’s walking very slowly or he’s stopping a lot en route!

We treated ourselves to cheese for lunch as we only had to carry it as far as the shady square in St Catherine and bought pasta and dusty looking tins of tuna, tomatoes and olives to concoct something for dinner. We also, with great care, selected the only half bottle of wine in the shop (ever heard of Cote de Gascogne?) as we didn’t want to carry a full one!From St Catherine it was only an hour or so’s walk to Courtineau where the treehouse is, though finding it wasn’t quite so simple – Google maps shows it a few hundred metres from its real location. We are only 500 m from the Camino route though and Rosie will, I’m sure, make sure we set off in the right direction tomorrow!