The wonderful world of lichens

I’m now starting to think that lichenometry might be one good link between the geology and ecology of the Himalayas. Because lichens can obtain everything they need to grow from the air around them, and the water it contains, they are the ultimate pioneer species. The hyphae of the fungal partner in the relationship provide a framework to shelter the more fragile algal cells. These algal cells photosynthesise and, in turn, supply carbohydrates to allow more fungal growth. Other necessary minerals can be acquired in trace amounts from rainwater and from the imperceptibly-slow dissolution of the substrate on which the lichen is growing. This allows them to grow on bare stone, as well as on more hospitable surfaces such as soil and tree bark. 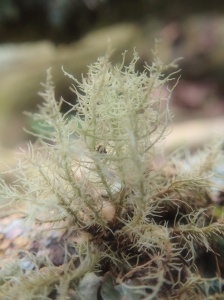 Lichens’ growth strategy means they can survive in the most hostile of terrestrial environments but they trade this advantage off against very limited potential for rapid growth in more favourable conditions. Victims of their own success, as soon as a little anchorage is produced and a rudimentary soil forms, other more raypidly growing species, such as grass and, in this case bilberry (Vaccinium myrtillus), take hold and rapidly out-compete them.

However, because lichens grow at a rate of a just a millimetre or so a year, measurements of their growth can be used by geomorphologists, as well as archaelogists and paleontologists, to indicate how long something has been exposed at Earth’s surface. Lichenometry is particularly useful for dating surfaces less than 500 years old, where radiocarbon dating is less accurate, and one application is in measuring the rate of glacier retreat, particularly pertinent in a warming world. The possibilities of applying this in a Himalayan context would definitely be worth investigating on our trip. 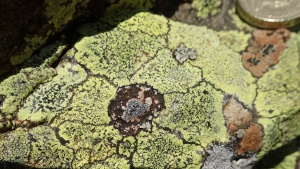