A bit of a thing about orchids

Or so my family will tell you…

The largest family of flowering plants in the Himalayan hotspot is the Orchidaceae; at least 750 species have been reported, many endemic to the region. They belong to more than 150 different genera, including many such as Phalenopsis and Dendrobium familiar to those of us who grow tropical orchids at home as well as Orchis, Cypripedium, and Epipactis which have species amongst the UK’s native orchids. 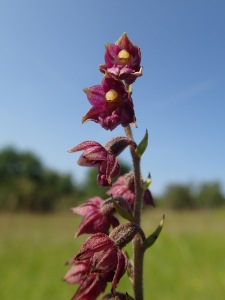 The greatest diversity of orchids is further East than we will be travelling this time, in Uttarakhand, but there should still be plenty to see, apart from our old friend Himalayan balsam (Impatiens glandulifera), sometimes described as Poor Man’s orchid. Orchids are amazing plants, much prized for their stunning flowers. They are monocots, like the grasses, and typically have bilaterally symmetrical flowers with one petal modified and enlarged into a definite lip or labellum. This may be adapted in a variety of ways to attract, and provide a landing platform for, pollinating insects. The ovary, in which the unusually-tiny seeds will develop, is described as inferior because it lies underneath the rest of the flower. 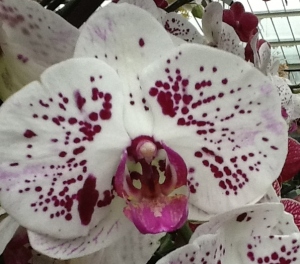 Many orchids, such as Dendrobium, are epiphytes, making their home on the surface of other plants and obtaining nutrients from animal droppings and other organic matter trapped there. They have long aerial roots to obtain the water they need and often have pseudobulbs – thickenings of the stem which store nutrients and water for drier periods. 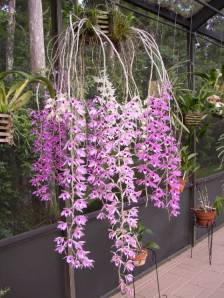 Orchids have a number of features which make them botanically interesting, quite apart from the beauty of their flowers. One is that the seeds are so tiny they have no endosperm – the starch-rich component of most seeds which provides nutrition for the growing embryo as the seed starts to germinate. As a result of this, the seeds will not grow unless they can enter into partnership with the correct mycorrhizal soil fungus to supply the necessary nutrients. This means the chances of any individual seed growing is tiny, and germination in cultivation is slow and tricky. Why would orchids choose such an apparently hit-and-miss method of propagation?
Another odd feature of orchids is that most invest a huge amount of energy in producing showy flowers to deceive insects into pollinating them, rather than providing the standard nectar reward. Darwin was one of the first people to describe orchids’ highly specialized pollination systems in his 1862 book, Fertilisation of Orchids. These usually depend on an interaction between a specific insect and the flower, reducing the chances of pollination significantly. To combat this, the flowers tend to be unusually long-lived – an attractive feature for horticulturalists. They also often carry their pollen in pollinia – waxy masses of pollen held on a sticky pad or viscidium which sticks the pollinium to the body of a pollinating insect. At least this way a single pollinating insect can carry away enough pollen to make sure it is successful in pollinating the next flower suitable flower it lands on.
In the absence of nectar, many orchids depend on the appearance of the labellum to attract pollinators. In bee and spider orchids, this is taken to the extreme – the labellum mimics the shape, colour and odour of a receptive female and pollen transfer occurs as the poor male tries to mate with the flowers.

Other orchids, like many other flowers, use volatile organic compounds to attract their pollinators. Some species, such as Cypripedium (Lady’s-slipper orchids), depend on trapping visiting insects in the modified labellum and only allowing them to exit by brushing past pollen-bearing anthers.

Orchids have been around for a long time – maybe up to 100 million years – and there is also evidence for their coevolution with pollinating insects over many millennia. Insects carrying orchid pollen have been found in amber some 15-20 million years old, which helps to explain their ubiquity.