Visiting my willow tree yesterday I was sadly excited to notice the first catkins of the year.  I was glad of my tall assistant though as all were well out of my reach – I suppose it is obvious that a wind-pollinated tree would produce flowers on higher branches, for maximum exposure to the elements…. 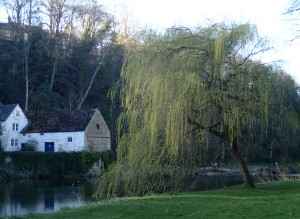 I took some catkins home too, to take better close up photos. 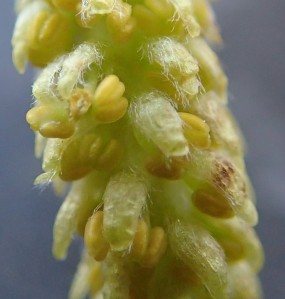 So far, so good.  But my tree books says that all willows are dioecious, i.e. the male and female flowers are on separate trees. Weeping willows seem to be the exception which proves the rule!   The catkins normally hang down more or less vertically on the tree, so having the male flowers at the far end means the pollen from these is not likely to end up on the female flowers in the same catkin, improving the chances of cross pollination.

The scientific name of my tree, Salix babylonica, also intrigued me – where did these trees first come from?  We associate them with willow pattern plates and it turns out that the trees are indeed natives of northern China – rather more genuine than the ‘traditional’ willow pattern story!

Weeping willows were brought to Europe by traders travelling along the Silk Road and have been grown here for hundreds of years.   The father of modern taxonomy, Carl Linnaeus, coined the specific name ‘babylonica’ under a misapprehension that these were the trees described at the beginning of Psalm 137:

However the trees lining the Euphrates river were actually poplar trees; gharab in early Hebrew, Populus euphratica to us.  Perhaps Linnaeus’ error is not so surprising – we do associate willows so strongly with river bank settings in Europe.