What has Scott of the Antarctic got to do with the theory of plate tectonics?

One place we are looking forward to visiting on our trip to the Himalayas in June with Indus Experiences is the Guryul Ravine south east of Srinagar, where we should find fossils of seed ferns such as Glossopteris and Gangamopteris in rocks of the Khunamah Formation. This site is interesting for many reasons – not least because it is one of the few places in the world where the junction between Permian and Triassic age rocks (the P-Tr boundary) is clearly visible.

At this point in Earth’s history, some 252 million years ago, the most severe mass extinction event ever caused dramatic changes to life on Earth and shaped our current marine ecosystems, in particular; around 60 % of marine families were lost, including many corals, crinoids, molluscs, amphibians, reptiles and the iconic trilobites.   Diversity of terrestrial vertebrates, insects and plants also took a serious knock. The reasons for this event are still debated – some diversity may have been lost as a result of gradual changes to the environment but ultimately there was some sort of catastrophic event, which changed things too rapidly for organisms to have any chance of adapting. The biggest suspect seems to be the eruption of the Siberian Traps volcanoes with the production of massive amounts of carbon dioxide gas, and a concomitant sudden increase in global temperature and decrease in oxygen levels in the oceans.

But I digress… Glossopteris and Gangamopteris fossils form an important part of the evidence which first led Eduard Seuss to hypothesise in the 1860s that much of Earth’s landmass had once formed a single large supercontinent. The presence of Glossopteris fossils in South America, Africa, Antarctica and India (see below) was difficult to explain without assuming that these land masses had once been close neighbours, though it was to be a further 70 years before Alfred Wegener came up with the notion of continental drift. 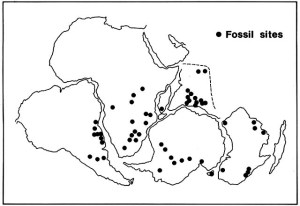 Maybe the most famous collector of Glossopteris fossils was Robert Falcon Scott; leaf specimens he collected in 1912, on his final expedition to Antartica, are now in the London Natural History Museum’s collection. Though he didn’t realise the significance of his find at the time, it provided key evidence that Antarctica had once been linked to the other southern hemisphere continents and had a very different climate to that it experiences today.

Both Glossopteris and Gangamopteris are seed ferns – members of an order of plants, the Glossopteridales, which first arose in the early Permian, around 300 million years ago. They disappeared during the Permian-Triassic mass extinction, long before Pangaea started to break up around 165 million years ago (see ‘Flowering plants in the Himalayas’). Around 70 species of Glossopteris have been found in India alone (though see below for a note of caution about this) where they make up an important part of the Permian coal deposits. The plants were woody, deciduous trees or shrubs and probably grew in wet conditions, which has meant they have been preserved unusually well.

Fossils have been found of many parts of Glossopteris, giving us a pretty good idea of what the whole plants looked like. As gymnosperms, they produced ‘naked’ seeds, which developed on the surface of a leaf or scale in a cone. Where fossil leaves have been found, these are usually in thick layers which represent an accumulation of leaves falling from the tree in autumn. Growth rings on fossilised trunks show that, just like modern deciduous trees, Glossopteris grew rapidly in spring and summer but ceased growing before the winter. 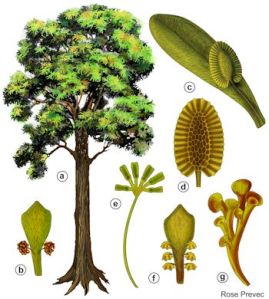 The name Glossopteris comes from the tongue-shaped leaves. Gangamopteris fossil leaves have been distinguished from Glossopteris by not having a midrib, or central vein, in the leaves but there is some question as to whether they are not actually part of the same genus. One of the joys of fossil hunting is that you never know whether you are looking at two parts of the same or different organisms!

Hopefully we’ll be able to see these vital pieces of evidence about how our modern Earth formed for ourselves at Guryul.