Wednesday 1st July – Back to Guryul,

The traffic on the way to Guryul was bad again and it took us a good hour and a half to get there. It was quite hot when we arrived, despite the haze, but there was a bit of a breeze. The first time we stopped to talk I discovered I’d ‘lost’ my camera – I was cross with myself, but pretty sure it would be in either the car or shikara, so not unduly concerned. Helen ended up as expedition photographer instead.

The day seemed to go well – John went through the basics of drawing a field sketch of the whole scene, which was new to at least some people. 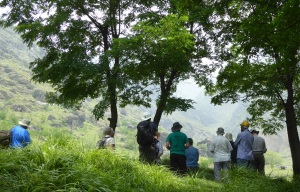 After that we walked up to have a closer look at the Panjal traps volcanic rocks before venturing into the overlying sediments. Even at this altitude (under 2000 m) some of us can just feel it’s slight effect, making us huff and puff a little going up the hills. We were hoping to find Gangamopteris fossils in the sediments and found some possible candidates but the fossils in the shales of the Zewan formation above this were much more impressive – plenty of bryozoans, molluscs and crinoids. Everyone enjoyed finding these and we probably spent more time fossil hunting than John had intended. 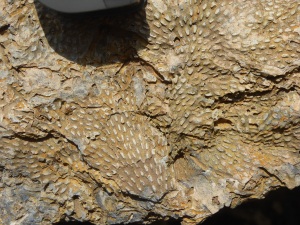 We then walked round the corner for a quick look at the site of the Permian-Triassic boundary before dropping back down the hill and heading for the vehicles and lunch. 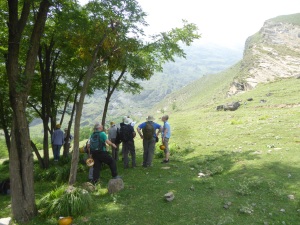 Looking across to the Permian-Triassic boundary

We were happy to see a pair of hoopoes, repeatedly, as well as the paradise flycatcher we’d seen here on Sunday. A group of people who needed to change cash at the bank rather than using an ATM headed off promptly after lunch to get to the bank before it closed whilst the rest of us had a more leisurely lunch then headed back to the houseboat. We got to paddle the shikara again on the way back. 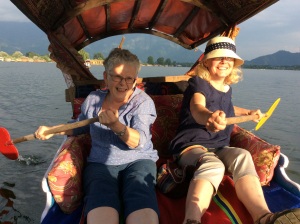 It was a very humid afternoon, with thunder rumbling around, though nothing dramatic happened where we were in the end.  Helen and I did a little more shopping – I bought some pretty paper mâché stars and a small scarf as gifts. Tahir brought Dr Butt over to talk to us pre-dinner – he had some good anecdotes about excursions he’d made as a young geologist, covering long distances on foot. Tahir and Dr Butt had dinner with us, then most people retired to the houseboats to pack.  As an older Kasmiri Muslim, Dr Butt wasn’t fasting, which fits with what the book I’m currently reading (The Collaborator, by Mirza Waheed) says about how Kashmir became much more conservative in its Islam during the 1990s. Dr Butt proudly told us he is 71, so he grew up at a time when things were very different in Kashmir.