There is a sense in which signing up for the whole ’30 Days Wild’ thing feels a bit of a cheat to me, at this time of year anyway, as it’s rare for a day to go past without me enjoying being outdoors in nature at some point. I will have to try some of the ‘wilder’ ideas suggested on the website if I want to give myself a real challenge!

Yesterday’s nature time, though, was on and beside the River Tyne, courtesy of Hexham Regatta. As our eight, made up of ladies largely in their forties and fifties, was rowing against a college crew from Durham we only had to race the once, just as expected. I reckon our total age was probably pushing 200 years more than theirs!

This did give me plenty of time for a walk down the river though, musing on the resilience of the plants on the banks. Like the River Eden at Carlisle , the Tyne at Hexham flooded badly last winter. In fact, Hexham Rowing Club is still without a functional boathouse and the regatta course had to be shortened slightly to fit with changes in the position of gravel banks just about the start line. Clumps of grass lodged in the branches above my head and a beach-worth of sand on, and alongside, the riverside path also testify to the flooding but plenty of vegetation has survived the trauma.

Some of this comes from bulbs, such as bluebells and wild garlic but Himalayan Balsam seeds have obviously survived the flooding too – perhaps no surprise there. Maybe these seeds floated down from much further upstream. 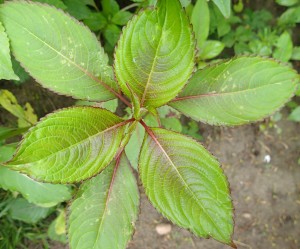 The willow trees on the bank are also showing just whey they are so much used in river bank stabilisation work, shooting away despite their precarious positions.