A visit to our local nature reserve at Thrislington on Sunday afternoon set me thinking again about the interaction between flowers and their pollinators. We watched a hawk moth of some sort fluttering from orchid to orchid, its long tongue well-adapted to trying to extract nectar from the spur at the back of the Early purple flowers (Orchis mascula). It seemed equally happy, however, supping from the tiny flowers of Ribwort plantain (Plantago lanceolata). 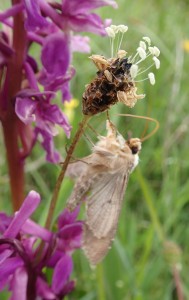 In fact, the moth might have been more successful here as O. mascula doesn’t actually go to the expense of producing nectar. Instead, like many other orchids, it relies on trickery to get its flowers pollinated.

The long spur at the back of the flower looks like it ought to be a rich source of nectar so insects landing on the flower’s lip insert their tongue into the spur to try and find this. In the process, their head comes into contact with the rostellum, the cup containing two sticky balls of pollen (pollinia), and the pollinia stick to the insect’s head. The pollinia are then positioned so as to hit the female stigma of the next flower the insect lands on, depositing some pollen on it. In fact, the pollinia are sufficiently well attached to the insect’s head that they can pollinate the next few flowers the insect encounters. 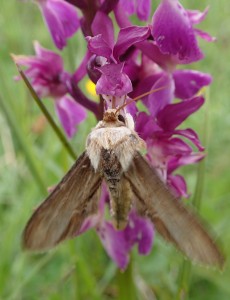 Early flowering helps these particular orchids practice their deception because they don’t have much competition for insects’ attention at this stage in the summer. Their size must help too – some of the orchids we saw towered above the other early summer vegetation at around 20 cm in height.

O. mascula grows throughout Europe, the Middle East and Northwest Africa in a wide range of habitats. In this country, they have a plethora of local and common names. According to Geoffrey Grigson’s ‘The Englishman’s Flora’, these are mostly related to the shape of the plant’s divided tubers, which give the plant both its generic and specific names, as if to hammer home the point! There are actually two root tubers beneath each plant – a new, firm one filling up to fuel next year’s growth and an old, slack one being emptied for current growth, rather like the way a potato grows. Sympathetic magic has always meant that the full tuber is regarded as a source of aphrodisiac food and medicine.

The plant comes up repeatedly in art and literature too. In Shakespeare’s Hamlet, Queen Gertrude calls the orchids ‘long purples’ and ‘dead men’s fingers’ but hints at alternative names when she describes the drowned Ophelia’s garland as being…

“Of crow-flowers, nettles, daisies and long purples, that liberal shepherds give a grosser name, But our cold maids do dead men’s fingers call them.”

Legend also has it that O. mascula grew under Christ’s cross and that the leaves were spattered with his blood and this has given rise to alternative names such as Gethsemane and Cross-flower. Grigson suggests this may have been an attempt by the Church to clean up the plant’s reputation!

Last, but not least, if you look closely you can see an Early purple orchid silhouetted against the unicorn’s white flank in the final scene of the 16th Century ‘Hunt of the Unicorn’ tapestries, where the unicorn is in captivity.