My interest was piqued last week by a tree I’d never noticed before in the university Botanic Gardens; +Laburnocytisus adamii or Adam’s laburnum.  It really does have three completely different types of flowers – yellow, purple and bronze – growing on the same plant. 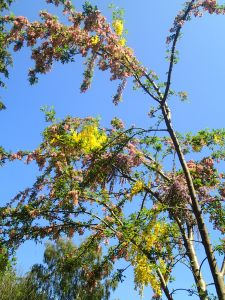 The tag descibes the tree as a graft chimera – broom tissue (Chamaecytisus purpureus) grafted onto a Laburnam tree (Laburnam anagyroides) – in the nursery of a Monsieur Adam, near Paris, in 1825.  It was probably the serendipitous result of an attempt to produce a broom bush with a standard rose-like form.  So +Laburnocytisus adamii is not a single species at all (hence the + in front of its name), but a relatively stable mixture of the two species, with some shoots typical of yellow-flowered Laburnam, some of purple-flowered Broom and some novel, intermediate shoots bearing the bronze flowers.

This set me wondering about how tissue from two different species has managed to coexist and be transmitted together into offspring over such a long time period.  Each plant contains a mixture of cells, some with the genetic identity of each parent – no hybridisation has occurred. This means that cloning is the only way to propagate the plant.  In this particular graft chimaera, Laburnum cells form the core tissue and are surrounded by broom cells so, to produce a new tree, tissue is grafted onto new Laburnum seedlings.

The Florentine Bizzaria is an even older example of a graft chimera, this time between two citrus species of the same genus – Citrus medica and C. aurantium. The tree produces three types of fruit on its different shoots; the Florentine citron, a sour orange and a novel, intermediate form. 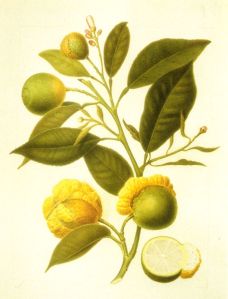 Bizzaria was first produced in the garden of the Villa Torre degli Agli, Florence, in 1640 when a citron bud was inserted into a sour orange seedling, giving rise to a mixed shoot.  Citron plant material forms the core, in this case, surrounded by layers of sour orange cells.

Perhaps the most familiar graft-chimeras, though, are the so called ‘family’ apple trees so popular when space is limited – multiple varieties of apple sapling are grafted onto the same rootstock.  Most apple varieties need to be near another tree with which to exchange pollen when they flower, and family trees neatly circumvent this problem.  The one in the photo below, supplied by Thompson and Morgan, has shoots of three well known varieties; ‘James Grieve’, ‘Cox’s Orange Pippin’ and ‘Golden Delicious’, grafted onto a single rootstock (called MM106) which helps keep the tree to a moderate size.