There was lots of rain overnight – very unusual for Ladakh, which has an average annual rainfall of around 50 mm.  It turned into a beautiful day though – the cloud over the highest mountains only served to highlight the rock features.

Today’s plan was to orientate people with respect to the Indus Suture Zone and the rocks on either side of it, so both our visits were to buildings perched above the river, with views of the rocks to the south.  On the way to our first stop, Thiksey monastery, we stopped at Choglamsar (see More monasteries) and Tashi  explained that the Dalai Llama is in Ladakh for his annual visit this month and will be teaching  at Thiksey tomorrow.

All the roads are decorated with prayer flags and the monastery and it’s entrance gate are resplendent in fresh paint.

The whole area is decorated with prayer flags, a vast canopy has been erected on open ground below the monastery and groundsheets are being spread in preparation for tomorrow’s event.  There is a real party atmosphere.   ‘Welcoming volunteer’ ladies in full traditional costume sport festival-style lanyards and passes!

Tashi explained a little about the symbolism of the five colours of prayer flags then we gave the group just over an hour to wander round by themselves.

John, Tashi and I did the same, and answered questions where we could.   Prayers were going on in one of the temples for an elderly monk who’d died and we were able to sit in on the ceremony for a little while.  The youngest monks looked as uninterested as most small boys in a long religious ceremony! 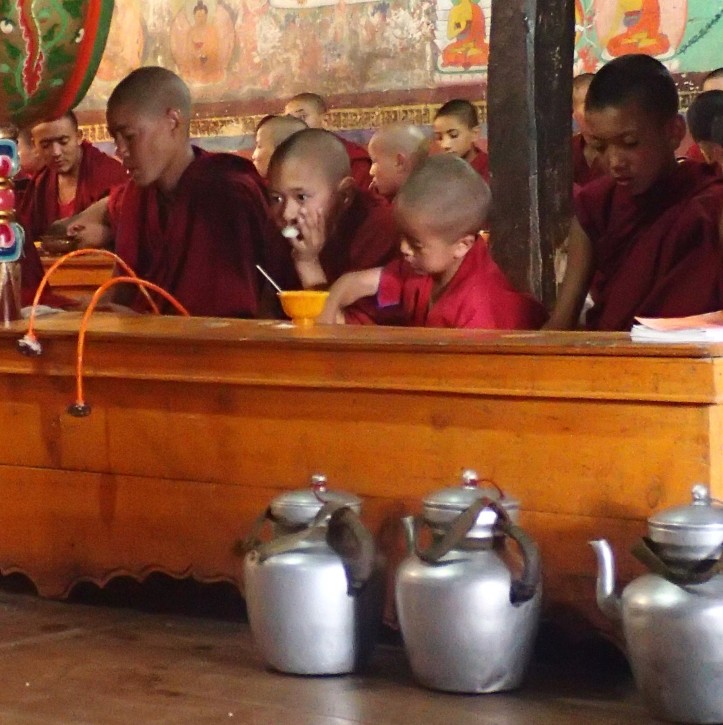 The whole monastery was much busier with tourists, both Indian and foreign, than it had been last year.  I’m not sure whether or not that was related to the Dali Llama’s visit. We’d planned to have a tea break in the car park but it was both too hot and too busy by this time so the drivers decided to take us to a picnic site on the banks of Indus.  However everywhere was flooded after last night’s rain and we had difficulty finding a suitable spot. 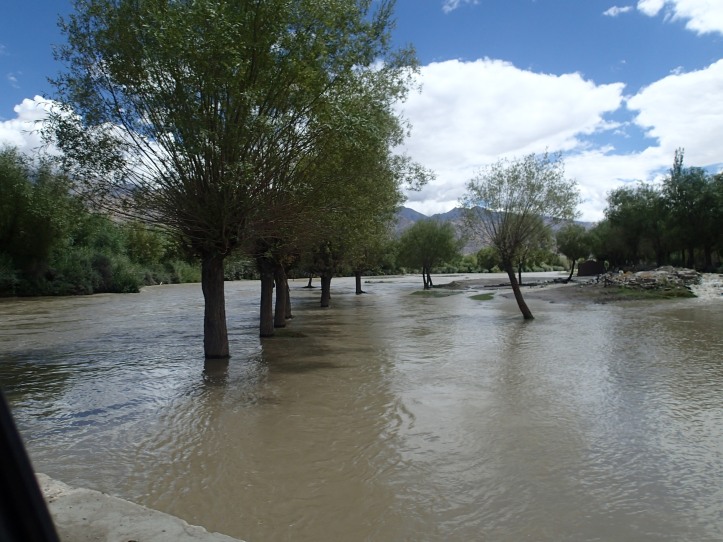 The search for the perfect picnic spot proves disastrous – the drivers insist on getting the vehicles as close as possible to where we will stop, despite the fact we clearly have legs. This involves taking the cars down a rough, steep slope on which one car gets grounded.  One driver, Aziz, then has his foot run over when helping to push the stuck car.   Fortunately we have ice and painkillers and persuade Tashi to take him straight to hospital for an X-ray.  We hear later that he hasn’t broken anything but they’ve put a plaster on his leg and he won’t be able to drive for at least a fortnight.  His brother is able to take over driving his car, fortunately.

We carry on to Shey palace without Tashi, taking the opportunity to point out the junction between the Ladakh batholith, on which both Shey and Thiksey are built, and the sediments of the Indus formation on the far side of the river. 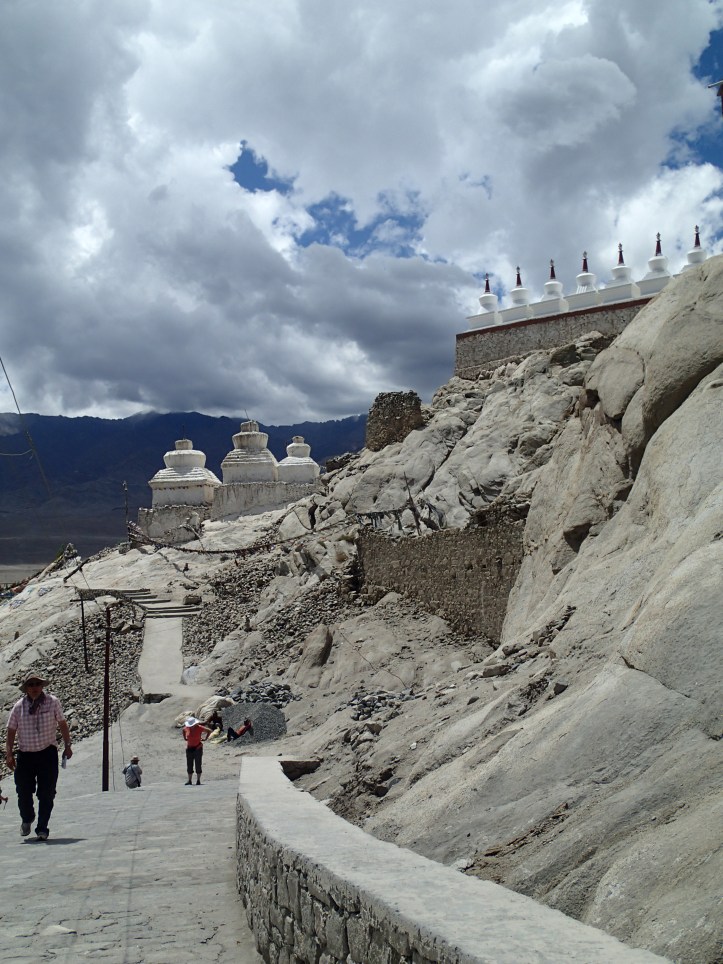 Climbing up to Shey palace

It’s a sign of the times that there is a new notice in the temple asking people to avoid taking selfies with the Buddha!

Most people were down from the palace in time for a little shopping in Tibetan refugee market by the road there – I indulged in some pretty amethyst beads.

We were back at the hotel for a late lunch – many of us were delighted (especially John) to find momo and noodles on the menu.  The afternoon was free for people to visit the town – I ended up replacing the torch I seem to have lost and John the shampoo he left in the last hotel, though we did also look at some beautiful pashminas.

…but I was glad to see the women selling lovely fresh fruit and vegetables on the pavement haven’t been moved on. 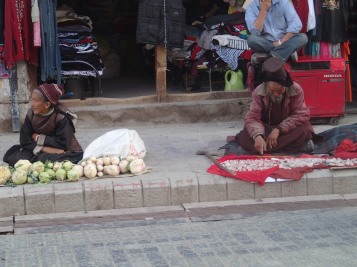 We wandered on to check on Dolly the sheep, a feature of last year’s walk into Leh from the Grand Himalaya hotel and were pleased to see her looking well and up to her old scavenging tricks. 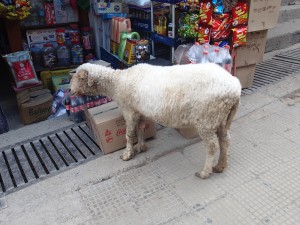