Last night we were told that we’d have to go there and back to Tso Moriri over the Taglang La pass due to a landslip having closed the Chumatang road, so this morning we were very pleased to hear the road was open again and we can go back to our planned circular route. Today we followed the Indus eastwards for around 150 km from Leh – new territory for John and I once we got past Karu.  The road to Thiksey was busy and there was even more of a party atmosphere today with people flooding into the main gate of the monastery, dressed in their Sunday best, as well as up the path at the back to see the Dalai Llama.

Beyond Karu we spotted a herd of at least ten Himalayan deer on the far bank of the river – they’d obviously been down for a drink.  We had to stop to show our wildlife permits and passports a number of times, the first at Upshi.  I liked the choices of tea available on the restaurant menu where we parked.

It was easy to see where the landslip had been.  Not long after Upshi the road goes very close to the Indus, which at the moment is a raging torrent carrying waters from much further East where there has heavy monsoon rain.  My attempts to photograph it were distinctly underwhelming but John managed to get a good video on his iPad. For much of our journey today we were close to the river, climbing gradually with it. Sometimes the river was deep and narrow but, where the rocks were softer, it had carved out and spread across huge flood plains, submerging trees and telegraph posts in its way. I much preferred being by the river to the high passes, but not everyone agreed.

We stopped for a quick comfort break and to look at the rock painted Buddha above the tributary at Likche.

We stopped again near the village of Hymia for a proper tea break.  This was a delightful shady spot at the roadside, with apricots ripe for scrumping and Xanthoria elegans  covering the north facing side of the valley.  A mantra had been cut into it, which would be very useful for any lichenologist wanting to work out how fast the lichen grows! 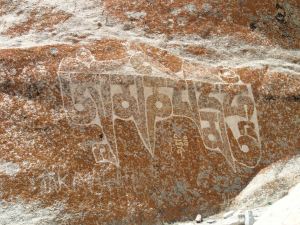 Nikhi tried on a traditional pannier which someone had left by the edge of the field, though I think she should really have one strap across her shoulders.

It was noticeable how small the ears of barley growing here were compared to the more highly bred varieties we would see at home.   Other fields contained peas and rape, also setting seed – people here are obviously pretty self- sufficient, which I imagine is essential here in winter. 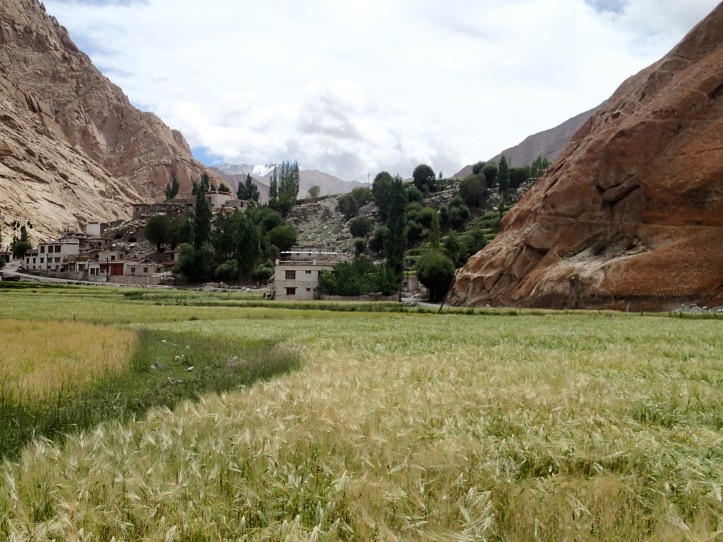 The road carried on along the Indus to Mahe, but we stopped first at Chumatang for a quick look at the hot springs.  The water was certainly hot – John has a paper on the potential for geothermal energy in the region which shows someone boiling eggs in it.  We didn’t try that!  Apparently the army in the region has an annual 50 kW energy requirement, mostly met using diesel generators, so it’s not difficult to see why geothermal energy would be appealing. 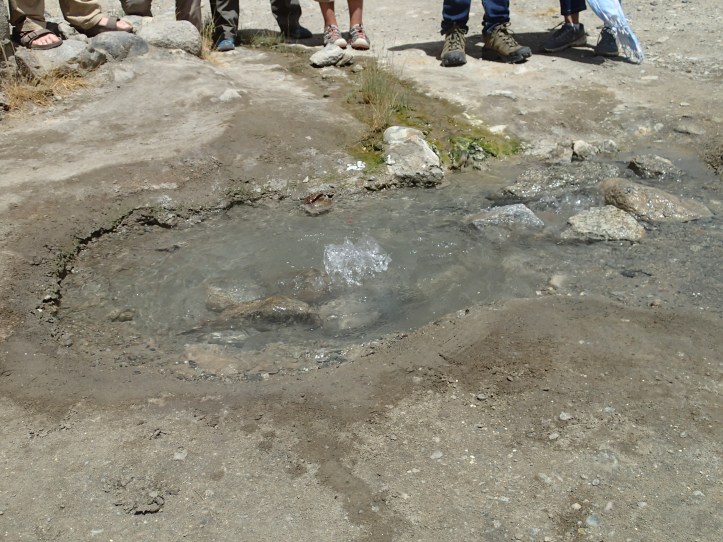 Otherwise, Chumtang has little to offer – basically an army truck stop – so we pressed on a little further and picnicked by the river.  This had everything – fantastic views of the ophiolitic  melange for the geologists…. 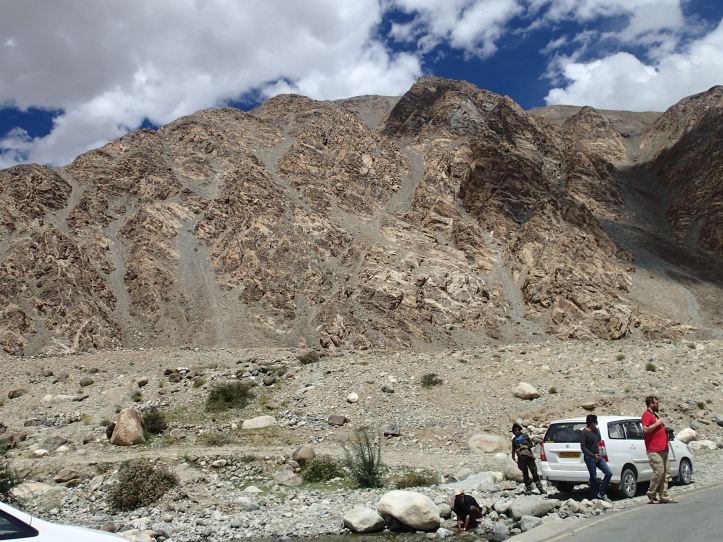 ..four or five species of Gentians and Gentianella for the ecologists (you decide)… 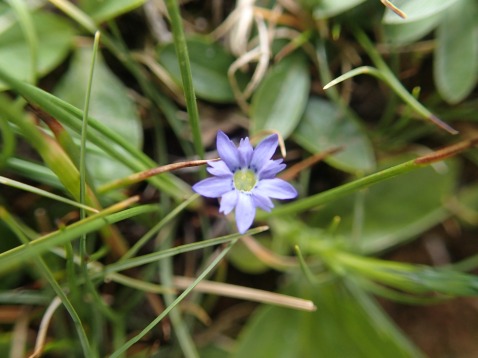 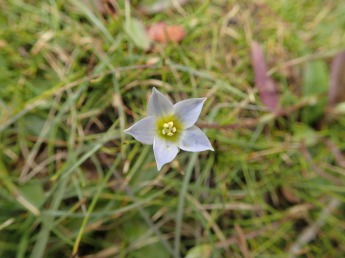 … and two men shaving each other in the nearby stream for local colour.

Not far beyond this we stopped at the final checkpoint before crossing the Indus and heading up a side valley to Sumdo.  We stopped to look at a large herd of the long-haired Pashmina goats owned by the nomadic Changpa people. 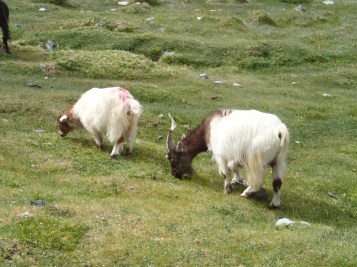 The ground here was studded with the tiny white gentians we’d seen earlier.  A little further up the road, a couple of marmots popped their heads out of a burrow.  The bigger one shot across the road and into another burrow on seeing us – apparently they tunnel right underneath the road. From here we pressed on to the highest point on the road, at just under 5000 m, before dropping down to the turquoise blue Kiagar Tso lake, with wonderful views of the snow-clad hills beyond.

Its easy to see from the terracing at the southern end that this is the remnant of a once much larger lake.  The plants on the sandy ground beside the lake are small and often red-tinged, to protect them from the intense solar radiation.  Some also have farinaceous deposits on their leaves. 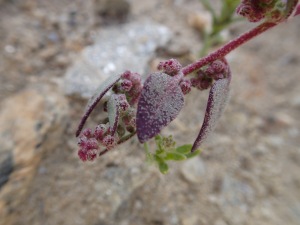 After a short stop, we drive onto Tso Moriri itself.  At first sight it is not so dramatic as Pangong Tso, but it is stunningly beautiful.  We see Bar-headed geese as we drive up the lake towards Karzok, where we are staying in the ‘Nomadic Life’ tented camp.  This proves to be much nicer than the one we stayed in at Pangong – the tents are clean and comfortable and dinner, when we have it later, is very good.

We are welcomed with tea then John and I headed off for a walk to plan tomorrow’s activities.  Tashi (guide) wants to take us to a local nomadic village but we want to make sure we also have time to do some geology and ecology.  We walk along the road for half a mile or so before making our way down to the lake.  Much of the lake shore is just recent scree but we do find one outcrop which looks promising for geology and there is no problem with finding a place to do plant diversity quadrats – there are lots of interesting plants.  The only lichens we see are growing on the soil surface rather than on rocks so it will be good to think about why this might be with the group.  We do see hoopoes at close quarters though – seems rather surprising at this altitude.

We get back just as the sun is going down over the lake, producing beautiful skies.

The catabatic wind blowing down from the glacier has really got up by this stage and its freezing (not quite literally).  I put what I intend to wear to bed (several layers) on under the clothes I am wearing so I don’t have to undress later.  We are summoned to dinner at 8 and afterwards explain our plans for tomorrow.  The sky is clear and the stars spectacular but there is still quite a lot of light pollution immediately around us as the camp is lit until 11 pm.  Dave and some of the others are keen to stay up late and look for Perseid meteors but John and I decide on a couple of rounds of Yahtzee and then a last look for shooting stars before giving up and heading for bed.  The wind has dropped by this stage but I’m still glad of my layers and the two quilts on the bed.