The Valley of Flowers at last, Sunday August 28

It’s 30  years this year since Martyn bought me Frank Smythe’s book, The Valley of Flowers, so it’s been a long wait to get here!  The sun is shining for us and we set off straight after breakfast as Vinod had warned us it’s a steep pull up to the valley and he was quite right- we are basically climbing up to a hanging valley, across the terminal moraine.  Its more or less the first U-shaped valley we’ve come across in an area where the landscape has been carved by fast-flowing rivers, prone to flooding. The ground here is no more stable than elsewhere in the region and a large landslip has added a  couple of km to the route in recent years.  The path climbs out of Ghangharia and crosses the Laxman Ganga, before dropping down to, and crossing, the Pushpawati river.  I get waylayed on the path before we even get to the National Park by the stunning variety of flowers, including beautiful bellflowers and a stunning red Potentilla. 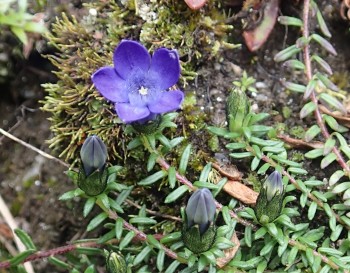 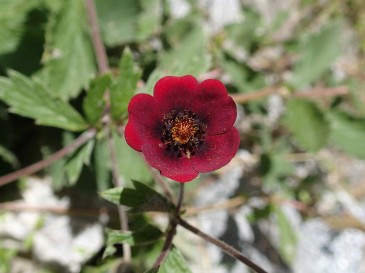 We purchase our permits to enter the park and Vinod explains that we are counted in and counted out – if we are not back at the entrance by 5 pm the park rangers will come up to look for us.  In theory there is night-time danger of Himalayan black and brown bears and even snow leopards but the real risk is being caught out in inclement weather.

Crossing the Pushpawati river (on a bridge!)

Once over the river we climb steeply through mixed woodland – fir, pines and the Himalayan birch we saw in Kashmir.  The woodland floor is covered in balsams of various sorts and Corydalis, as well as a range of yellow Senecio and Ligularia species. 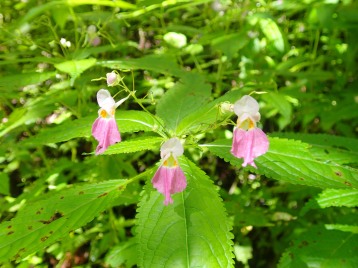 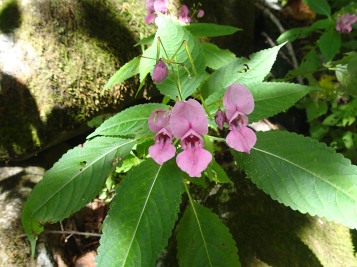 We catch a first glimpse of our destination through the trees but there is still some way to go as we have to climb above the landslide – the old path, no longer passable, looks a tempting alternative as it contours round the hillside. 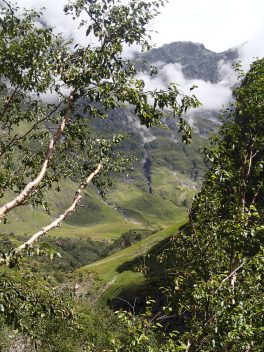 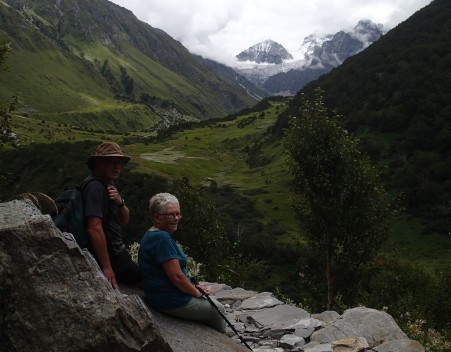 First glimpses of the Valley of Flowers

As we leave the woodland behind and climb onto more open ground there is more variety in the vegetation but when we reach the sign which marks the formal start of the valley, at Baman Dhaur, we are greeted by a sea of giant Himalayan balsam (Impatiens sulcata) and the white knotweed, Persicaria wallichii (formerly known as Polygonum wallichii), that we have seen elsewhere. 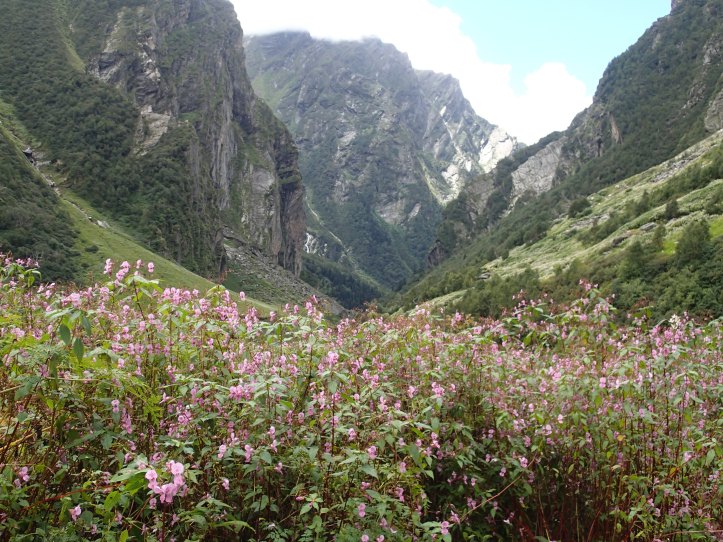 Impatiens sulcata in the Valley of Flowers 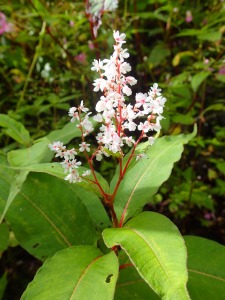 Vinod is worried that we will be disappointed but we soon realise that we just need to get away from the path onto areas where the vegetation is shorter to find more diversity.  There is plenty to see, from beautiful, dainty Swertia ciliata and Bupleurum longicaule to dramatic aconites. 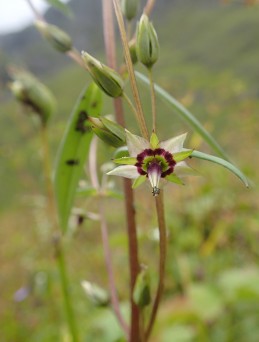 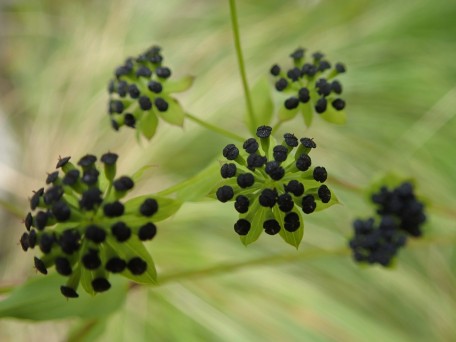 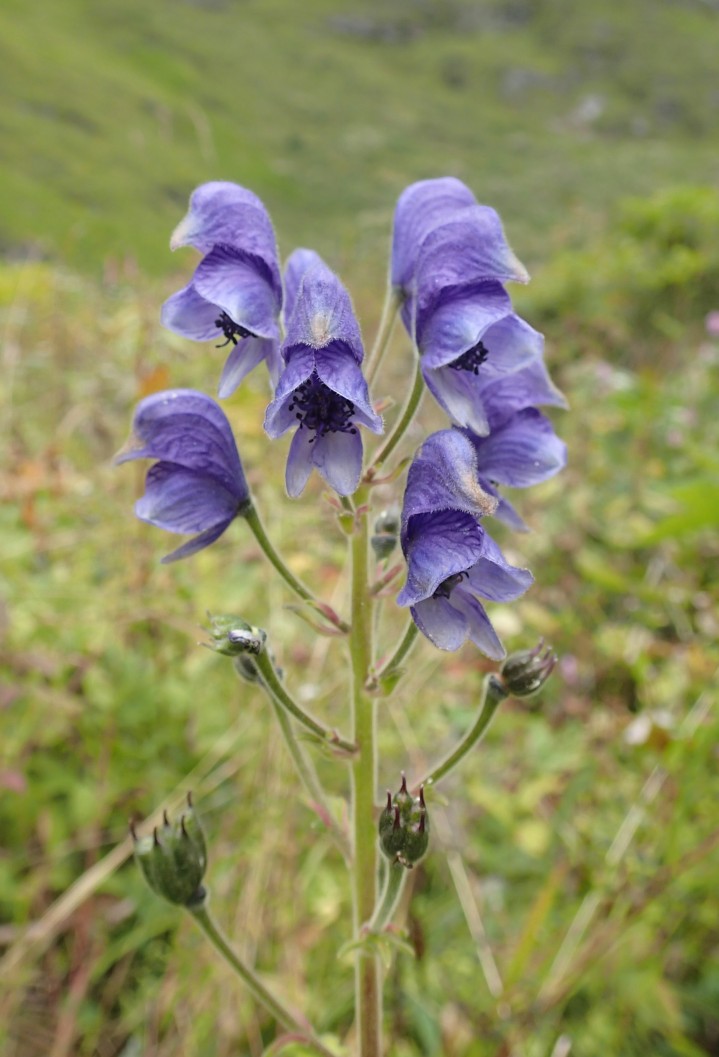 We found a spot to base ourselves for an early lunch then wandered off separately from there – Martyn wanted to expore further along the valley and I thought the banks of the streams which flow down to feed the Pushpawati might be fertile places to look for different flowers.  Helen was happy to explore closer to our picnic site. 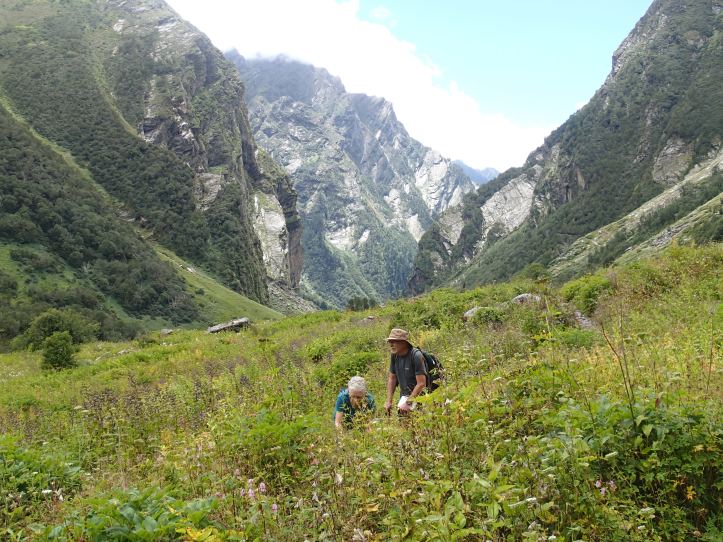 The valley is famed for its diversity – its heterogeneous landscape and the range of altitudes it covers offer a wide range of micro-habitats.    Late August is probably not the best time to visit as so many of the early flowers are finished but I reckon I found 80 plus species of flowering plant today, without much difficulty.

However Vinod’s concerns are valid – when Frank Smythe first came across the Bhyundar valley in 1931, shepherds from the village of Pulna were using the valley as summer grazing for their sheep and goats.  When the area was declared a national park in 1980 to conserve a representative area of high alpine meadows, all grazing was stopped.  The valley was then declared a World Heritage Site in 2005.  This was Vinod’s third visit to the valley since 2008 and he told us that there was much more Himalayan balsam and knotweed growing than on his previous visits – the names alone strike fear into the hearts of many UK conservationists.  Vinod’s observation is obviously just anecdotal, as he has not always visited at the same time of year, but a park ranger we spoke to confirmed his impression.  I’d be very interested to know how the flora of the valley is being monitored.  Chandra Kala recorded 520 species of vascular in the area in the period between 1993 and 2005 (Kala, 2005).

It’s not a simple story of villains and valued plants though. The knotweed proliferates on eroded slopes and disturbed ground, as many ‘weeds’ do (see Richard Mabey’s fascinating book, Weeds) and helps to stabilise the ground.  Where it has been cut back by the authorities, balsam has proliferated in its place.  Higher up on the gentle slopes of the valley sides, other plants stand more of a chance.  Whether to allow controlled grazing in the valley is very much a live issue – it is often used in the UK to help maintain diversity in nature reserves by supressing weedy species.  Kala, however, doesn’t think this is the biggest problem for the Valley of Flowers (Kala, 2002).

The walk down the from the valley was much quicker and easier than the climb up, though there were still plenty of new plants to see.  A pretty viola and a new bistort, amongst others. 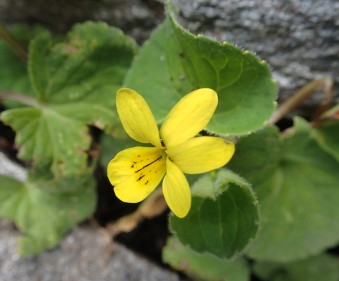 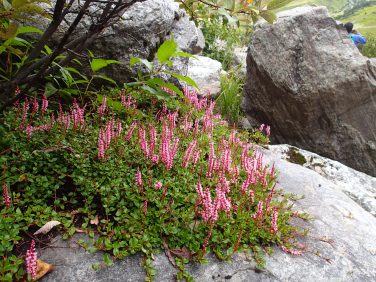 For those less excited by plants, it was lovely to spot a Mouse hare or pika (Ochotona roylei) hiding at the edge of the path – it was too shy to wait around for photos though.

Some people take an easier route up into the valley by being carried on the back of a porter – mostly it’s children but, on our way down, we come across a ‘very old man’ being carried down on the back of a wiry your porter.  His companion reveals that the ‘very old man’ is seventy years old – he seems a little surprised to find that two of our party are more or less the same age and managing fine under their own steam!

We are back at the park office well before 5 pm to be counted out and at the hotel long before dark.  The rooms are every bit as cold and damp as when we’d left them this morning and we get properly chilled down before dinner.

Helen, Martyn and I decide  to be adventurous in our eating and order the four Garwhali specialties on the  menu for dinner, without any idea what we are ordering!  You win some, you lose some – the dal known as ‘Chainsa’, made from ground and roasted black lentils, is delicious but the curd rice turned to be cold and less than ideal for three chilly campers!

Kala C.P. (2002) Paradise under Fire. Down to Earth, http://www.downtoearth.org.in/coverage/paradise-under-fire-14692