All around there are signs of spring – the larks are again serenading me on early morning runs, the first lettuce seedlings have appeared in my allotment and I’ve had my first go at hacking back some of the rampant shrubs and climbers around our garden.

I’ve had a couple of visits to the oak tree I am ‘following’ this year since January but the changes so far have mostly been apparent in the understorey rather than to the tree itself.  I have managed to ascertain that my tree is around 30 years old (it has a circumference of 74 cm) so is just a baby compared with the one we found on Hadrian’s wall last summer (see The great wall of Hadrian, Day 5) – it probably won’t produce acorns for another 10  years.

Oaks support more types of herbivorous insect than any other tree.  This, and their longevity, makes them a vital part of woodland ecosystems, as well as beautiful specimen trees.  Caterpillars feed on the young leaves and the leaf litter provides both food and shelter for many invertebrates and fungi. Badgers, deer, mice and squirrels feed on acorns and the canopy of mature trees is a great nesting site for birds.

Most of this is long in the future for my English oak (Quercus robur), at just around 3 m tall!

Just a week ago we had a series of hard frosts in the morning and everything under the tree glistened with ice crystals, despite the early morning sun.

The microclimate in the adjacent wood was clearly quite different – primroses were already blooming.

Today, though, it feels like spring has come.  A sudden green flush has appeared in the hedgerows as hawthorn and elder come into leaf and buds are bursting on the trees around my oak.

Oaks are amongst the last of our native trees to come into leaf but I didn’t want to miss anything exciting so visited again this morning.  With a bit of imagination, the leaf buds might be starting to elongate a little …

The biggest difference was in the understorey vegetation though – some of last week’s frosted dead nettle leaves now bear flowers; the first of many changes to come. 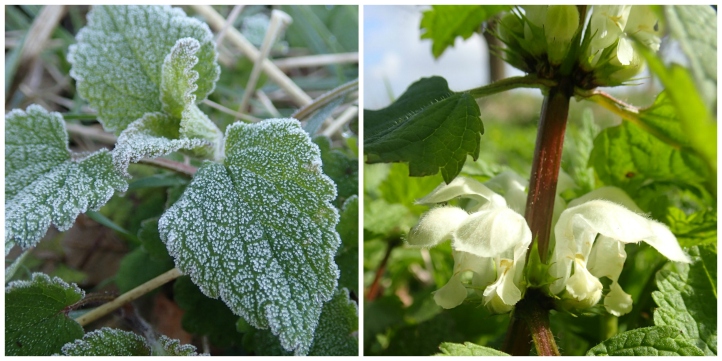