We have half a day in Bukhara today as we have to be at the station for our train back to Tashkent by 3 pm so decide to take a taxi out to the Bakhauddin Naqshbandi mausoleum this morning.  The taxi driver is very keen to be helpful and wait for us, but we don’t want the time restriction.  He doesn’t really believe we don’t understand Russian and at one point I think he is using ‘Google translate’ on his smartphone as we drive – it turns out he’s just finding an English speaking friend to talk to us. Fortunately he seems to be quite good at driving without his hands on the steering wheel…

The drive through the flat countryside north of Bukhara is interesting in its own right.  As usual, I’m botanising from a distance, but can’t decide whether I’m seeing rice or wheat in the fields.  We see a mechanical paddle-based irrigation system at work but also elderly men and women hoeing dust-dry land by hand in the hot sun. The sky is so blue it almost hurts the eyes today. 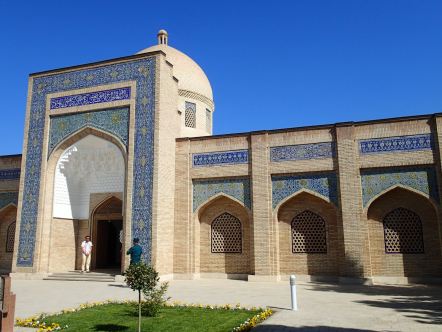 Bakhauddin Naqshbandi, who died here in 1389, founded the Naqshbandi order of Sufis and remains a very popular Bukhari saint.  Sufism, with its mystical brotherhood, was able to function underground to an extent whilst official Islam was brutally persecuted under the communist regime.  Stalin closed down Naqshbandi’s mausoleum and it was turned into a Museum of Atheism but some kind of folk memory of the site survived and Bukharis marched here in 1987 to protest against the last days of Soviet rule.  When Colin Thubron visited, just a few years later, the mausoleum and its attendant mosques were just beginning to be restored.

Today the mausoleum is lovely.  The central courtyard, which contains the saint’s tomb, has the same kind of elegant wooden columns and carved ceilings as we saw yesterday at Bolo Hauz mosque. A bunch of horse hair on a flag pole shows that not only Muslims venerate Naqshbandi.  Sufism seems to transcend many boundaries. 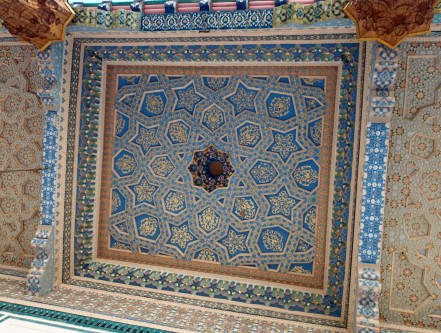 It’s peaceful when we arrive, with groups of women quietly saying their prayers by the shrine. 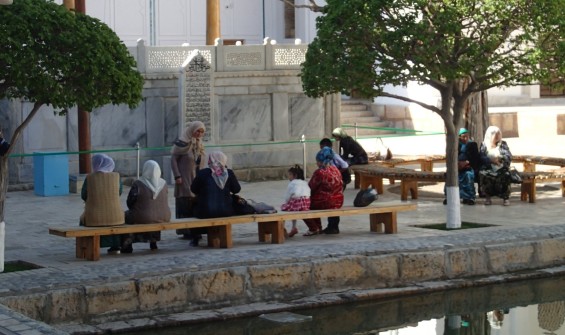 Soon there are lots of tourists, too, and it strikes us, again, how tolerant the pilgrims are of those who come just to sight see. One, German-speaking group is led by a mufti who we can only presume must once have been a Russian conscript in East Germany, his German is so fluent.

By the hauz at the back of the complex is a huge, fallen mulberry tree which you are supposed to crawl under, rather like the Qu’ran stand in Samarkand, if you want to conceive – it looks a tight squeeze!

As we amble around the compound, enjoying the ambience, we are hailed by a group of older folk who rush off to get the park photographer to photograph them with us. 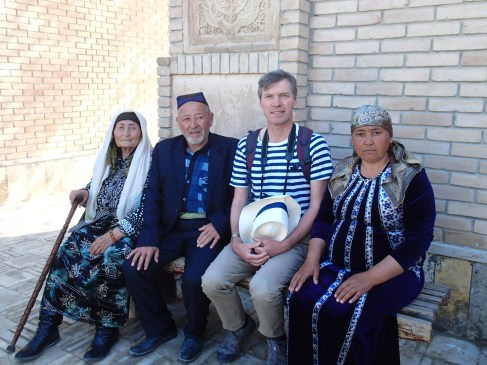 When we leave the mausoleum we plan to get a taxi back but, as there are none around, we jump on a minibus which the friendly driver assures us is heading for the Ark.  This is certainly true but equally certain is the fact that the route is far from direct and shows us parts of Bukhara we had no idea existed.  What had taken about 20 minutes by taxi takes us an hour by bus, on some very bumpy back roads, but it’s all part of the experience.  The bus driver refuses to take our payment, for some reason, maybe realising the journey hadn’t been quite what we were expecting!

Now that we are properly orientated it doesn’t take long to walk from the Ark to Poi Kalyon square where we hope to climb the minaret, as it’s a beautiful clear day.  The door on the minaret is firmly locked, though, so we have a good excuse to avoid the 45 m climb. 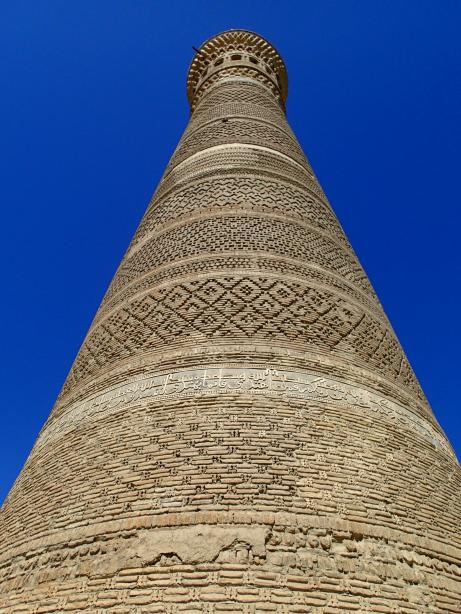 Instead, we head back to the hotel to check out of our room, then to Lyabi Hauz for lunch.  It’s lovely sitting in the shade by the reservoir, people watching, and Martyn is in need of more coffee.  We decide on a final walk around the back streets on our way back to the hotel – it’s like stepping back a hundred years just a block or two back from the main streets.

A final view of Bukhara, trading domes and Poi Kalyon

We have to get a taxi to the station at 2.30 but spend a final hour or so relaxing in the tea lounge with more green tea and snacks.  The train journey back to Tashkent lasts four and a half hours and this time we share the carriage with a loudly good-humoured group of middle aged Uzbek women who share their fruit and cakes with us.

The taxi driver who takes us back to the Gulnara hotel is not so pleasant, driving like a lunatic and doing his best to cheat us.  He’s notable as the first person we’ve had any bother with in a week though, so that says a lot about Uzbek hospitality.