There was more rain and a thunderstorm and a half during the night, which Martyn managed to sleep through!  This morning there are juicy raisins instead of apricots to go with breakfast – I think they taste better than what we get at home, perhaps because they have not been dried quite so much. Aliya phones to make sure all is well for collecting us and to find out our plans for the morning but we decide that a short walk is all we need, so head off down the road towards the river.  Going down is easy, but we’re not sorry when Jasur drives past and picks us up part way up the hill.

There is a sense of spring cleaning going on everywhere – Jasur’s eldest daughter and her friend (or cousin?) are busy washing down and assembling a series of plastic tables and chairs from the outhouse which makes me wonder if they run a tea house on the route up to the shrine in the tourist season.  As we walk down the hill, others are doing the same – there are several complexes of what look like hotels plus chalets with a bit of a Soviet era appearance being spruced up.

When we get down to the river we come across a bridge across, rather closer than the one Jasur took us to yesterday but I, for one, am very glad we didn’t have to cross it. 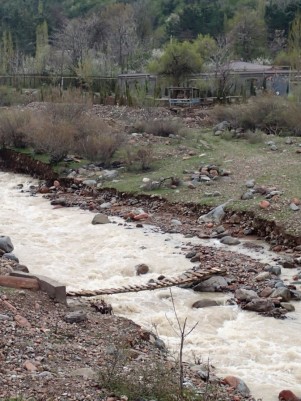 The trees along the river, mainly willow and poplar, are just starting to come into leaf and are that lovely, fresh spring green we left at home.

It’s noticeable though that the Cercis which was in bloom in Tashkent at the beginning of our trip is not quite flowering yet here – we are only 1400 m higher but it’s obviously enough to make a difference.

We sit, reading, in the swinging chair and enjoy the peace until Bactria comes to drive us back to the hustle and bustle of Tashkent and the airport. 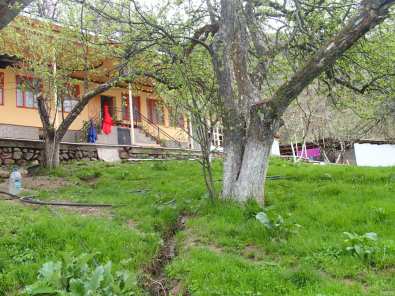 We are there ridiculously early – about an hour before checkout even opens – but much less stressful than risking being late, especially as the security process seems rather drawn out.  All our careful hoarding of registration slips from where we’ve stayed and calculation of how many dollars we are taking out (most of what we brought in!) are not needed, in the end.

So, how would I sum up Uzbekistan in just a few words? Fascinating, beautiful, full of history, friendly, tolerant – what’s not to like as a travel destination?  We were sorry to miss the western and southern-most parts of the country but it would have been too much of a rush in ten days – it leaves plenty of incentive for a return trip. All I have to do is work out how I can travel two or three weeks later for the spring flowers when that will almost always be in Durham’s term time!