An unlikely botanical paradise for Day 30 of #30 Days Wild

One of the best things about living where we do is that we can choose from three national parks within an hour’s drive of home but the final day of #30 Days Wild gave me an opportunity for botanising in a much less likely sounding spot – old industrial land around Teesmouth.  Our first stop, in Redcar, was for a bit of botanical twitching.  Sue had been told wild clary was growing there and we found it, despite the land having been recently mowed within an inch of its life.

But this is nothing compared to the diversity we see when we reach the land around the mothballed steel works on South Gare, the breakwater and reclaimed land on the south side of the Tees’ estuary.  It’s a most unlikely looking biodiversity hotspot but South Gare and the adjacent Coatham Sands was notified as a Site of Special Scientific Interest in 1971, the citation specifically mentioning the diversity of habitats present; “extensive tracts of intertidal mud and sand, sand dunes, saltmarsh and freshwater marsh which have all developed since the construction of the South Gare breakwater with tipped slag during the 1860’s.”

When we visited in July last year, the site was a mass of harebells and hawkweed.

On Friday, there were pyramidal orchids everywhere.

We weren’t as lucky with the weather as last year but the droplets of mist on flowers and leaves made for some equally lovely photos.

The orchids may be the star of the show but there is plenty more to see.  Both English and biting stonecrop find homes on the lime-rich slag and alongside the road.

There are a wide range of Asteraceae (daisy family) apart from the fleabane – hawkweeds, Mouse-ear-hawkweeds, Perennial Sow-thistle, and elegant Goat’s beard, also known as ‘Jack-go-to-bed-at-noon’, because its flowers close early in the day.

There are thistles too, from the same family – yellow Carline thistles and deep purple Nodding thistles. 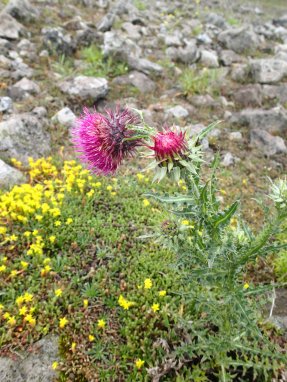 The site has some more uncommon plants too – we found Purple milk-vetch lurking in the longer grass on the edge of the dunes and shocking pink Maiden pink in the shorter grass.  Maiden pink has IUCN ‘Vunerable’ status in England and is seen as ‘Near threatened’ in other parts of the UK.

New to both of us was Shrubby sea blite – so new, in fact, that we had no idea where to start with identifying it.

Of course, once we’d worked out it was Suaeda, this made perfect sense – the last time I saw a plant in this genus was beside a high altitude salt lake in the Himalayas (see Tso Moriri to Leh).  The fleshy leaves had me confused there too, assuming initially it must be in the stonecrop family (Crassulaceae). In fact, Suaeda is a related to the samphire we sometimes buy to eat with fish.  It has small, fleshy leaves to help it cope with the shortage of fresh water in seaside environments, just as cacti do in a more typical ‘desert’.

According to the BSBI distribution map, Shrubby sea-blite is fairly common along the south and east coasts of the UK but there are very few records north of The Wash, so it’s perhaps not surprising we didn’t recognise it.

Another surprise was Wood sage especially as, according to Francis Rose, though it is found in dunes and grassland as well as in woodland it does not occur on very calcareous soils. 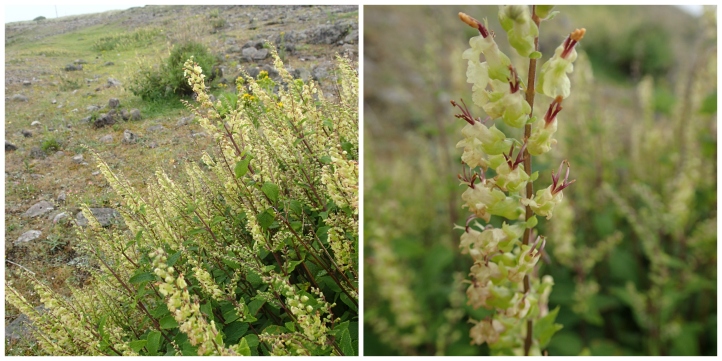 We spent a very happy couple of hours wandering the site – this is just a taste of the many other plants we found. 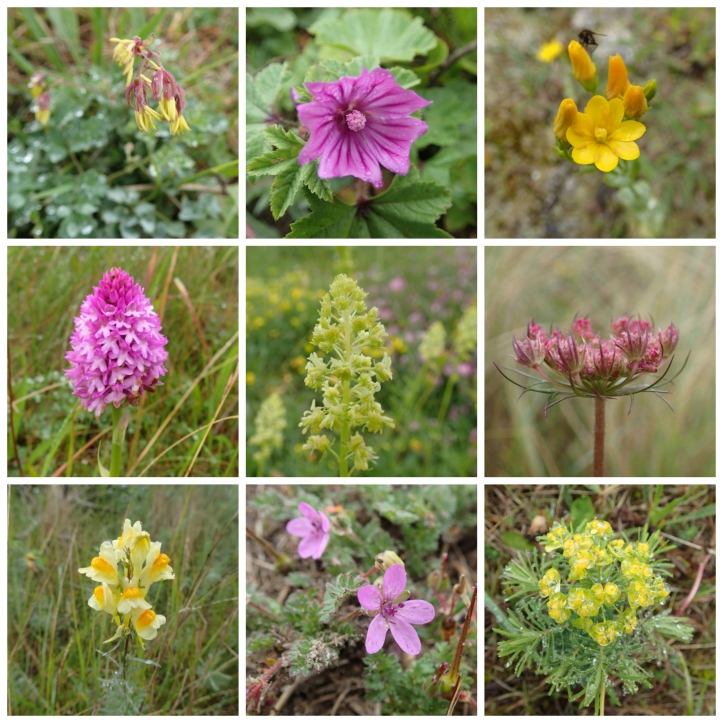 The diversity in plant life leads, not surprisingly, to diversity in invertebrates.  We found Cinnabar moth and other, less spectacular, caterpillars but the highlight was watching a Six-spot burnet moth emerge slowly from its pupa.

So how has all this diversity arisen in such an unlikely setting? South Gare breakwater was built using slag from local blast furnaces in the 1860s, to provide a safe harbour in stormy east winds for cargo boats entering the Rover Tees. This boosted the development of heavy industry in the area during the late 19th and 20th Centuries.  ICI had a giant petrochemical plant at nearby Wilton and both this, and the Teesside steelworks founded in 1917, benefitted from the good maritime transport links at Teesport.  Redcar blast furnace was the second largest in Europe and, in its time, the works provided the steel for iconic structures such as the Sydney Harbour Bridge and the Tyne Bridge.  Cheap, imported steel meant this market gradually disappeared and, despite a series of buy-outs and temporary reprieves, the blast furnace and coke ovens were finally shut down in 2015.

What does the future hold for this iconic site, where nature thrives despite humans’ best endeavours? Wind turbines off the coast at Redcar are a sign of changing priorities for the region.

I’m using a bit of artistic licence to make a point as the photo below was taken looking south from the north side of the Tees estuary but, to me, it seems the best way of summing up the possibility of wildlife and industry co-existing!