So much for one long distance walk per year!  We were well into May 2018 before we had the opportunity to walk our next stretch of the Weardale Way, from Eastgate to Frosterley.

This time there was no doubt we were following the Wear down its valley.  The first stretch is an easy walk along the river to Stanhope, with Bird Cherry blossom and spring flowers to enjoy on the river banks; primroses, bluebells, red campion and crosswort, plus plenty of cow parsley. 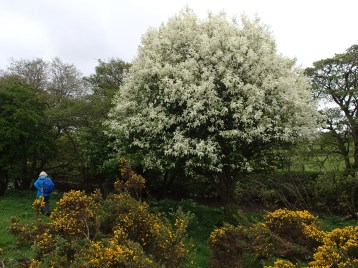 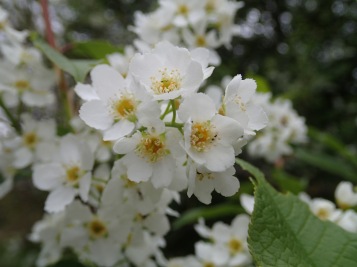 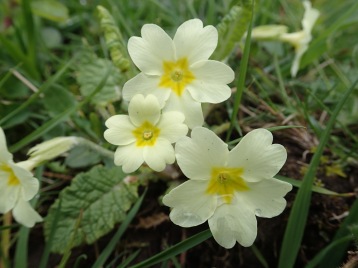 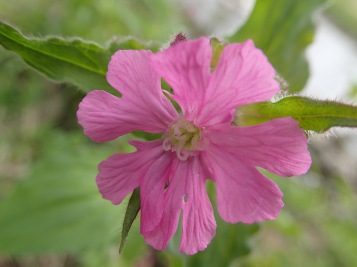 Much as it seems the rural idyll now, there is plenty of evidence of the area’s industrial past as we approach Stanhope, past an old quarry pond where rock from the so called ‘Great Limestone’ was extracted manually in the late 19th and early 20th Centuries.  The tough limestone was used locally for road building, as well as being sent by sent by rail to Consett to be used as a flux to remove impurities during steel production at the furnaces there. The limestone quarrying was itself a successor to the lead mining industry which was once a major source of employment in Weardale.

Just before Stanhope we came across the first of several old stone houses with dovecotes on today’s walk. This one was particularly appealing, with a swag of clematis just coming into bloom.  The pigeons housed in these dovecotes were originally kept for food rather than for showing or racing – the occasional pigeon pie would have been a welcome addition to a rather restricted diet! 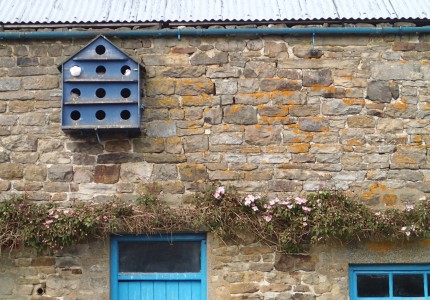 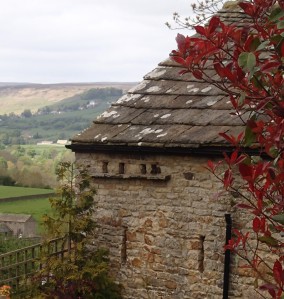 At Stanhope we diverted into town for coffee – too good an opportunity to miss – before heading back and across the stepping stones at the ford, through yet another caravan park and onto an old track leading up onto the fell south of Stanhope. 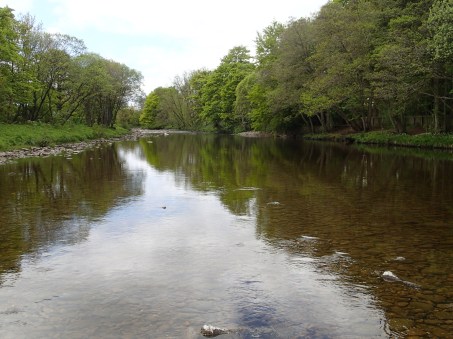 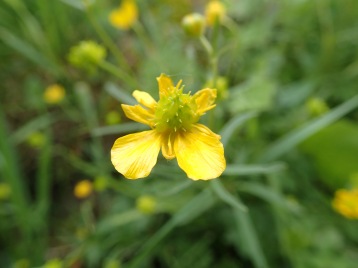 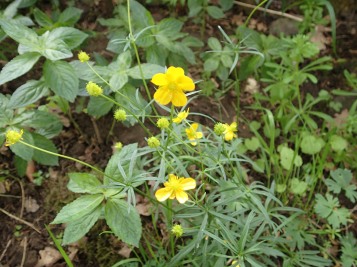 Goldilocks buttercup, Ranunculus auricomus, with its rather tatty looking flowers

I liked the look of the derelict house near Parson Byers – definitely a property with potential, in estate agent speak!  I think I might have problems convincing the rest of my family of its merits, though, despite the stunning views. 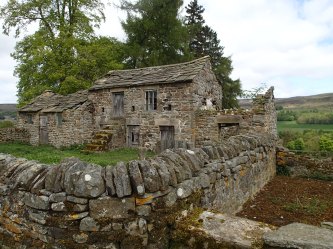 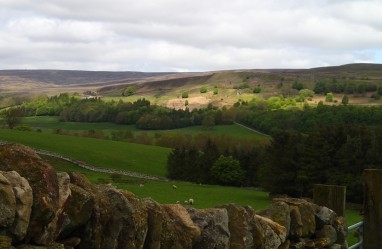 We ate our lunch by Dry Burn, which still had plenty of water but whose name gives a good clue to the underlying geology.  I picked up a particularly fine piece of ‘Frosterley Marble’ in the stream bed, which I must try to get cut and polished. It is not true, metamorphic marble at all, but a dark limestone; the name marble actually just comes from the Greek for ‘shining stone’. The Dibunophyllum bipartitum fossil corals embedded in my specimen are more than 10 cm long.  It’s a tangible reminder that, 325 million years ago, this part of Northern England sat near the equator, beneath shallow tropical seas. 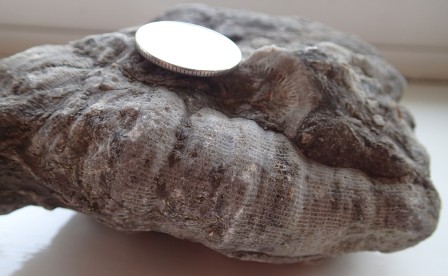 Frosterley marble has been quarried in Weardale and used as an ornamental stone for hundreds of years – once polished, it is beautiful.  Many local churches have fonts made of it and Durham Cathedral sports fine columns of Frosterley marble at the entrance to the Chapel of Nine Altars.  When I started Googling I was intrigued to find it has also been used in cathedrals as far afield as Norwich, Bristol and Bombay!

From Dry Burn we climbed the fell towards Hill End, enjoying beautiful views back up the valley and managing, somehow, to miss the official path. We toyed with the idea of following the Bollihope road straight down to Frosterley but were very glad, in the end, that we’d decided to stick to the path.  A short stretch on the Bollihope road took us to the track down to Bollihope Burn at Bishopley and we followed the burn down to where it joins the Wear near Harehope Quarry, where I’d left my bike.  The walk along Bollihope burn in the afternoon sun was beautiful, through woodland with banks studded with bluebells and primroses. 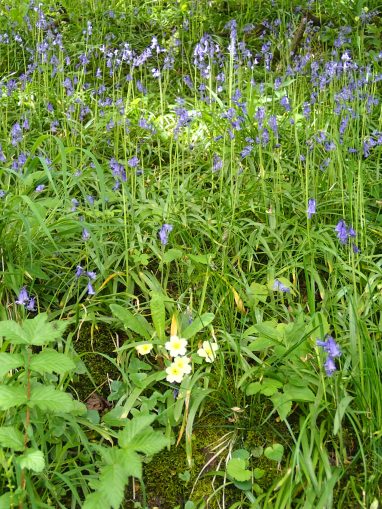 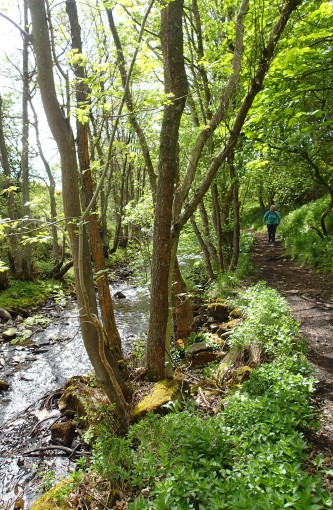 Wood cranesbill flowers appeared in the more open areas around the many old quarry workings. 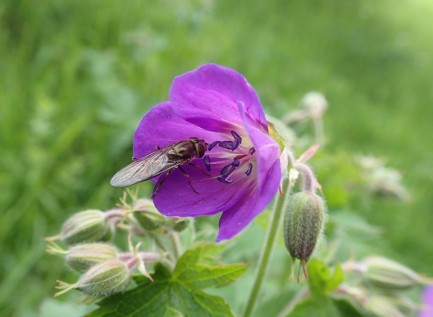 Once at White Kirkley we recognised the path from past fossil-hunting expeditions, though this time we resisted the urge to look for the swallow hole where much of the burn disappears or to marvel at the Frosterley marble in the stream bed below Wise Eel bridge.  We passed the remains of Bishopley lime kilns and the older buildings of Harehope Gill lead mines, before climbing up to the ‘Giant’s Boots’ bench which overlooks the remains of Harehope quarry.  I was probably more impressed than I should have been by the solar power operated gates on the track leading to West Biggins farm. 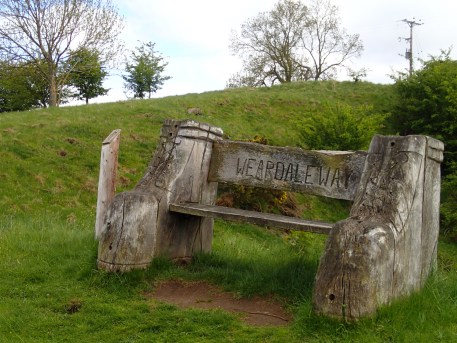 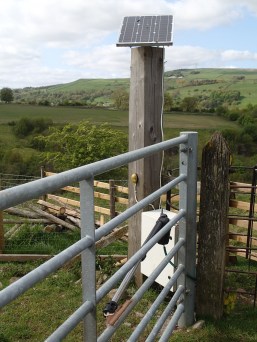 From here it was an easy descent round the quarry to the lane by the Weardale railway where I’d left my bike.  As always, what had seemed like a fairly flat road to Eastgate in the car turned out to be more uphill than anticipated on the bike!