The mild weather has stretched the flowering season well into autumn this year and as recently as last week, when I walked my Crowtrees loop for the 10th time this year, I found more than 40 species in flower; many species seem to be producing a second flush of flowers. Another pleasure this month was the fungi – both Inkcaps in the hedgerows as I walked up the hill and tiny orange Waxcaps on the thin soil on the spoil heaps at the top of the reserve.  The chattering of a flock of Long-tailed tits provided a welcome soundtrack.

There is new vegetative growth beneath the hedgerows too, though I know that won’t survive the current, much colder weather.

There are still plenty of the pea family in flower – a little melilot and vetch as well as plenty of Red and White clover, though the Red clover flower heads are a little faded now.

It’s good to see gorse, finally, starting to come back into flower – kissing must be back in fashion!

There is still a little Bird’s-foot trefoil in flower too but most plants are showing their bird feet seed pods.

Herb Robert is the only representative of the geranium family still flowering and Hogweed and Burnet-saxifrage the only carrot family members.  The first two species have been an almost constant presence during the year.  The mild autumn weather has brought another flush of Self-heal and Common field speedwell flowers to brighten grassy areas too. 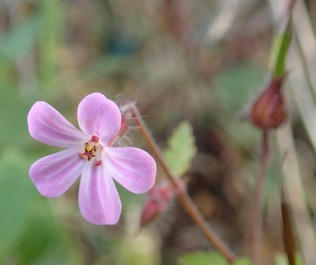 The largest group still in flower are undoubtedly the daisy family.  The scabious and Sneezewort flowers look well past their best but common daisies seem to have a new lease of life, with bigger, brighter flowerheads than earlier in the year.  There are a few Oxeye daisies too and Scentless mayweed is making something of a last stand in the field beside the new housing development. 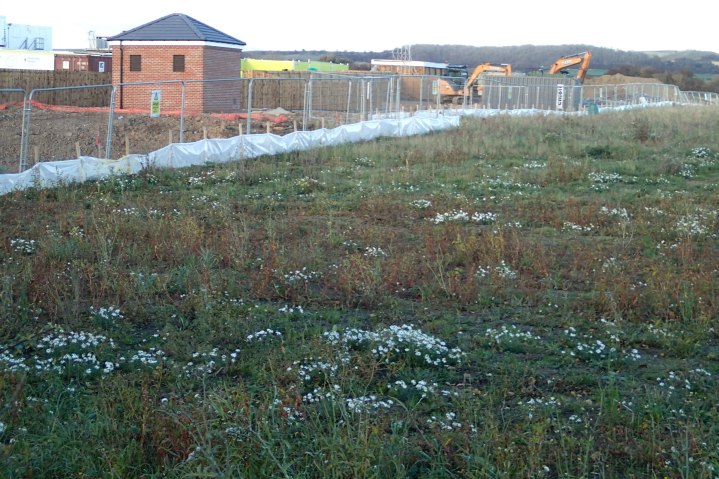 Most of the knapweed is in seed now but a few flowerheads still canvas for pollinators.

All the sow thistles I’ve seen previously are still in flower, though shadows of their earlier glory.

What else is new?  Well things seem to have gone very quiet in the new part of the quarry – no sign of any machinery on the move and the constant noise has ceased.  The escarpment now looks like someone has taken a giant bite out of it but the scar will soften, in time.

Many of the leaves have gone from the trees now after several periods of stormy weather but the bramble leaves are turning glorious shades of red as anthocyanin pigments are produced in leaves about to be shed. 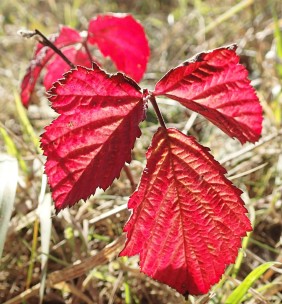 I notice that the new hedge has been cut this year rather than laid in the traditional but labour-intensive manner but it seems to be developing well, with dense growth right to the base which will provide an excellent habitat for invertebrates, birds and small mammals.

Soon the Exmoor ponies which have spent the summer in fields just above Coxhoe will go back into the reserve to help control the grass and more vigorous species and give some of the smaller plants room to compete.

With the first really cold weather of the winter this weekend, how many of these species will still be flowering in November?