The special flora of the Tróödhos mountains

The Tróödhos mountains sit in the centre of Cyprus – a 2000 m high central mass of mantle rocks, surrounded by pillow lavas, then an outer layer of younger sediments.  These rocks are known as ophiolites – ancient igneous rocks from the oceanic crust which have been uplifted as a result of the African plate subducting beneath the Eurasian one.  The central part of the massif is one of the few places on the world where you can be walking on 90 million year old rocks, 2000 m above sea level! The whole sequence is of sufficient interest geologically for the area to have been awarded the status of a UNESCO Global Geopark and a range of ‘Geosites’ of particular interest have been identified, which exemplify the processes which led to the building of the Tróödhos massif. We visited many of these in our trip, to build up a picture of what has happened here over the last 90 million years. 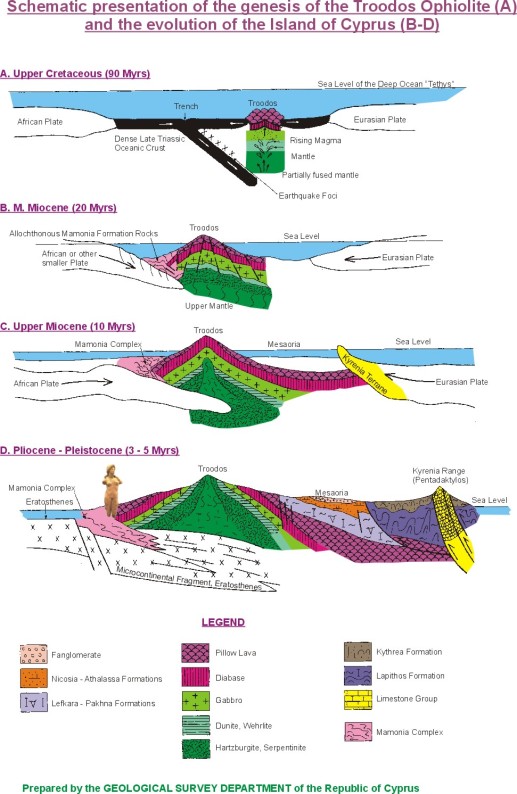 Cyprus’s botanical interest is three-fold: it is an island, so species have had time to evolve and specialise without too many outside influences; the range of rock types creates soils of many different types, each of which has its own, characteristic, flora; and some of these rocks create soils which are challenging for plants, to say the least, and so can only support specialised plants which have adapted to cope with high levels of heavy metals, for example.

I’ve written before about the number of endemic plants on Cyprus and a good number of these are found on and around the Tróödhos mountains, because of the ultra-mafic mantle rocks which form the centre of the range.   To have a look at some of these rocks and the plants they support we decided, like last year, to walk part of the Atalante trail on the slopes of Mount Olympus.   What a difference a year makes, though.  This time last year was hot and dry; the warnings of the risk of forest fires seemed real enough. This year, there were other difficulties… 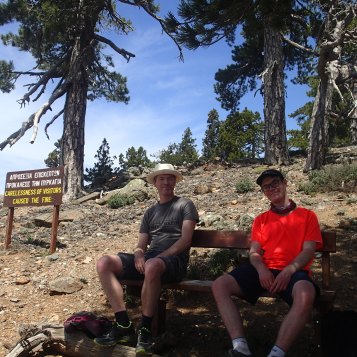 The snow posed some challenges, from a botanical point of view!  We saw plenty of the heavy metal tolerant Tróödhos endemics, Ranunculus cadmicus ssp. cyprius and Arabis purpurea but these were sometimes pushing their way through the snow. The difference in microclimate between north and south facing slopes of the mountain was all too evident.

The yellow Alyssum troodi which we found everywhere last year was not in flower yet, not the Corydalis rutifolia, but there were compensations – a group of beautiful Crocus cyprius (classed as Vulnerable in the IUCN Red list) and tiny Noccaea cypria, also endemics.  I wonder whether the Noccaea is a heavy metal accumulator, like its County Durham cousin?

We found rosettes of another Vulnerable endemic, Sedum microstachyum, wedged into the most improbable places and plenty of the variably-coloured Euphorbia veneris. These plants, with their tough, succulent leaves, demonstrate one of the other adaptations needed by plants growing on the very limited soil here. Arabis purpurea also has leaves densely covered with hairs to help protect it from water loss.   If the soil can’t retain water, then plants need to do this themselves, at least when not under the snow!

It’s no coincidence given the unique mantle rocks, Hartzburgite and Serpentenite, exposed along the Atalante trail that so many of the plants we found are Cypriot endemics and many are only found in the Tróödhos mountains. Many of the trees are draped in lichens and I suspect some of those are also unusual but identifying them would be a whole field trip in itself!

We walked as far as the disused Hadjipavlou Chromite mine and picked up a few scraps of ore from the spoil heaps before heading back – the snow was too deep here to see much.  The water being discharged from the entrance looked interesting enough, though, to collect some slime for Martyn – more on this from him. 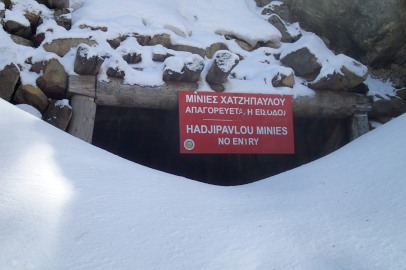