The Camino de Santiago in France – advice for the intrepid

Fancy something a little different to the last part of the Camino de Santiago in Spain? We’ve just finished walking a 186 mile stage of the ‘Chemin de Paris’ or ‘Via Tourensis’, one of the less well known routes which the Camino takes through France before its more common starting point at Roncevaux, on the Spanish border.
We walked from Orleans to Poitiers and found many differences between this and the similar length section of the Camino in Spain which we walked from Astorga to Santiago six years ago. Some of these seem worth sharing with anyone planning a similar walk. 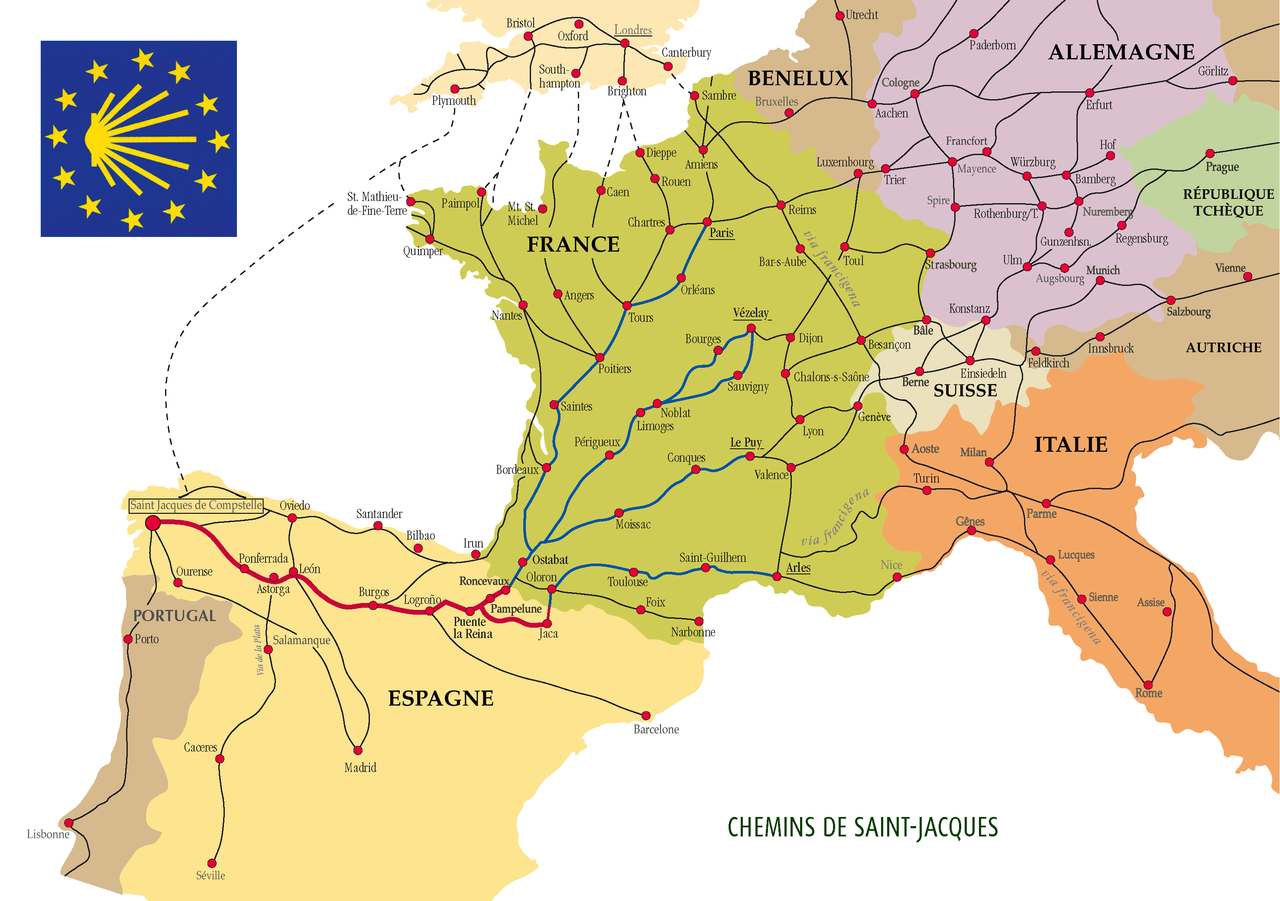 The single biggest difference, perhaps, is that the French section is cobbled together from a network of existing footpaths and roads, which means you often feel as if you’re not walking in anything approaching a straight line towards your goal – frustrating on a hot day, when distances are already quite long. Sometimes this is because the route, based on the long distance GR655, takes large loops to keep you off the roads, and you can choose to ignore these diversions. But at other times there is simply no road or path going in the right direction. For me, walking the Camino is all about the process of moving through the landscape at a human pace and carrying what I need with me, so the precise route followed doesn’t really matter. I know, though, that others see it differently. Here are some of our thoughts.

Maps – the France SCAN IGN maps available as a smartphone app are excellent and allow you to zoom in and out to look at sections of the path in great detail and avoid some of the loops mentioned above. Both GR655 and the familiar Camino clam symbols are marked on the map.

Distances between places – there is no ‘Camino Guide‘ in print to most of the routes through France and the true distances between places are hard to estimate accurately based on the online maps. As I’ve said, there are often sensible, shorter alternatives to the route indicated, which it pays to look out for. Distances quoted by some tour group operators are significantly shorter than the distances you’ll find yourself walking based on maps alone, as we found to our cost. Aiming for distances of 15 miles a day, we ended up walking an average of 17 miles, with a couple of 20+ miles days. Those extra two miles might not sound much but, day in day out, they add to the wear and tear on tired feet!

Terrain – though this is gently undulating rather than mountainous, don’t be tempted to leave the boots behind and wear trainers. The geology of the area is mostly limestone or chalk and flint which means the paths end up covered in sharp lumps of flint when the chalk erodes away. Even with thick soles we ended up getting new blisters nearly every day of our 11 days walking. Too late, I read that heat is one of the main causes of blisters forming and that taking boots and socks off at intervals throughout the day to allow your feet to cool down can help – something to try next time.

Accommodation – there are no ‘pilgrim hostels’ in much of France. Airbnb works as an inexpensive alternative in many places – you can get double/twin rooms for between €30 and €40 per night (2019). Some will let you use their washing machine for a little extra. The advantages over hostels are privacy, comfort and the lack of need to carry a sleeping bag or towel. The disadvantages are that most have a three or five day cancellation policy once you’ve booked so you have much less flexibility to take a rest day if the blisters are getting you down.

On the route we took between Orleans and Poitiers, we can particularly recommend:

Cabane dans ses arbres, Val de Cotineau, hosted by Bocquier. Snug treehouse 20 ft in the air in a valley of troglodyte houses. Long way from anywhere but basic cooking facilities and compost toilet and access to ‘proper’ bathroom in the house. Just lovely!

Maison au coer du village, Dange-St-Romain, hosted by Brigitte. Lovely room and bathroom in beautiful house in the centre of the village with amazing collection of comic books! Good pizzeria nearby. 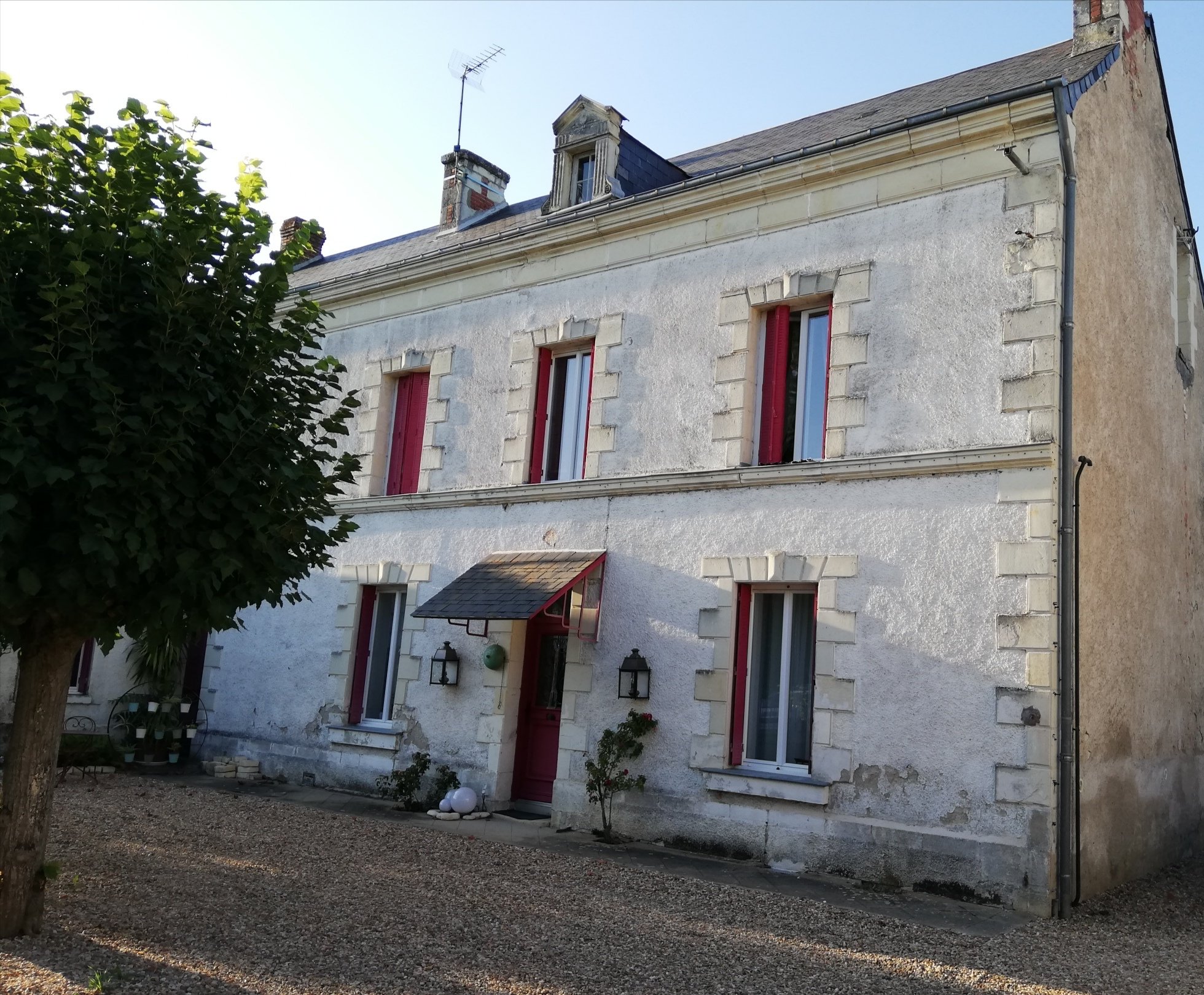 Eating – you often walk all day without passing through a village of any size and many small villages have nowhere to eat or buy food, especially between midday and 3pm. Take a stache of your cereal bar of choice for emergencies! Boulangeries open early (usually 6.30 am) to supply breakfast and we found it worth buying a baguette at the same time and carrying an ’emergency’ tin of fish to eat with it at lunchtime. You might find yourself needing to walk again in the evening to find a meal so it’s worth choosing accommodation with that in mind.

In terms of budget, €30 will buy you coffee and pastries for breakfast, a sandwich at lunchtime and a basic two course evening meal – a little more if you want wine or beer and a dessert. Nearly all restaurants will bring you a carafe of tap water without being asked – attempts to sell bottled water seem to be a thing of the past. If you’re looking for vegetarian food your options will be (very) limited – expect lots of goats cheese. It’s easier if you will eat fish occasionally. In cities such as Tours and Poitiers you can expect much more choice and the cuisine of places such as Morocco and Ethiopia gives plenty of veggie options.

Infrastructure – there is little pilgrim infrastructure, though signage is relatively good. Don’t expect to find lots of places where you can get your pilgrim passport stamped. A little late in the day we discovered that the Mayor’s office (the Maire) sometimes had a stamp.

Cameraderie – you won’t be part of a crowd! Depending on the time of year, there will only be a handful of people walking through France at any given time and you’re quite likely not to meet any of them. It’s possible to walk a 20 mile day and see no-one else on the path, so you need to enjoy your own company or choose a travel companion with care.

Having said all of this, we both really enjoyed our journey on the road less travelled and have already worked out that a similar length of walk south from Poitiers would take us to Bordeaux….