It hasn’t been raining all night but is raining again when we wake, though not for too long, fortunately. For once, we find breakfast a bit bland – something remarkably like pot noodles and rice cooked like kedgeree, but without the eggs and fish!

We are ready and waiting when Tahir and Tashi arrive at 9.30 am to take us to the airport. Driving along Dal Lake again we see women in graceful shikaras bringing their cargoes of waterlily leaves to the shore – fodder for their animals, Tahir says. We also get our first close up view of the type of houseboats we were supposed to be staying in – many look fine on the outside but there is no way of knowing what damage they sustained inside. We can see from the mud on tree trunks and leaves just how scarily high the water rose. As we drive through the old part of Srinagar en route to the airport the damage is much more visible, with piles of rubbish everywhere and some streets still flooded. It looks perfect territory for disease to spread.

Otherwise the trip to the airport is straightforward and we arrive in plenty of time – just as well, given the number of security checks we have to go through. The first is at the gate to the airport site – Tahir is not allowed to accompany us beyond this point and we have to get out and put all the bags through an X ray machine before being patted down ourselves. The same thing happens when Tashi drops us at the entrance to the airport building. We fill out forms for foreigners leaving the state, then drop off our hold luggage and go through yet another security check with our cabin baggage. Once this is done, we still have to go out onto the tarmac outside the building and identify our own hold bags. It’s all very good humoured though. The flight leaves on time and we are served a hot sandwich lunch on board, so the journey soon passes. It’s nowhere near as exciting as the flight to Leh, though John does think he can see the Permian-Triassic boundary at Khunamah, from the air.

We are met by the Indus rep and a driver after we’ve collected our bags and are soon on our way back to the Royal Plaza hotel. As we approach the hotel, the streets get very busy – Rahul Ghandi has been speaking at a Congress Party rally, ahead of elections in Haryana, apparently. This time we are on the same floor of the hotel, at least – the eleventh. We decide the view from John and Helen’s room is best and have a cup of tea there before heading out to explore. It’s after 4 pm by now and we think it might be a little cooler but it’s not – the temperature is still in the mid 30s and it’s humid too.

We decide to get a tuk-tuk to the Red Fort and haggle for a price. Mysteriously, the tuk-tuks around the hotel don’t seem to have functioning meters. The driver says we need to get an entrance ticket from the government tourist office and takes us there first but it looks very much like a private travel agency and the man there says the Red Fort shuts at 5 pm and tries to sell us a ticket for the evening’s son et lumiere instead. We are surprised, as we thought it was open till dusk, but explain we haven’t got time for this and decide to at least go and look at the fort from the outside. The drive is longer than we expect and hairy at times in the rush hour traffic but definitely feels like something we should do in Delhi. The Red Fort looks beautiful in the late afternoon sunshine and we fend off all offers from the cycle rickshaw wallhas and set off on foot to walk around it. 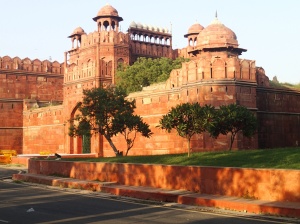 Surprise, surprise – when we get to the main gate at 5.30 there is a ticket booth there and plenty of people still going in – apparently it closes at 6 pm! We decide it probably won’t close promptly and that it’s worth the 250 rupees each in any case and are glad we have, once we get inside. All Delhi seems to be out enjoying the late sunshine and it’s completely hassle free. It’s a shame that we wasted so much time getting messed around by the tuk-tuk driver as we only have time for a cursory look around before the guards start shooing people out. We do get to admire the modern looking roof carvings in the red sandstone Drum Hall and also some of the beautiful inlay in the marble audience chambers, at least. 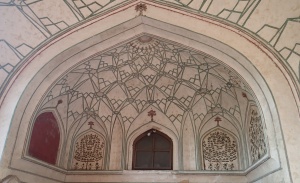 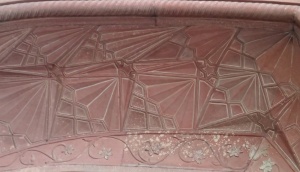 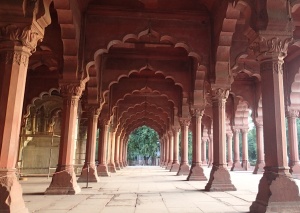 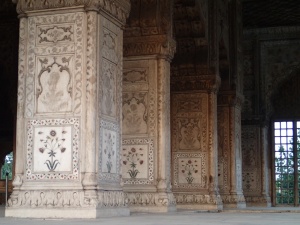 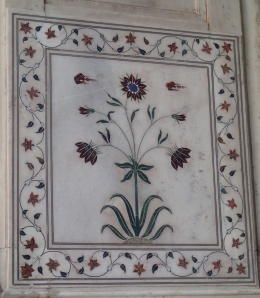 Inside the Red Fort

We have to haggle a bit harder to get a tuk-tuk back to the hotel for the same price but the journey seems shorter this time, maybe because the traffic has eased off a bit. We are all very hot and sticky by the time we get back to the hotel and enjoy showers before we head out again for dinner. We go to the same restaurant as before, which thankfully has no queues on a Thursday evening, and all enjoy different dosais. This time we risk lassi and lime juice to drink, although what we really want is beer. We head further up the road afterwards to satisfy our craving at the nearby Beer Cafe. This serves a huge variety of imported beers, at a price, but we are happy with the usual Kingfisher. After that it’s time to head back for an earlyish night as we need to be up for breakfast at 6.30 am and ready to leave the hotel at 7 to get our flight home. I’ve tried to log onto the internet so I can Skype home but it won’t allow me to, this time. It’s good to have exchanged texts though – it feels very odd to have been completely incommunicado for more than a week.