I slept much better last night, despite quite a lot of early morning barking from the many street dogs.  Some of the group had already been into town for a wander by the time others appeared for breakfast at 8 am. Breakfast was good, coconut pancakes with honey being a personal favourite.

We set off for Thiksey monastery shortly after 9 am, with packed lunches which I hoped would suit everyone’s taste – sandwiches plus paratha and curry. It’s less than an hour’s drive along the Indus to Thiksey and we stopped on the way to look at the enormous convention site at Choglamsar where thousands of Buddhists meet when the Dalai Lama comes to town every year.  Stok Kangri was in the cloud this morning but people found it amazing to think of it being more than 2 500 m higher than the valley bottom where we were standing.

It was still very warm in the sun today, despite the cloud. We spent an hour or so in the monastery at Thiksey, finding more rooms than we did last time and enjoying spectacular views despite the cloud. John got to show people the junction of the Ladakh Batholith and Indus formation sediments from a distance and also talked about the paleolake between Thiksey and Sheh. It was busy with tourists, both westerners and Indians, whereas last time we were there Thiksey felt much more like a working monastery. A very cute monk, five or six years old, was being fed chocolate by lots of visitors to the cafe and being very giggly. 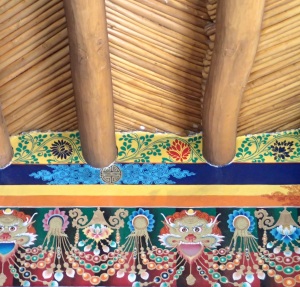 The view East towards Leh, from Thiksey.  Shey palace is on the hill in the foreground.

From Thiksey we drove a few km back towards Leh and stopped at Shey palace. It’s quite a steep pull up the hill and a bit of a struggle in the noonday heat but worth it for more spectacular views. We didn’t spend so long here and, once down, drove across to the picnic area beside the royal fish ponds for lunch.  These ponds are the remains of a large paleolake which once filled much do the valley here. 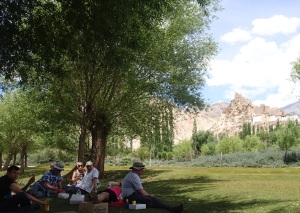 It was very pleasant in the shade of the willow trees there and, after lunch, I talked a bit about the role of stomata and we did leaf peels from the upper and lower leaf surfaces, using nail varnish, to look at back at the hotel. Interestingly, though it felt so hot, the air temperature was only about 20 Celsius – the main contributor is just the intensity of the sun at this altitude.

Mukhter stopped on the way back for me to buy vodka to preserve any diatoms we collect at Pangong, then drove us back to the hotel via Shankar stupa and gompa so that we knew the route in case anyone wanted to walk there later, though I think most people are gompad out for now.  This side of town was absolutely full of young Europeans dressed in full hippy gear – some of the girls looked so like Durham students that I thought I might see someone I recognised!

After a short rest and a cup of tea John, Helen and I wandered back into town, first to visit the Museum of Central Asia and then for some shopping. Getting to the museum involved walking down the street full of bakers using tandoor ovens so we just had to buy a piece of hot, fresh bread to share, for the princely sum of 10 rupees (10 p). 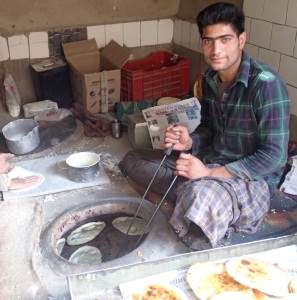 The museum was interesting but still a little empty. It is housed in a modern building, designed in the manner of a traditional Ladakhi defence tower. The walls are made of granite from Shey and each floor is designed to represent a different area – Ladakh, Kashmir, Tibet and Baltistan (Pakistan). The ground floor had more of the photos taken by Rupert Wilmot in the 1930s which so impressed us at Kargil and the top floor had portraits of Ladakhis of widely differing origins with a short account of their life stories, which wa also very interesting. There were also some beautiful paper cuttings, done by a woman called Helena Becker, depicting scenes from the days of the Silk Road trade. I was particularly taken by the grumpy camel… 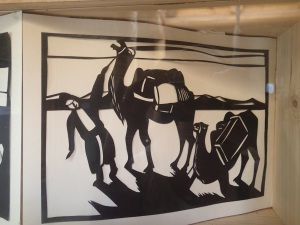 In the museum courtyard people were busy making traditional resources for building – peeling the bark off willow poles to be dried for ceilings and so on.

After the museum we thought we’d have a go at finding some singing bowls. The first place we spotted the plain brass beaten ones we were after only had rather large, heavy bowls, though they did make a beautiful sound. We then went to the Tibetan Refugee market across the road and found just what we were looking for – lovely little bowls about 10 cm across. The pitch of the sound they make is higher, but still true. Helen and I also bought pretty turquoise earrings there.

After dinner, most people came along to our communal space to have a look at the leaf peels and were interested in what they saw – there clearly were more stomata on the lower side of the leaves, fortunately. 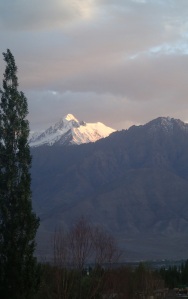