I decided on an early morning outing today and walked up to Shankar Gompa in the cool before breakfast, which was very pleasant. Heading out of town this way you get more of an idea of the Leh of old. There are still plenty of guest houses but also ordinary homes with their plot full of barley or vegetables. The views across to the Zanskar range were lovely too. 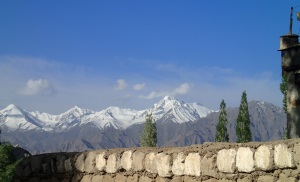 We left at 9 again for Hemis, stopping en route for photos where there is a clear view of the Indus sediments, with the snow-capped Zanskar range behind. As we climbed up the side valley towards the monastery, we passed lots of clumps of pretty white flowers which I later identified as Perganum harmala, a surprisingly delicate looking perennial.

As with Shey and Thiksey, Hemis was much busier than last September, but is big enough to absorb a lot of people and still have lovely quiet corners. It also has a very interesting museum – a slightly random assortment of artefacts, but with at least some explanation. Amongst the most beautiful were travelling cases in wood or paper mâché made to fit the objects they contained precisely, be these tea or coffee pots or ceremonial cymbals. The most entertaining was a travelling box for LPs – the record on display was ‘Wine, Women and Song’, ironically for monks! No photos allowed in the museum, sadly.The location of Hemis is spectacular and John used the opportunity to talk about the conglomerates of the Indus formations on which it sits. On the way down we also stopped to look at some of the lichen covered boulders. 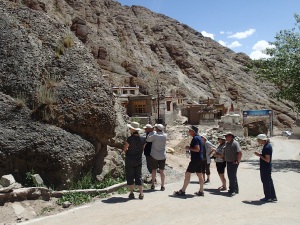 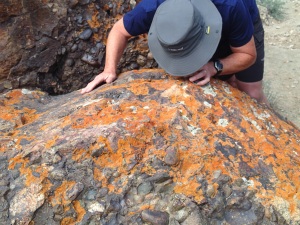 The geology and ecology of Hemis!

From a distance these look very orange and there is certainly a lot of Xanthoria elegans present but there is also a lot black Verrucaria, which some in our group know as ‘desert varnish’ because of its shiny appearance. There was also a surprising amount of grey and even foliose lichen in fissures In the rock, showing how quickly these organisms can start to modify their environment when a little water is present.

Hemis monastery is one of the biggest in Ladakh and has been much added to over the centuries – a big new complex is currently being added to one side and we watched people with Ladakih panniers carrrying building material up and impossible looking slope to a new building above the current site. The older parts towards the current complex were very interesting to a wander around, with their ancient leather prayer wheels and floors polished by the feet of generations of monks.

We headed to Hemis High Altitude National Park for lunch – our picnic site didn’t seem quite as spectacular as I remembered, partly because it was cloudy and partly, perhaps, because this was the first time we got to see the mountains at close quarters last year. The drive in through the Indus formation rocks is certainly very spectacular though. No lammergeyers today, but we did see plenty of the quail-like chokas. Disappointingly, the area where I’d hoped to do quadrats was again grazed very closely, this time by the horses of trekkers who enter the national park here. The Myricaria squamosa and yellow clematis and henbane (Hyoscyamus niger) around our picnic site were beautiful though. 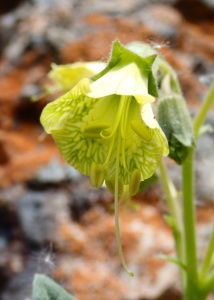 We had a short walk into the park, unfortunately restricted to the road because the fields were fenced off, and did see the beautiful, red flowers of some kind of rhubarb, too high above us on the scree to contemplate scrambling up for a closer look.

We had a bit of an adventure on the way back to the main road when one of the cars ran out of fuel, despite its gauge registering half a tank. Mukhter was not happy but it did give Helen and me a chance for some botanising! Another car set off to get some fuel in a jerrycan but, in the meantime, David had helped them siphon enough fuel from another vehicle to get them to the petrol station. We were back in Leh later than expected as a result of this but John and a couple of others still went to the rock and gem museum for a quick look – not that exciting apparently.

Helen and I ventured into town again as I’d seen nice woolen waistcoats I thought Martyn might like. We sorted that out fairly quickly then thought we’d look for some silver beads. They were real silver, and rather pricey, so we just bought a few but then ended up buying some beautiful turquoise and lapis lazuli beads too…. The T-shirts we were also intending to buy will have to wait until Friday afternoon!

After dinner the wifi was working so well that I managed to post a blog for the first time since Srinagar, as well as e-mailing Martyn.  I tried to reply to a couple of other emails too, but the wifi was feeling overworked by this stage and refused to send them!