I went straight to sleep last night but was woken up an hour or so later by noisy neighbours and struggled to get back to sleep after that. Strong winds and heavy rain in the night didn’t help either. In the morning it was overcast, so  the sunrise wasn’t particularly spectacular.

After breakfast, some of us went down to the lake to collect diatoms – there is a very healthy looking biofilm bubbling away on many of the rocks so it will be interesting to see whether the species present are the same ones as last year. 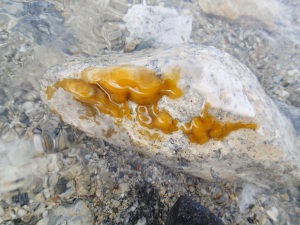 We set off a little before 9 am and stopped to look at the Karakoram fault and for a tea break at Tangtse Gompa. I was worried that we’ve not covered as much ecology as I would have liked on the trip so we had decided to stop at the same place as yesterday to do plant and lichen quadrats before having lunch. We did plant quadrats and had a good look at some of the flowers growing on the other side of the road this time – forget-me-nots, spurge and tiny violets, amongest other things. We also intended to do lichen quadrats but the weather had other ideas! 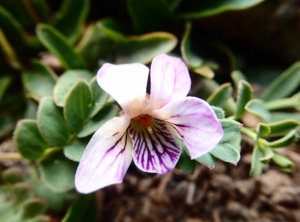 It started to rain quite heavily so we decided to press on and have lunch on the far side of Chang La pass. John thinks we’re experiencing the tail end of the monsoon from further south. The rest of the journey was not pleasant – we were driving through thick mist and heavy rain up to the top of the pass and some way down the other side. Finding somewhere to eat our lunch out of the rain proved difficult – we ended up huddled in some kind of army building at Zingar which smelt very strongly of kerosene, so didn’t linger. Mukhter was worried about stones falling from above as a result of the rain so took us down a rather bumpy short cut to the valley bottom, avoiding some of the long zig zags down the mountain. I think we were all relieved to be down in one piece. The drivers travel the road to Pangong frequently but not often in those sort of weather conditions. They didn’t all seem entirely clear how to stop the windscreen steaming up, for example…

Mukhter was sufficiently unhappy about Camp Shambles to want us to go and tell Danish, at the Grand Dragon hotel, about it so John, Helen and I called in their on our way back. We got the full Grand Dragon treatment of delicious guava juice, followed by kahwa tea and home made biscuits while we waited for him. Danish also invited the whole group to have dinner at the Grand Dragon this evening, an offer which went down very well. We then had a final foray to the shops for T shirts and I bought an elephant-shaped tea cosy for Rosie. I was also egged on by Helen into buying myself a lovely dark red embroidered cashmere scarf.

Dinner at the Grand Dragon was as lovely as expected but the hotel is now dry, so no beer to go with it. People said how much they had enjoyed the trip, which was good to hear, and also had some very constructive suggestions as to how things could be tweaked, for example to include more ecology activities.