An early start for the short drive to the airport and our flight to Delhi this morning. Leh was still looking a bit overcast but beautiful. The airport is probably the smallest I’ve been to but there is pretty strict security – everything seems to go through several scanners and you then have to personally pick your hold baggage out and see it checked into the plane.They found the pieces of serpentine from the Pangong road which I’d forgotten to move from my rucksack into my hold baggage but, in the end, decided to let me keep them – a good thing, as they are intended for Robert. Helen was less lucky with the micropore tape in her first aid kit, which is obviously a dangerous thing to be carrying!

The flight was at least an hour late leaving Leh, and later than that by the time we finally arrived in Delhi, having made several loops in thr flight path on the way south, presumably for air traffic controls reasons. There was no explanation for the delay but people seemed mellow, as if it’s a fairly frequent occurrence.

Delhi looked much like a very wet day at home, if rather warmer. Actually it was full blown monsoon rain and the drive to the hotel took well over an hour because of heavy traffic and flooded roads. We at least we were in a (relatively) dry bus but we passed many poor folk on bikes and in rickshaws, as well as many cars and motorbikes which had broken down because of the water on the roads. Hotel Shangrila-Eros is beautiful but a bit grand for my taste. The new Rolls Royce parked outside gives a clue as to the clientele – from the sublime to the ridiculous after Camp Shambles. Unfortunately the heavy rain made venturing out unappealing – we’d have been soaked to the skin in minutes – and the outdoor swimming pool was closed because of ‘too much water’. We did have a bit of an amble round the gardens in the rain to clear our heads but it really wasn’t worth trying to go any further.

We ate the freebie snacks in my room for lunch then John and I spent much of the afternoon rewriting our itinerary for next year in the light of this year’s experiences and the feedback we’ve had from the group. Looks like we might swap Tso Morari for Pangong Tso (partly because the road is better) and we’ll have people fly straight from Delhi up to Srinagar when they arrive in India to save time and money. Yasin phoned at an opportune moment to see how things had gone so we mentioned some of our ideas to him and confirmed a meeting in a couple of weeks time. Dinner was quite amazing – a huge choice of styles of food, from continental grill through to Japanese and Thai. Helen and I really enjoyed the lovely salads. Good thing we weren’t paying separately for the meal though, given that a half pint can of Kingfisher cost us each a fiver!

I’m sorry the trip is over but keen to get home now that we’re on our way, especially as we could have been in a smart hotel anywhere in the world today – it was a shame not to be able to see anything of Delhi.

Another 6.30 am start for our flight home, this time with breakfast boxes supplied by the hotel, which contained a bizarre assortment of little glass jars to go with the croissant and sandwiches, including ketchup! The drive to the airport was much quicker, at least, and the roads not quite so awash, though it was still raining. It felt like we were at the airport ridiculously early, especially as there were virtually no queues to check in or at security – better than late though.

For some reason John, Helen and I were not allocated seats together but it turned out the plane was far from full so we were easily able to swop, once on board. A daytime flight seems even more boring than an overnight one but I did doze, having not slept very well again last night.  Roll on getting home but not it’ll after seeing Ed graduate at Brunel tomorrow. 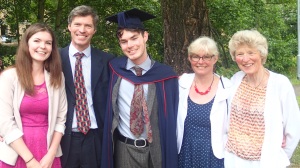