The great wall of Hadrian, Day 3

A lack of forward planning meant we’d found it impossible to find accommodation near the middle section of Hadrian’s wall this bank holiday weekend so we decided on a day trip with a car at either end of the section from Lanercost to Steel Rigg. The car shenanigans and temptation of coffee at Lanercost meant it was nearly 11.30 by the time we left Lanercost to rejoin the wall. We had more company today, in the shape of Susannah and Rosie. 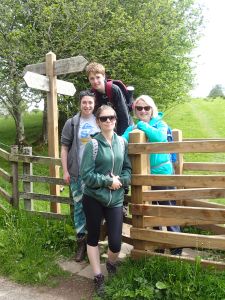 The section of the wall between here and Steel Rigg is both more dramatic and much harder work than the earlier two legs (The great wall of Hadrian, Day 1 and Day 2)– we climbed to the highest point on the wall today at Winshields Crag, but it was far from a continuous, gentle ascent – lots of up and down to contend with.

First the path climbs up to Hare Hill and Banks, then follows the edge of the ridge above the River Irthing towards Birdoswald fort. The verges of the lanes here mostly remain unmowed and host water avens, vetches and pignut in abundance.

The path hugs a long section of rebuilt wall here – Rosie is unimpressed, confessing that her deep antipathy towards all things Roman is the result of childhood disappointment with much of Hadrian’s Wall. She enjoys the lovely meadows full of Germander speedwell and Crosswort which flank the path though.

From some distance away, we hear music and see what look like hangliders and paragliders as we approach Birdoswald. When we get closer, these turn out to be enormous kites, courtesy of Birdoswald Kite Festival. My favourites are the ones which hover like enormous birds of prey but Rosie likes the squid and giant lobster, though the latter doesn’t seem to stay in the air for more than a few seconds at a time. 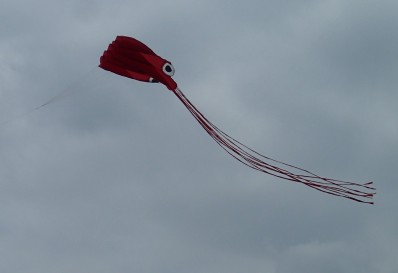 We are too stingy to pay good money to go in but manage to find a good vantage point just outside from which to watch the kites, whilst we eat our lunch.

Some of the kite handlers are very skilled and are ‘dancing’ their kites synchronously to the music we heard earlier – predictably, I particularly like the folk fiddle and kite combo. 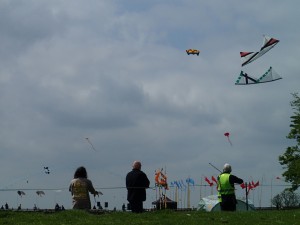 Its beyond Birdoswald that the challenge ahead becomes more apparent. We drop steeply down to the river at Willowford and follow the wall straight up the other side of the valley. 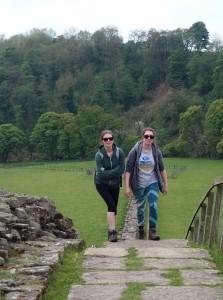 The only detour on today’s walk takes us around the back of Gilsland to avoid a damaged bridge – the park here looks tempting to some of our party but we press on. A bank of late-flowering bluebells brightens up the old Roman road, Stanegate, above the village. 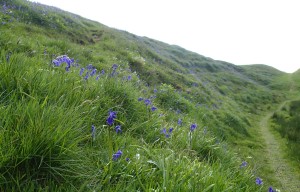 The view from here across to the Whin Sill intrusion which forms Walltown Crags is beautiful, if a little intimidating – we know this is just the first of many outcrops we will climb this afternoon. 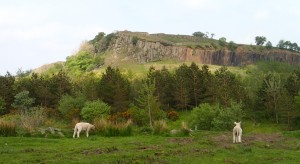 First the path drops down to the road above Greenhead and we see evidence, in the 12th Century Thirlwall Castle, of why the Roman wall looks a little depleted around here!

By this time it is really quite warm and ice creams from the little shop at Walltown and a break to feed the ducks on the quarry pond are very welcome. The pull up from here onto Walltown Crags is steep, but the views from the top are spectacular, in all directions. 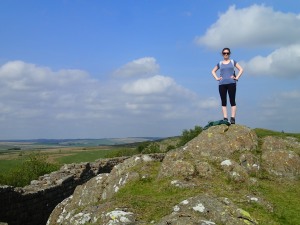 The early evening sunshine gives a distinctly Constable-esque feel to the landscape in places.

By this stage in the walk, the advantage conferred by Robert’s long legs is starting to become apparent, though even he thinks the Romans might have filled in some of the dips with wall to make the going a bit easier!

Robert and I now form the advance party, or at least I have the job of keeping up with him, from Cawfields quarry over Winshields Crag and back to the car parked at Steel Rigg.

We particularly enjoy the trig point on top of Winshields Crag, which marks the highest point on Hadrian’s wall – its all downhill from here!