The Great Wall of Hadrian, Day 6

So, back to more local nature ramblings….  We were back to something more like our original party for Sunday’s walk from Port Gate to Newburn, though with Ed to provide the cabaret again. 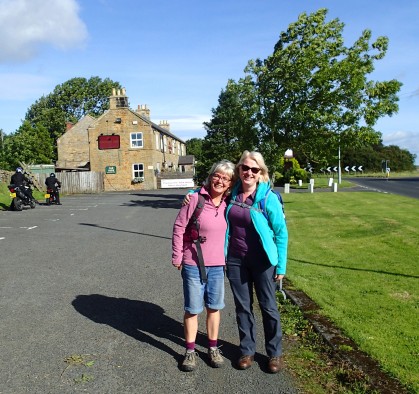 As I’m not one to learn quickly, we dropped my bike at Newburn Riverside Country Park before driving to our starting point.  This section of the walk is very straightforward, following General Wade’s Military road, built in 1752, for much of the way.  It’s mostly downhill, which I should have realised meant my bike ride afterwards would be mostly uphill….

Despite the warm weather, there is an autumnal feel to the day – thistle heads covered in silky down and berries on the trees. 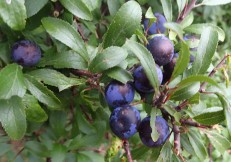 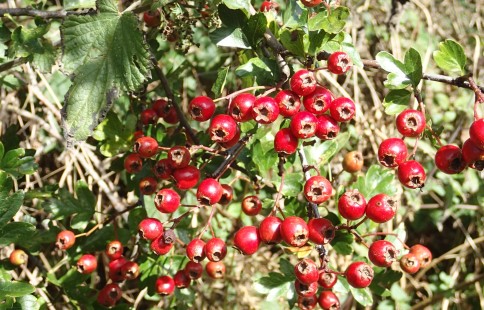 We make good time to the Vallum Farm coffee shop near Wallhouses and have excellent coffee and cake late morning.  Ed has already had lunch, part one, by this time but we managed to get past Whittle Dene reservoir and as far as Harlow Hill before stopping for lunch part two, where we get a view down towards the Tyne. 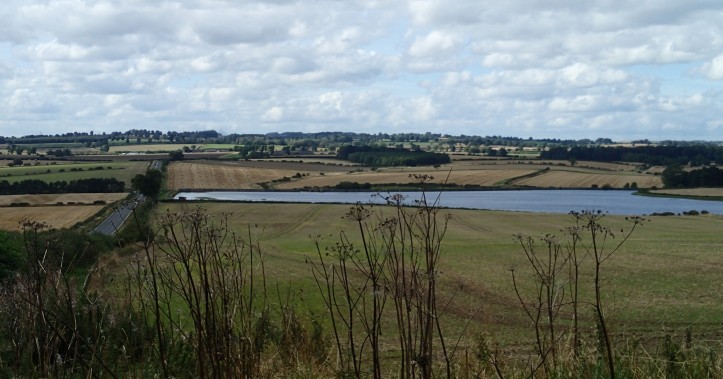 Looking back at Whittle Dene Reservoir

We pass a gate adorned with a heart-shaped chain and padlocks spelling out the word ‘Indians’ – I have no idea about the significance and Ed’s sniggers reveal he has no intention of explaining.  Maybe he has no idea either and it’s all some kind of complicated bluff!

A whole set of beautiful stone buildings are up for sale at Harlow Hill, with planning permission.  I’m particularly taken by the chapel but know that we really don’t have the skills to take on a project like this!

From Harlow Hill the path carries on down towards the A69, past the site of Vindobala fort at Rudchester.  There’s little to see here – apparently the military road was mostly constructed of stone from the wall.  According to William Stukely, an historian at the time, Wade was allowed to, “demolish the wall and beat the stones into pieces…”  Not just the stones of the wall either, but also, “every carving, inscription, altar, milestone and pillar.”  Today the land is home to some very fine Jacob and Soay sheep.

We crossed the A69 and headed for Heddon-on-the-Wall, once known for having the largest section of unbroken wall at its original, planned width.  Now people are more likely to know it as being the village where the 2001 outbreak of Foot-and-Mouth disease originated.  At Heddon we prevaricated for a  while over whether to carry on to Newburn or whether I should take a taxi back to my bike – as always, time seemed to have flown and Ed’s feet were hurting.  In the end we pressed on to Newburn as that way we are left with a manageable length of walk for our final day.

From Heddon the path drops steeply down through fields and the golf course at Close House hotel to give us our first glimpse of Newcastle and the River Tyne.

We should have dropped right down to the river but ended up on the Wylam Waggonway, which runs nearly parallel, instead.  Lots of people were out on bikes enjoying the late summer sunshine and views across the fields around the river.

We walked the last mile or two to the car park where I’d left my bike then I hopped on to cycle the 13 or so miles back to Port Gate.  There is a very steep pull up to Throckley from the river but after that it’s not too bad, though the light was starting to fade by the time I got to Port Gate.  It does feel good having just 13 or so miles left to walk.  The last stretch is pretty urban so we can do it more or less whatever the weather. We’re already planning next year’s challenge – watch this space!