No plant is an island…

One of the less obvious effects of climate change, perhaps, is on the distribution of plants in the Himalayas.  There is evidence that vascular plants are appearing at higher altitudes than ever before, as temperatures rise.  I was intrigued to see in a recent paper in the journal Microbial Ecology (Angel et al., 2016) that six different species of plants have been found at the extreme altitude of 6150 m on Mount Shukulu II, in Ladakh – 15 km east of Tso Moriri, which we visited this summer.

The colonies are now up to 15 years old, so are clearly growing consistently at this height. The plants include Saussaurea gnaphalodes and Waldheimia tridactylites, both members of genera we saw at lower, less hostile environments. 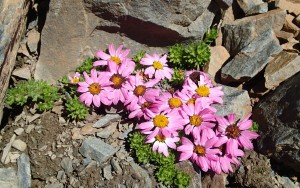 Waldheimia glabra growing at the top of Baralacha La, 4650m 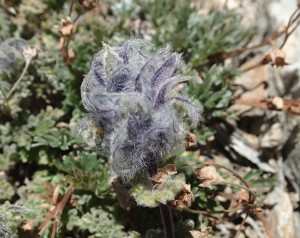 The number of days when there is snow on the ground or snow falling in Angel’s study area has dropped steadily from 273 days in 2009 to 141 days in 2012.  But, despite the evidence for a warming local climate, plants found there still have to endure extreme conditions – a mean annual soil temperature of -8.7 °C and only 12 days when the mean soil temperature was above 5 °C between August 2011 and September 2012.  To survive here, plants have to be compact, tolerant of wind, frost and drought and able to cope with a very short growing season.  Four of the plants they found are perennials and, with annual growth rings just a fraction of a millimetre apart, showing how slowly the plants grow.

One of the reasons finding higher plants at this altitude is so surprising is that the soils here are barely worthy of that name, with very little organic matter available to help retain moisture and supply the mineral nutrients plants need.  Not much has been able to grow at these altitudes until recently and organic matter can only be produced by living organisms, after all.  When rocks are weathered and broken down by physico-chemical processes, microbes do start to move in – a biological soil crust of organisms such as cyanobacteria, for example, can both photosynthesise and fix atmospheric nitrogen (see ‘From Malta to Bowburn’).  These bacteria supply can mineral nutrients, such as nitrogen, to higher plants too.

Instead of mycorrhizal fungi or the types of bacteria typically found in high altitude, temperate soils, Roey Angel and his colleagues were surprised to find bacteria typical of desert soils (Sphingomonadales) associated with the roots of these plants. Once vascular plants are able to get a foothold on previously bare ground they speed up soil development both by adding organic matter and by secreting acids, which enhance weathering of the bedrock to release more minerals.  As a result the plants, in turn, improve the environment for a specific community of soil microbes, particularly those such as nitrogen-fixing rhizobia. Some of the plants on Mount Shukule II had many more species of microbes associated with their roots than were found in the surrounding soil – some of these were probably transported to the site along with the dispersed seeds, rather than being acquired from the soil.  The seeds are acting as an inoculum, helping to establish the mature bacterial soil community which the plants need for their survival.  This raises an interesting question – have seeds evolved to carry microbes which will help them colonise fresh soil or it is just that seeds which don’t carry these microbes won’t survive?