Breakfast at the hotel this morning was delicious – it’s from the sublime to the ridiculous, after Sangla!  There was plenty of choice of both Indian and continental food – I had a delicous dhosa and they made porridge for John.  Actually the mountain of fresh fruit on offer was the most appealing to me.

Sumit came to collect us at 10 am and took us on a gentle amble along the ridge on which the oldest part of Shimla is built; up the Mall to Christ Church in the square, past the Gaiety theatre and into the Cecil Hotel (even grander than Clarkes) for a quick nosy. As the old summer home of the British in India, Shimla has charm aplenty and a slightly surreal ambience.

The church and library on the ridge in Shimla

We ended up at the Viceregal Lodge on Observatory Hill, where the details of the Partition agreement were thrashed out.

Sumit talked about the history of Shimla as a hill station for the British in the late 19th and early 20th Century.  Many of the names of buildings and areas are Scottish, which tickled Helen and John – think Stirling Castle, Annandale and Kelvin Grove!  Many Scots ended up here in the Indian Civil service.

En route we met not one, but two, troops of Girl Guides on holiday in Shimla.  Helen was very popular when they realised she was a guide leader and John managed to get in on the act as a Guide ambassador!  Helen was the one given a new neckie though.

Sumit had arranged a car to pick us up and run us back to the hotel and we popped out to a nearby café and had tasty tomato soup and garlic bread for lunch.

Martyn was in Shimla the same summer as I was in Kashmir and Ladakh, 30 odd years ago, and was keen to re-vist Jakhu temple on the hill behind the ridge.  The Indian government challenged us to get to the top in less than an hour but we can all be pleased that we have the fitness of under 50s as it took us less than 45 minutes to get to the top!

We’d been warned about the enthusiasm of the Macaque monkeys near the temple for removing people’s glasses, and learned the hard way just how adept they are at this. We made it up to the temple safely, having removed our glasses where the monkeys looked most threatening. On the way down though, we forgot; one monkey grabbed Helen’s glasses and ran off before she had a chance to react. Martyn and John rushed off after said monkey, purchasing peanuts from the traders at the top to barter for the glasses. The monkeys have learned how to earn food in a manner anyone trying to train an animal would be proud of. The monkey wouldn’t drop the glasses in exchange for a single sweet or a bottle of water and needed to be convinced it would get a whole packet of peanuts to itself before it would give them up! 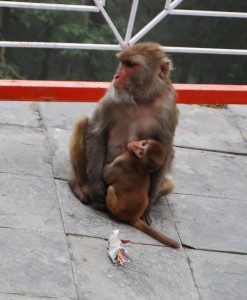 Martyn did get Helen’s glasses back in the end but, while we were waiting I put mine on, only to have them removed equally speedily by another monkey.  One of the traders retrieved them quickly for me, in exchange for yet more peanuts, but not before the legs had been chewed.  Shame that humans apparently don’t learn as fast as monkeys!

We wandered back down the hill and visited the bookshop on the lower Mall which Sumit had told us about – he’s written some books on local history so we bought one, before heading back to our rooms to chill out and, in my case, get some blogs posted.

Helen’s bag was supposed to turn up during the day, but didn’t, so we then had a 9pm ETA.   However now they have promised it by eight o’clock in the morning, so we’ll see….   We dined at a restaurant along the road which had a suitable mixture of Indian and Chinese food to keep everyone happy – very good.