The final day of our walk! Rosie elected to take the train as her feet are more blister than not. At least she got on a train which stopped at every tiny station rather than diminishing my 22 mile day to a 10 minute train ride! Our Airbnb provided a simple breakfast of baguette, butter and home made jam to set us on our way but I stopped at last night’s Boulangerie anyway to pick up a sandwich and Viennoise anyway as today’s route passed through few places where I thought I’d get food.Walking out of Chatellerault in the morning sun was glorious – even the modern concrete bridges look good in the stillness. I noticed again how much freight seems to be carried by rail here, which must help reduce the number of lorries on the road.Beyond Chatellerault the path continues alongside the river before finally crossing it at the pretty village of Cenon-sur-Vienne, which lies at the confluence of the Vienne and the Clain. On the last stretch alongside the Vienne I noticed fenced off gardens without houses between the road and the river bank, in one of which an old fellow was sitting enjoying a beer in the sun, at 9 am! As on previous days, there were plenty of roadside areas demarked as hunting reserves, boar as well as deer mentioned on the signs this time, and I met an elderly hunter on the road after Cenon, complete with rifle and retreiving spaniel. From Cenon, the road takes you to the site of the 2000 year old Gallo-Roman town of Vetus Pictavis, today known as Vieux Poitiers.

And, from here, much of the remaining 25 km to Poitiers follows the route of the Roman road. A long, straight road with no diversionary loops sounds great in theory but, in practice, means you can see far too far ahead where you are going and how completely shadeless it is! That was the biggest problem, with today’s temperature rising to 27 or 28 Celsius in the shade and no shade to be had. I was lulled into a false sense of security by an avenue of trees along the path just after the Roman town but that didn’t last long, sadly.
There was some relief from the heat when the road passed through woodland above the Basse Flotte lake – the south side of the road was flanked by a high, ancient-looking bank, full of wild flowers.

I stopped in the shade for an early lunch within loudspeaker range of the lake where some sort of sailing regatta was going, at a rather sedate pace owing to the lack of wind! 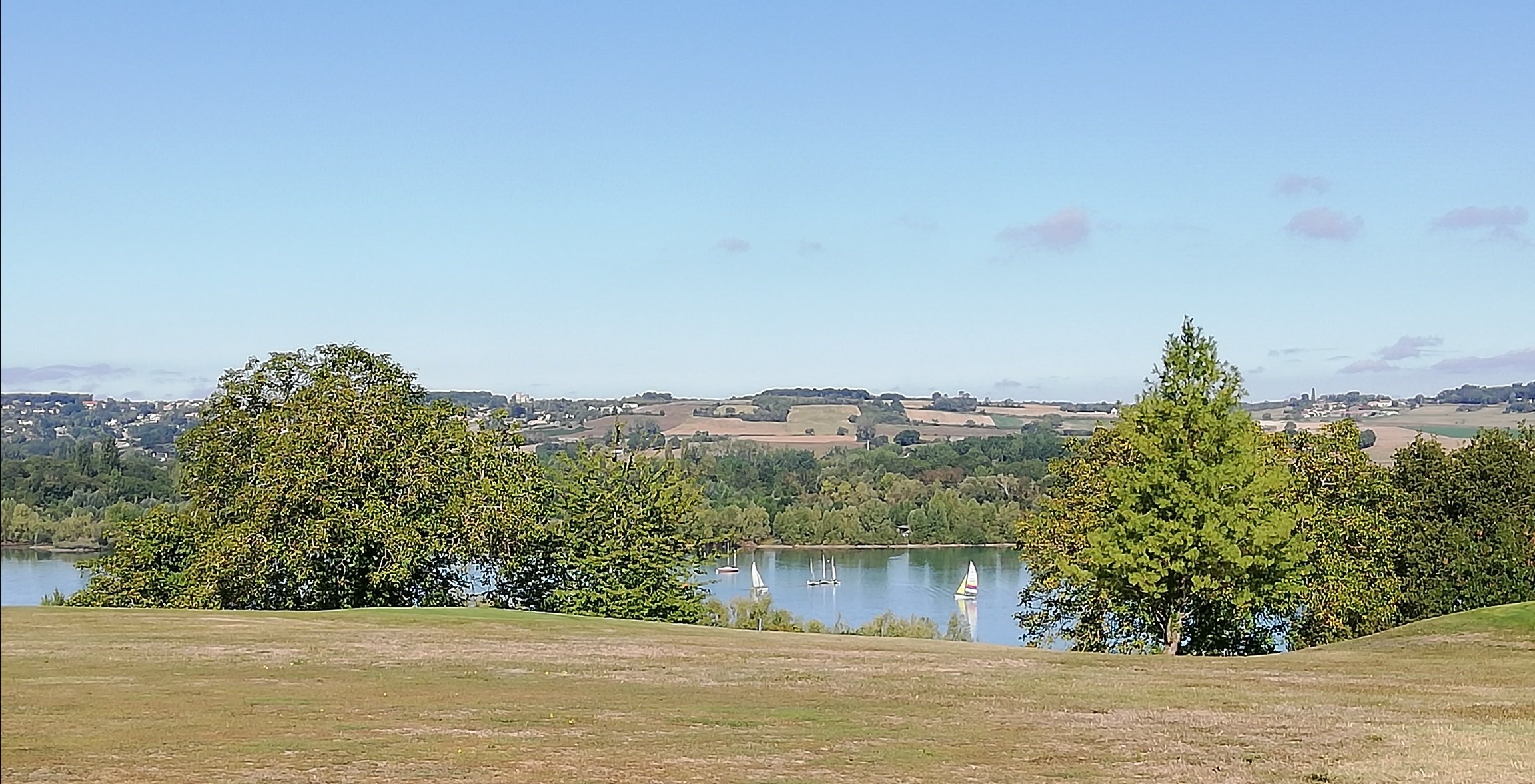 Beyond that, it was back into the sun’s full glare for much of the way to Dissay and then on towards St-Georges-les-Baillargeaux. A couple of large foxes and a deer darted into the stunted looking maize as I walked, whether in search of food or shade, I’m not sure. I prevaricated around St Georges, where a 2 mile walk would have taken me to the railway station and a train into Poitiers but in the end decided to push on on foot (stubborn idiot, I know). Anyway, to cut a long story short I arrived at our Airbnb in Poitiers about 5 pm, footsore and blistered but otherwise none the worse for it. I stopped on the outskirts for possibly the best cold Orangina I’ve ever tasted in a Tabac where everyone else seemed to be there to  bet on the boxing!

Rosie had a bottle of wine chilling in the fridge to greet me, along with a selection of goats cheeses and biscuits, though I did drink a lot of water and tea first! We had tasty tagines in a Moroccan restaurant for our penultimate dinner and are looking forward to a lazy day with no alarms set tomorrow.